The meeting of political families: the Robinsons and the IRR 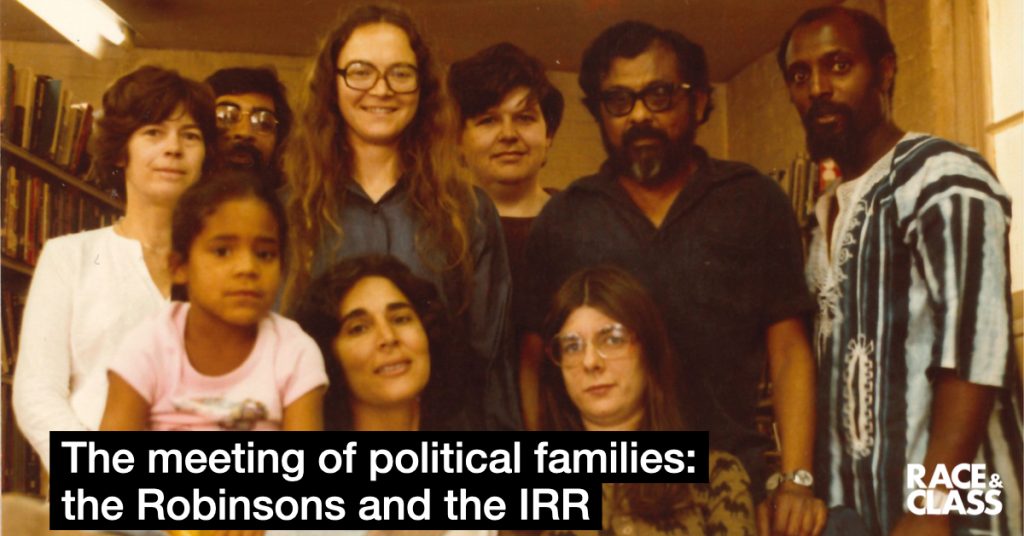 Ahead of the UK book launch of Joshua Myer’s new biography of Cedric Robinson on 11 October 2021, we publish a collection of Cedric Robinson’s key articles in Race & Class, as well as reflect on the long relationship between the Robinsons and the IRR.

Cedric Robinson (1940 – 2016) was one of the most original and challenging radical thinkers in the US, whose work has had a global impact. He made a unique contribution to Marxist philosophy and the development of Black Studies through his path-breaking work which exposed the racial character of capitalism, challenged the Eurocentrism within left scholarship and excavated the Black radical traditions that preceded Marxism. His seminal writings, including The Terms of Order (1980), Black Marxism: the making of the Black Radical Tradition (1983) and An Anthropology of Marxism (2001), continue to gain new significance and urgency in the present day.

Elizabeth and Cedric Robinson forged a life-long connection with the Institute of Race Relations and its quarterly journal Race & Class, where Cedric found a political home for his crucial analysis – which helped shape the journal into what it is today. Following the transformation of the IRR in 1972, and the subsequent reimagining of the journal Race into Race & Class, devoted to ‘Black and Third World Liberation’, Cedric Robinson was one of the key radical scholars that helped to reorientate the journal’s focus – first as a contributor and then as a member of the Editorial Working Committee. Elizabeth became the journal’s unofficial distributor on the US’ West Coast and provided many a contributor with an interview spot on the ‘No Alibis’ radio show for KCSB.

Below we provide an Editor’s collection of some of his many contributions to the journal that explore key figures of the Black Radical Tradition (Richard Wright, Frantz Fanon, W. E. B. Du Bois); the workings of imperialism and the resistance of black social movements; and analyses of the ways in which film and mass media uphold race and class ideologies.

The relationship between the Robinsons and the IRR community was more than a meeting of minds, but a meeting of political families. This mutual understanding was based on a shared knowledge of the continuum between racism and imperialism, of the need to actively build solidarity on a transnational level, and ultimately, as A. Sivanandan asserted, ‘the people we were writing for were the people we were fighting for’ – one of the key tenets of Race & Class and the Institute of Race Relations. These principles were enacted at several key conferences that Cedric participated in whilst in the UK, including ‘Race, class and the state’, organised by Mike Cole and Bob Skelton at Brighton Polytechnic in 1980 and an IRR conference, ‘Race, class and black struggle’ in 1995 where he spoke alongside A. Sivanandan, Jan Carew, Manning Marable, Barbara Ransby and Colin Prescod.

These conferences were key in bringing together a community of radical scholars and activists who found a common cause in the global struggle for human liberation, and a shared belief that ‘the function of knowledge was to liberate, that we should think in order to do’.

The fruits that this mutual relationship yielded is evident in the many resonances between the thought and praxis of A. Sivanandan and Cedric Robinson, including but not limited to, a focus on Black social movements and perspectives, the need to speak ‘from’ the vantage point of the oppressed rather than ‘to’, and a deep sense that the political is also personal – that solidarity must be built at an existential level, too. The cross-pollination of ideas and radical thought resulted in many of Cedric’s radical peers and students publishing in Race & Class, creating a transnational community of militant scholars.

This legacy, of forging collaborative, collective and transnational scholarship, is something we hope to continue with the upcoming book launch for Joshua Myer’s new book, Cedric Robinson: the time of the Black Radical Tradition – with speakers including Joshua Myers, Colin Prescod, John Narayan, Avery Gordon and Elizabeth Robinson. Register here to attend. The event will also be streamed and recorded on Youtube.

Book launch of Cedric Robinson: The Time of the Black Radical Tradition

Read an obituary by Jenny Bourne