Throughout the UK, people from BAME groups are much more likely to be in poverty (ie an income of less than 60 per cent of the median household income) than white British people. In 2015, Pakistani and Bangladeshi communities were the most likely to be in ‘persistent poverty’, followed by Black African and Black Caribbean communities.
One measure of poverty relates to the eligibility of free school meals. In 2012/13, the ethnic groups most likely to be eligible were the Bangladeshi group (38.5 per cent), the Gypsy/Roma group (47.8 per cent) and the Traveller of Irish Heritage group (62 per cent). 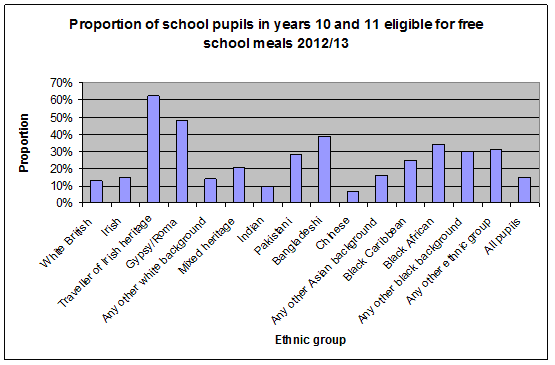 Prior to 2008, ‘White majority’ households had an average weekly income of £508 per week. The Indian group had an average income of £467 per week; Black Caribbean £376; Black African £335; Pakistani £266 and Bangladeshis £245. Between 2009 and 2013, Indian, Black African and ‘Other White’ groups’ incomes decreased by an average of 10 per cent. The Black Caribbean, White majority and Bangladeshi groups saw falls of 3–4 per cent.

In 2009, the Wealth and Assets Survey revealed that the ‘average white household’ had roughly £221,000 in assets, black Caribbean households had about £76,000, Bangladeshi households £21,000 and black African households £15,000. In 2013/14, just under 20 per cent of white individuals had ‘relatively low income’ after housing costs (defined as receiving less than 60 per cent of the median average). The Black/African/Caribbean/Black British groups and ‘Other’ ethnic groups had just over 40 per cent with relative low income.

Drawing on 2011 census data, the Race Equality Foundation shows that Bangladeshi households are 63 per cent and Black African households 75 per cent more likely than white British households to suffer ‘housing deprivation’ (indicators of which include overcrowding and an absence of central heating). White Gypsy and Irish Traveller households are seven and-a-half times more likely to experience deprivation in this way.
In 2011, more than 50 per cent of the people in the Indian, White British, Pakistani, White Irish and Chinese groups lived in a home owned outright or with a mortgage. Home ownership was lowest among Black African and Arab groups (24 and 27 per cent respectively). Home ownership amongst all ethnic groups decreased between 1991 and 2011.

As of March 2015, 5 per cent of White people, 13 per cent of Black (African or Caribbean) people and 9 per cent of Asian people, of working age and eligibility (16-64), were unemployed.

In 2011, about one in four black Caribbean and Bangladeshi households did not have a family member in employment. This figure was slightly less for black African and Pakistani households. Of white British households, roughly 15 per cent did not have a family member in employment.
Throughout the UK, BAME communities are less likely than white people to be paid the living wage. The Joseph Rowntree Foundation showed in 2015 that the ethnic group least likely to be paid below the minimum wage was white males (15.7 per cent); and that which was most likely was Bangladeshi males (57.2 per cent). 38.7 per cent of Pakistani males were paid below the minimum wage, 37 per cent of Pakistani women, and 36.5 per cent of Bangladeshi women. Between 2011 and 2014, temporary working increased by 25.4 per cent for BME employees and 10.9 per cent, according to the TUC. By Autumn 2014, around one-in-ten BME workers were employed in some form of temporary employment.