‘Where was our independence?’ The persistent questions about the IPCC’s Mark Duggan investigation

Last week the Independent Police Complaints Commission (IPCC) report into the death of Mark Duggan exonerated the officers involved – and was immediately condemned by the family as a ‘whitewash’. IRR News analyses previously unreleased internal documents that shed new light on the IPCC’s investigation in the immediate aftermath of the shooting.

Documents released under the Freedom of Information Act (FOI)[1] reveal the IPCC chose to withhold  ballistics information from the public for several days following the shooting. This withheld information was of vital public concern as it proved that a bullet lodged in a police officer’s radio was from a police firearm. It therefore suggested that, contrary to what was circulating in the media at the time, there had been no shots fired by Mark Duggan. The documents also reveal how some of this misinformation actually originated from the IPCC. Overall, the documents raise further questions about the independence and authority of the IPCC – and the extremely close relationship between its press office and the Metropolitan police.

The ‘shootout’ that never happened

On the evening of 4 August 2011, Mark Duggan got out of a taxi on Ferry Lane in Tottenham and was shot twice by ‘V53’, a firearms officer of the Metropolitan police. A police officer was also hit by one of these bullets, which lodged in his radio, and he was taken to hospital but released that evening, unhurt. Mark died from his injuries at the scene.

Widespread references to a ‘shootout’, and statements that shots had been fired at police by Mark Duggan featured in dozens of early news reports about the incident. At least some of this misinformation apparently came from the IPCC. The Telegraph, Evening Standard, Mirror and Independent all repeated the line that the suspect had ‘opened fire’ or ‘fired first’, and quoted the IPCC as the source.

It wasn’t until several days later, on 8 August, that the truth began to seep out, when media outlets reported that ballistics examinations had proved that the bullet lodged in the officer’s radio was police issue. The IPCC refused at first to comment on these reports, then the next day, 9 August, issued a statement confirming the bullet had been police issue.

The inquest jury three years later concluded that Mark Duggan did not have a gun in his hand when he was shot, contradicting the evidence given by V53, who had claimed he had shot in self defence. (Read an IRR News story: Framing the death of Mark Duggan.) Following pressure from the Guardian, the IPCC apologised several days after the shooting for ‘inadvertently’ giving ‘misleading’ information. 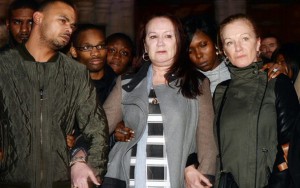 The FOI documents reveal the source of this misinformation: on the evening of the shooting an IPCC press statement was drafted that included the following line: ‘We do not know in the order the shots were fired (sic). We understand the officer was shot first before the male was shot’ (p23 FOI). This line was taken out after concerns were raised by investigators, but was apparently used for just over two hours, which explains how it was picked up by some media outlets.

On the day after the shooting, 5 August, IPCC Commissioner Rachel Cerfontyne (since August 2013 the deputy chair of the IPCC) also circulated a draft press release that contained the line:

‘A non-police issue handgun was recovered at the scene. An officer’s radio which appears to have a bullet lodged in it has also been recovered and at this stage indications are that the bullet has come from the handgun.’

The last phrase was also taken out after concerns were raised by investigators.

Later that same day (5 August), senior staff including the Commissioner were made aware that the bullet was police issue. However the IPCC chose to withhold the information for several days, and eventually released it on 9 August.

Several emails discuss the potential release of the information. A personal email from the Met’s Acting Deputy Commissioner Bernard Hogan-Howe (since August 2011 the Met Commissioner) on the evening of 8 August specifically requested that the IPCC continued to withhold the information, stating: ‘it is our professional assessment that it has a potential to negatively impact on public perception of the MPS in certain communities, and that this has the potential to spark disorder.’

The IPCC Commissioner recorded in the information logs that the reason for withholding the information was that she wanted the police officers to be able to write their statements without knowing it, and also citing concerns about ‘the immediate priority of the Met to deal with the violent disorder’ (p. 19 FOI). However, IPCC staff were only too aware there could be an embarrassing leak, and drafted a press release to prepare for that eventuality. The Commissioner is also recorded as having said she was ‘relieved we didn’t say anything about the bullet Friday as we have [sic] then been blamed for the riot’ (p. 31 of FOI).

‘Where was our independence?’

In its public statements, the IPCC continually stresses its full, independent and robust investigations. Yet the correspondence reveals a relationship between the press office and the police that some would consider too cosy. 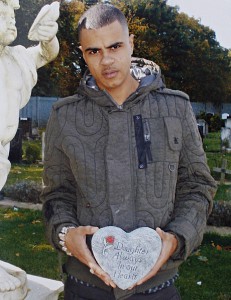 On a number of occasions over the few days following the shooting, the IPCC’s press releases were sent to the Met for comments before being released. The emails record that at the Met’s specific request, the first press release by the IPCC on the evening of the shooting included a line that a firearm had been recovered from the scene (p. 4 FOI).

In general, the IPCC does not appear to have had a problem with disseminating the police’s account of this fact, before it had had a chance to conduct its own investigation. But at least one member of staff was concerned. Nicholas Long commented, on 7 August (p. 57 of the FOI disclosure): ‘If I were a family member or member of the public critical of the IPPC, I would be asking where was our independence (if we accept the word of the police without question)?’

The IPCC’s lead investigator Colin Sparrow also appears to have briefed colleagues on the basis of police accounts – which were later found to be untrue by the inquest jury. The information logs record that on the morning of 5 August, Sparrow briefed colleagues that the ‘Deceased produced a handgun’ (p. 27 FOI). This was apparently based on information provided by the police, but was disbelieved by the inquest jury, which found that Mark had thrown a gun away from the minicab.  Sparrow also briefed colleagues that morning that the bullet in the police radio was ‘likely’ to have come from the handgun recovered from the scene (p. 27 FOI, see also p. 23).

When it came to the difficult matter of releasing the ballistics information, the IPCC appears to have been pressured to continue to withhold it by police. Other emails between IPCC staff observe that ‘the MPS was clearly working on the IPCC at different levels last night’ (see p. 55 FOI) before listing four IPCC staff who were apparently pressured with regard to media engagement. Several other references are made to ‘high-level MPS pressure’, and to the ‘MPS Commander’ putting ‘pressure’ on IPCC Commissioner Rachel Cerfontyne in these few days.

At the pre-inquest hearing in December 2011 the IPCC’s Colin Sparrow apologised for the misinformation, saying it had been ‘a mistake’. The IPCC’s reports into the incident have been critical of the way in which information was shared with the police, and recommendations were made to improve communications.

But there has been no public acknowledgement of the more insidious factor that underlies the mistakes. These documents suggest the IPCC was far more concerned about protecting the police from criticism, than holding them to account.

A spokesperson for the IPCC told IRR News: ‘It is on public record that a mistake was made in the early hours of the shooting which lead to some misleading information being provided to journalists regarding an exchange of shots. Any reference to an exchange of shots was not correct and did not feature in any of our formal statements. The IPCC has publically (sic) clarified this point through a statement on its website; at an appearance before the Home Affairs Select Committee; in media interviews; and at the inquest into the death of Mark Duggan. The IPCC apologised to Mark Duggan’s family and has tightened internal procedures as a result of lessons learned.’

IRR News story: The spotlight is back on black deaths at the hands of the police

[1] The set of internal documents obtained via Freedom of Information request include email correspondence between the Independent Police Complaints Commission (IPCC) and Met police staff, as well as internal IPCC correspondence and draft press releases. They can be accessed in full here (large pdf file, 7.9mb).