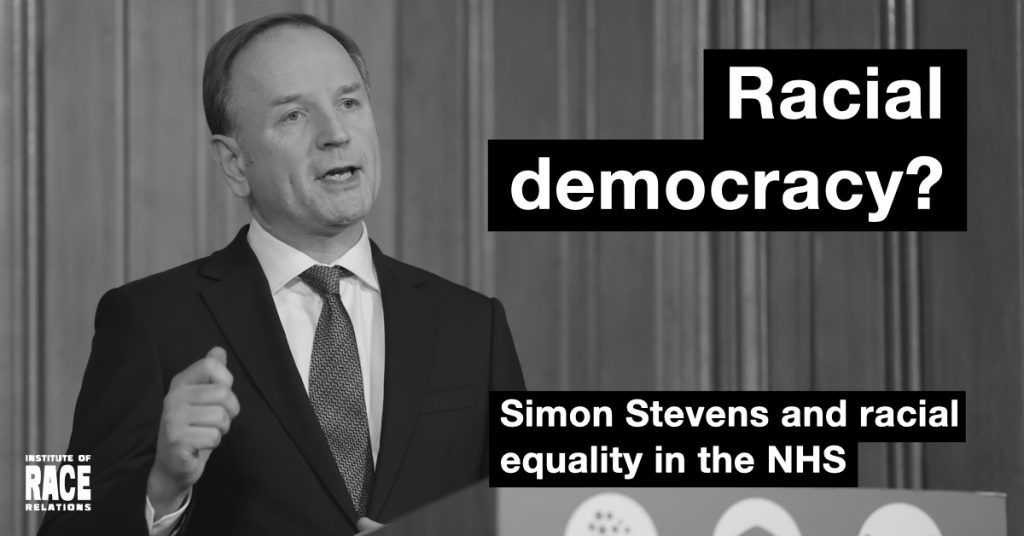 Simon Stevens and racial equality in the NHS

As NHS England bids farewell to its chief executive Simon Stevens, Black health activist Wayne Farah takes a critical look at the direction of travel on racial equality under his leadership.

Simon Stevens, who stepped down as NHS chief executive at the end of July, is lionised by some as a champion of race equality. But to me, his efforts – the Workforce Race Equality Standard, regional Equality Diversity and Inclusion frameworks (Midlands, London, Nursing and Midwifery), and numerous Race Equity Action Plans and Impact Assessments – were pragmatic, technocratic and predictably ineffective, for two reasons. One: organisations are not shaped by heroic leaders but by material realities, and two: Mr Stevens has sought to promote what is sometimes called ‘racial democracy’, ie, ethnic representation or diversity, rather than confront racialised injustice and inequality.

The material realities shaping the NHS stem from a neoliberal political economy that promotes self-interest, unfettered markets, and the idolisation of the private sector. Led by politicians who reject social safety nets (including the NHS) as inhibitors of free markets, and efforts to combat racialised inequalities as inconsistent with a biological nationalist view that racial inequalities have a genetic basis,[1] the NHS is supported by a public who mostly don’t share traditional NHS values and see themselves as primarily consumers of its services.[2]

‘Racial democracy’ theorists assert correctly that race should not impede individual liberty, but conclude wrongly that equality will be achieved when all social hierarchies – from the prison to the boardroom – reflect the ethnic composition of society. By focusing on the distribution of societal goods within hierarchies, ‘racial democracy’ concerns itself with the mathematics of inequality, not the injustice. This is neoliberal social justice, where there is no question of redistribution, and equality is redefined as incorporation into the existing hierarchy for a select few.

Determining who will be incorporated drives the NHS focus on the ethnic distribution of jobs and services. Race and ethnicity are both simple categories of social hierarchy that reflect patterns of social relations, not phenotype differences, ahistorical nature, or primordial group affinities. The race / ethnicity distinction is relatively new: for centuries there were only races, with the English race sitting comfortably alongside the Nordic, Slavic, and Aryan etc. Then in the 20th century they were homogenised as White. Whiteness as an ethnic identity evolved gradually in relation to the incorporation of migrant populations. Migrants that could not be absorbed into ‘White Britishness’ or condemned to ‘Blackness’ were offered opportunities to be incorporated into the racial binary as an ethnicity. The whiter they looked, the more they could seek acceptance and associated privileges as an ethnic group. Consequently, ethnicity stands in relation to white supremacy, not in opposition.[3]

This was how and why the 1962 Commonwealth Immigrants Act laid the foundations for the Windrush scandal. It nationalised racism by formalising the privileges given to migrants from the old (White) Commonwealth over those from the new (Black) Commonwealth. Institutionalising the racial hierarchies of employment and care in the NHS saw Caribbean nurses given inferior State Enrolled status and doctors from Africa, India, and Pakistan funnelled into the Cinderella services such as geriatrics.

‘Racial democracy’ doesn’t want to overthrow hierarchies, only diversify them. This fuels the NHS’s obsession with ‘ethnicity’, because it helps illuminate progress towards diversity. Focusing on ethnicity obscures the common experience of dehumanisation shared by racialised communities. It promotes conflict as communities compete for representation, and redefines inequality as evidence of individual and communal failure. Ultimately it exempts the state from responsibility for the litany of ill effects created by the inequality it promotes.

‘Racial democracy’ theorists recognise that racism is woven into hierarchies of power and exploitation, but are concerned only with the individual and his/ her role in the hierarchy. The theory conflates individual prejudice with institutional racism, and personal power and privilege with institutional power and interests, reducing the fight against racism and exploitative power structures to a fight against individuals. Individualising the problem casts institutional racism as a malfunction, which exempts the organisations from having to change, by allowing it to address the malfunction through targeting the ‘unconscious bias’ of individual perpetrators. This is usually effected through a programme of ineffective ‘sensitivity training’ that often reinforces existing biases, but gives organisations legal protection against accusations of discrimination.

The promotion of ‘racial democracy’ has also made disparity the prism through which all racialised communities are analysed and understood by the NHS. Disparities analysis generates more myths than insights, because it draws on quantitative data drawn from pre-defined administrative or demographic variables and ignores variables not captured by such data. It utilises socially-defined racial categories as valid analytic variables, and then deploys multivariate statistical analysis to identify racialised differentials in outcomes and risk ratios. From such a simplistic understanding of racism, disparity analysts reported up to 4.3 times higher Covid mortality.[4] The disparity is asserted to be caused by racism – or race – but there is a failure to specify the exact mechanisms by which the inequity is produced, or how to combat it. Variations in death rates within racialised communities are ignored, assumed to be unified vertically (by class) but disaggregated horizontally (by ethnicity). Racialised disparities are posited as arising from failures within the system. But NHS leaders understand the inverse care law, that market distribution of medical resources skews distribution of medical care towards the most privileged. They use market mechanisms to distribute NHS services and resources because promoting equality is not their objective.

The embrace of disparity analysis has facilitated the rehabilitation of race science within the NHS. This is why Covid researchers suggested disparities were ‘only partially attributable to pre-existing clinical risk factors or deprivation’ and the ‘remaining part of the difference has not yet been explained’. The proposition of vulnerability beyond clinical and social risk factors points directly towards biological vulnerabilities based in race.

The false idea of race is now so normalised in the NHS that it is being used to explain all things Black, from Covid deaths to higher rates of infant mortality, mental ill-health, diabetes, and hypertension. This is racist in the precise sense that it uses social categories as proxies for genetic similarity, gives superficial group differences unwarranted significance, locates health inequalities in genetics not political economy, and thus recasts social inequalities as biological realities. This has led to speculation in the Journal of American Medical Associations that Covid disparities arise from enzymes in Black people’s noses, and to calls by some scientists for ethnically stratified social distancing.[5]

The normalisation of race science recasts evidence of racialised injustice and inequality as evidence of the existence of biological races with inherent weaknesses. In ignores the physiological and epigenetic impacts of exposure to the distress of racism as an independent variable in the social determinants of health.

The creation of race

‘Racial democracy’ depoliticises racism by ignoring the mechanisms and processes of the state and political economy through which the ideology of racism is made into the racialised structures that create the material reality of race. The distribution of Covid deaths, and other health inequalities, arise because race is a proxy for the socio-economic status, for the poverty and segmentation of the workforce and physiological distress caused by racism. Race is a product of racism, and therefore health inequalities don’t reflect the mysteries of biology but the brutal truth of health under capitalism and racialised care by the NHS.

The ‘racial democracy’ strategy helped to reconcile the NHS with the priorities of its political masters, which meant the maintenance of racialised inequity and injustice. As the Windrush scandal made brutally evident, the NHS is no longer a universal service with a social justice mission. It is an organisation that is comfortable leaving migrants and black British citizens alike to suffer and die as a direct result of a racist policy.

That policy, the ‘Hostile Environment’, was not imposed on a reluctant Mr Stevens by the Tory party. It was a New Labour innovation, developed when he was working as one of Tony Blair’s key health policy advisors. New Labour’s 2004 Regulations[6] first propagated the myth of a link between asylum seeking, health tourism and the viability of the NHS, and forced NHS Trusts to abandon open access. The regulations were introduced despite concerns over the culture of suspicion inhibiting access to health care for all racialised communities and the increased risks to public health which this would entail – concerns that were shown to be prophetic during the pandemic, leading some NHS leaders to call for the charging policy to be abandoned. These calls have fallen on deaf ears, leaving people to suffer ongoing abuse.

Simon Stevens reduced the struggle against racialised inequality and injustice to a campaign for ethnic representation and incorporation into the reformed snowy white peaks of the existing NHS hierarchy. Those with a stake in this hierarchy may see him as an ally. For the victims of the hostile environment, and those caught by its culture of suspicion, his legacy is nothing to celebrate.

Wayne Farah has 20 years’ experience as a non-executive director of NHS boards.

On political economy: Doyal, L and Pennell, I, The Political Economy of Health, Pluto, 2014.

On the Windrush scandal: Gentleman A, The Windrush Betrayal: Exposing the Hostile Environment, Guardian/ Faber, 2019.

On conflating individual and institutional racism: Sivanandan, A, ‘Left, right and Burnage’, in Communities of Resistance, Verso, 2019.

On race science: Sani, A, Superior: the return of race science, Fourth Estate, 2019; Fields, K and Fields, B, Racecraft: The soul of Inequality in American life, Verso, 2014.

[1] See Institutional racism in the NHS intensifies in times of crisis, IRR News, 23 April 2020; see also Adam Rutherford, How to argue with a racist, and his discussion 31-45 minutes into this video

[6] The NHS (Charges for Overseas Visitors) (Amendment) Regulations 2004. See Joint Committee on Human Rights, 10th report of 2006-7, paras 124ff for the effect of the regulations on refused asylum seekers and undocumented migrants.

Excellent article which needs wider exposure. I do feel if you could get it into Counterfire, it would get a wider audience. I am particularly interested in mental health and the NHS (I am a therapist) and racism regarding this area. The situation is really quite shocking. Perhaps someone could write on that? Many thanks for this and I absolutely agree with what it says.

I am so glad that we are finally talking about the distinction between equality and diversity – too much of the public sector have been confused and dazed about this. This has just led to wider inequalities