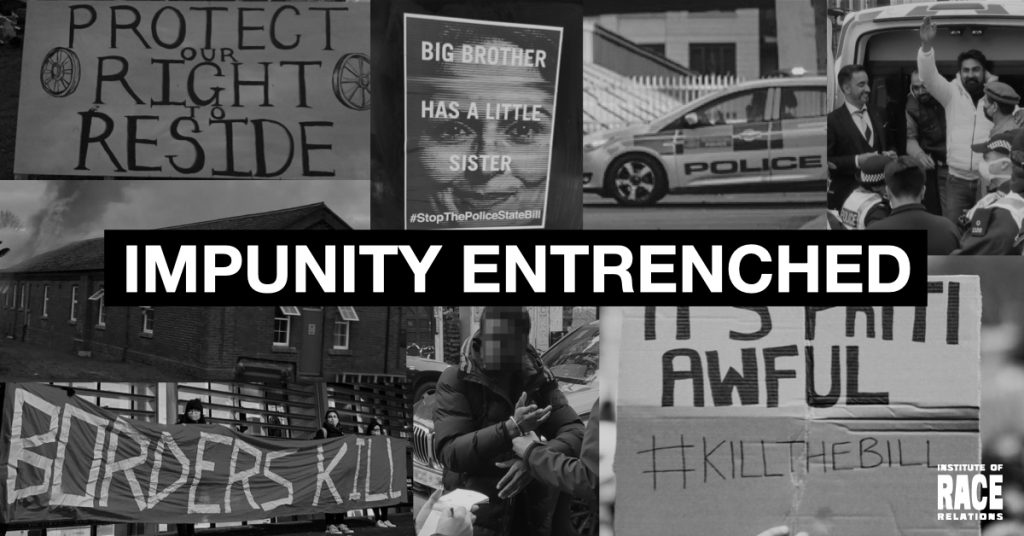 As 2022 begins, its difficult to keep up with the legislative and policy changes threatening human rights. To help understand the sheer proliferation of government measures and proposals put forward over the past year, from Monday 17 January 2022, the IRR publish a five-part resource, Impunity Entrenched, authored by IRR Vice-Chair Frances Webber.

On each day that week, Webber reviews Borders and Immigration, Policing, Ministerial impunity and the rule of law, Free expression and equalities, and Human Rights.

Perhaps one of the most shocking acts of the government in 2021 was the clause in the Nationality and Borders Bill excluding officials from liability for deaths in the Channel during pushback operations. The clause went through the Commons unscathed, its third reading on 8 December a mere fortnight after 27 people drowned in the Channel when neither British nor French authorities allegedly responded to distress calls from their sinking dinghy.

The entrenchment of impunity exemplified by the clause, the protection of state officials and contractors prioritised above those whose rights they violate, was one of the themes of 2021, which saw a consolidation of the government’s authoritarian grip on civil society, in measures and proposals ranging from ‘offshoring’ or tagging asylum seekers to criminalising humanitarian volunteers, journalists, protesters, Gypsies, Roma and Travellers.

The Police, Crime, Sentencing and Courts Bill, introduced in March, attacks Gypsies, Roma and Travellers, racialised groups and protesters, while giving vast new powers and protections to police. The Overseas Operations Act came into force in April, with its presumption of impunity after five years for most crimes committed by soldiers on operations abroad. In May, the Home Office opened a consultation on updating official secrets legislation, which proposes to put whistle-blowers and journalists on a par with spies, and with no public interest defence to charges involving disclosure. In July, the home secretary tabled the Nationality and Borders Bill, giving effect to her New Plan for Immigration, which effectively destroys the right to asylum, as well as basic fairness in losing citizenship. The Elections Bill, also introduced in July, attacks the voting rights of vulnerable and marginalised communities; the Judicial Review and Courts Bill of the same month restricts rights of appeal and further erodes the legal accountability of the executive. The Covert Human Intelligence Sources (Criminal Conduct) (CHIS) Act, which came into force in August and September, grants blanket immunity to undercover police, security service personnel and informants for any crimes they commit in the course of the state’s business. A consultation opened in December on a reform of human rights law proposes turning human rights into retractable privileges.

The sheer proliferation of measures and proposals, many targeting marginalised and racialised groups, makes it difficult to absorb their enormity and their likely impact. The government’s legislative programme entrenches the demonisation and criminalisation of unpopular minorities, while giving unprecedented powers to police, hobbling the courts, nobbling regulators and blocking effective legal, political and public accountability for ministers. The authoritarian reshaping of society is enabled and masked by a constant barrage of verbal attacks on ‘wokery’, defiant justification of over-policing of racialised groups, aggressive denial of structural racism and of the pernicious lasting impacts of colonialism and slavery, and a reshaping of equalities and human rights to prioritise and protect selective forms of ‘free expression’ over the rights of minorities to live in peace.

Together, these measures, informed by an ideology of punishment and exclusion, will destroy the right to asylum, fill the prisons, create further divisions in society and exacerbate racial tensions and hatred, while entrenching the powerful by blocking routes to political, legal and public accountability. What they all share is a retreat from values of fairness, equality and basic human decency, in favour of strong-arm policing of minorities and dissent at home, abroad and on the borders, within a punitive, crude, nationalistic political culture.

Impunity Entrenched begins on Monday 17th January. Check back on this page from then and join the conversation on Twitter.

An important resource – great work, as always, by Fran Webber!