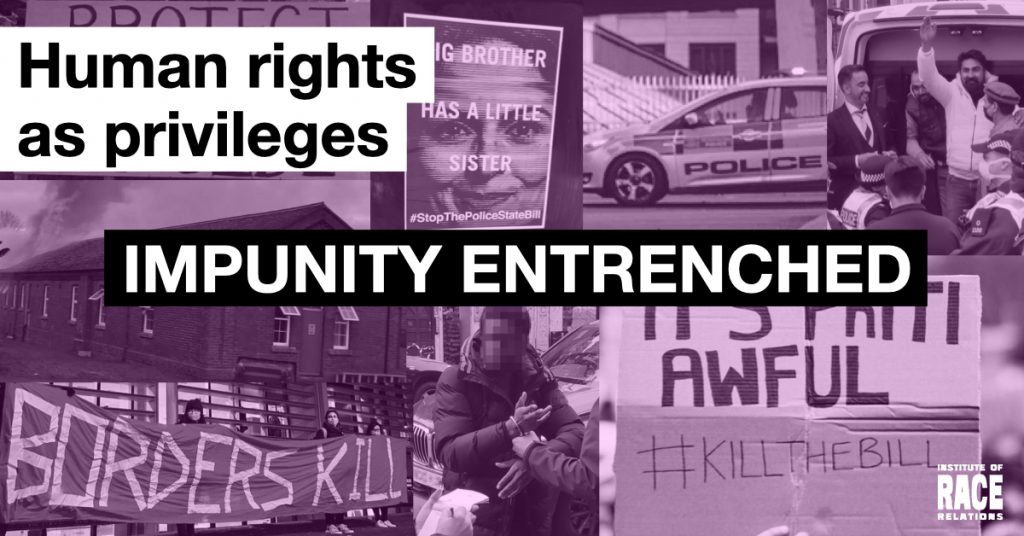 The measures proposed in the consultation on reform of the Human Rights Act are not merely an ‘unashamed power grab’ by a government seeking to put itself above the law, but in seeking to deny rights to ‘undeserving’ groups, they deny the universality of human rights and entrench a nationalistic and divisive political culture.

From Human Rights to the Bill of Rights: protection for whom?

‘Human rights are a privilege, not a right.’ This is not a quote, but it might as well be, accurately representing as it does the government’s attitude to human rights, at least those of non-native Britons, running through the government’s consultation paper on a Bill of Rights to replace the Human Rights Act, published in December. Human rights are supposed to be universal, attaching to every human being by virtue of being human. But if Thatcher’s motto was ‘there’s no such thing as society’ the motto of this government could well be ‘there’s no such thing as human rights’, only privileges, conferred by virtue of birth (race and class), wealth or naked ambition and self-interest. For the rest, human rights, according to this government, have to be earned.

The underlying theme of the paper is how to get round the obstacles presented by international human rights obligations. Perceived flaws in the Human Rights Act include the growth of a ‘rights culture’ and judicial extension of human rights obligations – concerns not shared by the Independent Review of the Human Rights Act, IHRAR, which reported in October (although its report was only published with the consultation in December), and whose members (bar one) felt the Act and the judges applying it were generally doing OK. So by and large, IHRAR’s recommendations – mostly to do with public education on human rights and the working of the protection system – were marginalised or ignored. A government which complains of a ‘rights culture’ is unlikely to support public human rights education! Instead, its preferred solutions include protection of state officials and contractors from ‘abusive’ human rights claims; instituting an expensive ‘permission’ stage in human rights claims to deter ‘spurious’ claims; removal of rights from the ‘undeserving’, in particular ‘foreign criminals’; legislating to limit the scope of ‘positive obligations’ (such as adequate investigation of deaths, or warning subjects of death threats), and preventing judges from interpreting laws so as to give effect to human rights when that was not Parliament’s intention. The consultation expressly asks consultees to come up with solutions to more difficult problems such as how to get round the Refugee Convention’s non-refoulement obligation in tackling ‘illegal’ cross-Channel migration.[1]

The proposals will potentially put the UK in breach of the European Convention on Human Rights. The consultation affirms that there is no intention to leave the Convention, merely to ignore it, and the rulings of the European Court of Human Rights, if it disagrees with them. It may ask Parliament to vote on whether to comply with adverse rulings, but the UK courts are to comply with British law first.

No family life for ‘foreign criminals’

Dominic Raab, justice secretary, lord chancellor and deputy prime minister, is among ministers who have had the Human Rights Act in their sights for over a decade. (Theresa May was another.) A particular bugbear is prisoners’ rights, whether that is the right to vote, or – even worse – ‘foreign criminals’ relying on their rights to respect for family and private life to argue against deportation. Anyone who has sat in on an appeal against deportation by a foreign offender knows how hard it is to win on these grounds. Since 2007, deportation of foreign nationals committing specified crimes, or sentenced to 12 months’ imprisonment, has been deemed ‘conducive to the public good’ and is mandatory unless removal would breach Convention rights,[2] and in 2014, Theresa May as home secretary initiated a ‘deport first, appeal later’ policy for foreign offenders, excluding only those whose deportation would lead to ‘serious and irreversible harm’ such as torture or death. The policy, which effectively prevented deportees from appealing at all, was struck down for unfairness by the Supreme Court in 2017. But the 2014 Act also contained a statutory declaration that ‘the deportation of foreign criminals is in the public interest’ for the purpose of weighing family life against the public interest in cases raising human rights – a declaration judges are expected to follow.[3] Judges, whether in the first-tier tribunal or the higher courts, are not pushovers, and It takes truly exceptional circumstances to defeat these statutory presumptions. The pandemic has taught us that skype or zoom calls are no substitute for physical contact with loved ones, which might have led to hope that a more sympathetic attitude to separation of families would be adopted. But the Bill of Rights will either remove completely (one option) or severely restrict the ability of foreign offenders who have served a prison term to rely on family ties in the UK to prevent their deportation and permanent separation from UK-based family. And in general, those complaining of violations of their rights will have their own behaviour scrutinised, with remedies adjusted accordingly.

Another bugbear for Raab is the extension of liability for human rights abuses to soldiers in foreign operations. Recently declassified documents reveal how in 1965 a ‘dirty tricks’ arm of the Foreign Office incited anti-communist massacres In Indonesia which left hundreds of thousands dead. The revelations add to the known atrocities, open and clandestine, committed or instigated by British forces and intelligence services during and after anti-colonial liberation wars in Africa and Asia. More up-to-date revelations of British forces’ brutality abroad came in November, as it emerged that the Ministry of Defence had paid out several million pounds in the past year to settle 430 civil claims against British soldiers for assault, unlawful detention, beatings, hoodings and other cruelties in Iraq and Afghanistan from 2003 onwards. Also in November, the High Court began hearing claims of a series of massacres of Afghan civilians by the SAS over a period of weeks in 2011, which were allegedly covered up. The government is determined to reverse the effect of the ECtHR decision of Al-Skeini, dating from 2011, which ruled that the UK government had breached its obligation to carry out an effective investigation into the deaths of six Iraqi civilians killed by British soldiers in 2003 during British security operations. The Overseas Operations Act, which came into force in April, is designed to put a stop – not to the abuses, but to liability for them. It enacts a presumption against prosecution of British soldiers committing crimes on overseas operations after five years (except for torture,[4] war crimes and crimes against humanity as defined in the Rome Statute of the International Criminal Court), and a six-year ‘limitation period’ for civil actions arising out of operations which cause injury or death. The message this legislation gives to the world is that the UK’s vaunted justice, rights and democracy are for a select few, not for all. But the government is prevented by the Al-Skeini decision from introducing complete impunity for soldiers abroad. The Human Rights Act reform consultation proposes to try to reopen the issue of extraterritorial jurisdiction and temporal limitations on rights with the Convention institutions.

The incremental nature of the attacks on human and civil rights conceals their cumulative impact, as does the sheer volume and complexity of the law. The Joint Committee of Human Rights called in May for a review of all 85,000 fixed penalty notices issued for breaches of lockdown regulations, arguing that the system is ‘muddled, discriminatory and unfair’, disproportionately affecting the ‘usual suspects’: the poor, the young, ethnic minorities. This targeting occurs through the processes identified by Sir William Macpherson in 1999 as institutional or structural racism even when it is not the intention of the law; how much more so when the law itself is imbued with racist assumptions, as is so much of the legislative proposals and drafts reviewed above.

The furore over clause 9 of the Nationality and Borders Bill was a moment of public realisation of the hollowness of Britishness itself, a status believed stable and secure, turning out to be fragile and precarious, removable with no notice, for certain citizens. Many more have realised the ‘deportation logic’ driving the borders and asylum measures and the fragility of rights of dissent and protest.

As for the government, it is clear from the behaviour of not a few ministers, officials and Downing Street staff during the pandemic, from illegal parties to lobbying for and awarding multi-million pound contracts to cronies, that they feel they are above the law. The government is doing its best to make it so, by insulating itself and its agents from meaningful and effective accountability. We are living a sort of eighteenth-century Stalinism: a ruling-class culture of arrogant law-breaking and ostentatious corruption within the framework of a no-holds-barred vulture capitalism, combined with intensive surveillance, bureaucratic micro-management of people and their lives (while offering little protection for them or their livelihoods), and an insistence by government that public bodies enforce its nationalistic and divisive ideology.

This is the fifth of a 5-part series, Impunity Entrenched, examining the sheer proliferation of government measures and proposals put forward during 2021. IRR Vice-Chair Frances Webber reviews Borders and Immigration, Policing, Ministerial impunity and the rule of law, Free expression and equalities, and Human Rights. Read the whole series>

[3] Nationality, Immigration and Asylum Act s 117C (1), inserted by the Immigration Act 2014. On the importance of this declaration and its impact on the rule of law see Sheona York, The impact of UK immigration law – declining standards of public administration, legal probity and democratic accountability, Springer, forthcoming.

[4] The exclusion of torture from the presumption against prosecution followed a hard-fought campaign during the Bill’s passage.