On Friday 19 July violence broke out in the Paris suburb of Trappes as young Muslims protested outside a police station at what they described as the provocative treatment of a veiled Muslim woman and her elderly mother. The violence continued on the following night, and a 14-year-old boy suffered serious eye injuries after being hit by a rubber bullet.

The mainstream media are presenting the violence purely as a protest against the burqa ban introduced in 2011 by President Sarkozy, under which around 300 women a year have been fined or given compulsory ‘citizenship training’. They point to the fact that it is the Muslim holy month of Ramadan, suggesting that the violence was somehow the inevitable result of the participants’ religion.[1] But according to representatives of the Muslim community, it was the aggressive, insulting and violent behaviour by police who use the ban as a pretext to harass the Muslim community, which sparked the protests.

The website of the Collective Against Islamophobia in France (CCIF) reported on the police misbehaviour that triggered the violence.[2] CCIF stated that violence against French Muslims had increased sharply in the weeks leading up to the incident, which happened on Thursday 18 July. The young woman, Hajar, who had been subjected to force the previous day during an identity check at Trappes, contacted CCIF, and told them what happened. During the check, her mother was pushed violently and her husband was abused and arrested when he protested.

‘They wanted to check me because I wear the full-face veil. As usual, I complied, and was about to lift my veil when I saw police officers violently pushing my mother. I told the other officers to look at what their colleagues were doing, that it was unacceptable, that they shouldn’t touch my mother who had nothing to do with the check. My husband asked them not to touch my mother, who was not involved in the check, and one officer became very angry, saying in an aggressive and scornful tone, “What are you gonna do?” I intervened between them to stop things getting worse.

Once the policeman had finished with my mother, he came to me, waving his hands in front of my face and speaking aggressively. I was frightened, and asked him to be quiet. Then he grabbed me by the top of my veil and dragged me by force and pressed me onto the car bonnet, yelling: “You’re talking to me? You’re talking to me, huh??” I turned and saw my husband on the ground, held by two policemen who were putting handcuffs on him.

In the police car, they yelled at us as if we were dogs. They threatened my husband, “What are you gonna do now, huh? B*****d!”, aiming blows at him with their clenched fists in the car. When we arrived at the police station, people were calling me “ghost” (because of the full-face veil). I kept asking God for help against this violence.’[3]

Hajar’s husband was held in custody for a court hearing on Saturday 20 July, with prosecutors alleging he had tried to strangle the officers who were carrying out the check on his wife. On Friday, around thirty local people went to the police station to demand the release of Hajar’s husband.[4] Police refused, and according to CCIF, unceremoniously ejected a number of people who went to the police station to try to calm things down, including the Imam of the local mosque. More people joined the crowd outside the police station, things were thrown, riot police were brought in and the situation escalated, with stone-throwing, cars and buildings fired, and tear gas and rubber bullets deployed against the protesters. At least ten people were arrested, and according to police, the unrest spread over the weekend to the nearby towns of Elancourt and Guyancourt. A similar outburst of anger had occurred a month earlier when authorities stopped a 25-year-old veiled woman in the suburb of Argenteuil.[5]

Racist and violent policing of banlieues 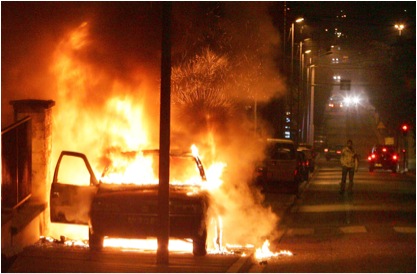 The high-rise suburbs, or banlieues, ringing Paris and other French cities, are notorious for the racist and violent policing of their large immigrant and minority ethnic populations by police squads. In 2012, French police were accused by American human rights group Human Rights Watch of carrying out identity checks based on race, and a study by the Centre National de la Recherche Scientifique (CNRS) showed that people of Arab appearance were eight times more likely to be stopped than white people, and black people six times more likely.[6] The worst riots in modern French history occurred in 2005 after the deaths of two youths, Zyed Benna, 17, and Bouna Traoré, 15, who were electrocuted while hiding from police in a sub-station. In October 2012 France’s appeal court ruled that police who failed to come to their aid could be prosecuted for endangering life, but arguments continue in the local courts.

In the aftermath of the 18 July events, CCIF called on the police to ‘fulfill their mission to protect the population without intimidation or provocation’, and challenged the Minister of Interior Manuel Valls, who had expressed his ‘affection’ for the Muslim community just two days before, to ensure that Islamophobia was stamped out.[7] Valls meanwhile was busy defending the burqa ban, saying, ‘The law banning full-face veils is in the interests of women’ and was necessary to deal with radical Islam.[8] He also defended the police, saying he did not doubt ‘for an instant’ that the police officers acted with respect towards the woman when conducting their checks.[9]

Read a story from Ceasefire: ‘A new generation rises up against police violence‘

Collective Against Islamophobia in France (CCIF)

An update on the situation in Trappes:

On November 8, 2013, Cassandra Belin’s husband, Michael Khiri, who had been arrested for allegedly violently attempting to prevent Belin’s identity check by the police in Trappes, was sentenced to three months in prison and ordered to pay a 1,000 euro fine by the Criminal Court in Versailles.

On January 8, 2014, Cassandra Belin has received a suspended sentence of one month in prison for allegedly insulting and threatening the police attempting to check her identity, and has been ordered to pay a 150 euro fine for “wearing clothing that obscures the face” by the court in Versailles.