Call for end to CPS inaction 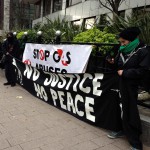 The demonstration was called by the United Families and Friends Campaign and Stop G4S because of procrastination about whether to charge those involved in the deaths of Azelle Rodney and Jimmy Mubenga. Damning unlawful killing verdicts were recorded into both of these deaths this year. The event was also supported by the families of Sean Rigg, Habib Ullah, Anthony Grainger and Christopher Alder, who are also still waiting for the CPS to make decisions on whether to prosecute those involved in the deaths of their loved ones. 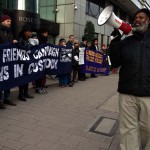 Since the demonstration   took place on the morning after Nelson Mandela’s death was announced, a number of speakers spoke evocatively of the man and his impact. Marcia (sister of Sean Rigg) and Nasrit (sister of Habib Ullah) were amongst them. And a letter supporting the demonstration, calling on the CPS to take action, was published in the Guardian with  key  activists concerned about criminal justice supporting: ‘the families’ call to end the agonizingly long time endured as they wait to hear whether anyone will charged in connection with the deaths of their loved ones … for the decision-making process to be transparent and for full reasons to be published. The public interest requires the CPS to ensure that no-one is above the law.’

The United Families and Friends Campaign