Why we should we wary of the modern slavery agenda 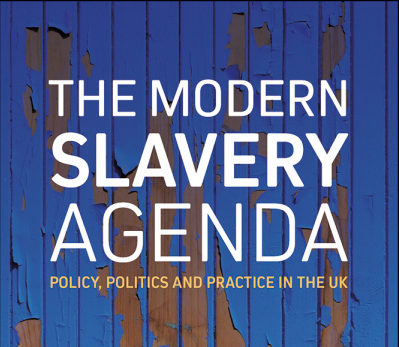 A new book on forced labour, trafficking and other forms of extreme exploitation encourages reflection on the duplicities and contradictions in the current debate.

What is ‘modern slavery’? What is being done to combat it, and with what results? As home secretary, Theresa May oversaw the passage of the Modern Slavery Act of 2015. Her government is fond of boasting that its measures to tackle ‘modern slavery’, forced labour and human trafficking, culminating in the Act, are ‘world-beating’. A timely and important new book, The Modern Slavery Agenda: policy, politics and practice in the UK, demonstrates the hollowness of that boast.

The huge changes seen in the global supply chain and the global labour market in the past couple of decades have created insecurity, precarity and misery for vast numbers of workers all over the world. Migrants and refugees, forced to move to find work or safety, often end up in the very worst conditions, their vulnerability to exploitation through poverty and marginalisation exacerbated by debt bondage, or by an immigration status tied to a specific employer, or the condition of deportability brought about by having no status, which employers can use to their benefit. At the November 2018 London hearing of the

Permanent Peoples’ Tribunal on Violations of the Rights of Migrant and Refugee Peoples, which focused on workplace rights, we heard evidence of horrendous abuses in many sectors in the UK, including warehousing and logistics, hospitality and cleaning, care and domestic work, agriculture and food processing.  An important question raised by the book is: what is gained and what lost, by framing the issue as one of ‘modern slavery’?

What emerges from the careful analysis by different authors – in particular, in the chapters by Ruth van Dyke on the UK response, Alex Balch on the organisational and regulatory challenge, and Hannah Lewis and Louse Waite on migrant illegality and exploitative work – is that such framing fits with a criminal justice response, rather than one centred on tackling labour exploitation or on human rights. The criminal justice response targets individuals or criminal networks while avoiding an examination of the structures – in particular the immigration controls, the ‘hostile environment’ and the criminalisation of unauthorised work, which allow extreme exploitation, forced labour and related abuses to thrive.

Kate Roberts’ chapter on domestic workers demonstrates the paramountcy of immigration control and the blindness to its malign effects. Overseas domestic workers were – and are – subjected to extremely high levels of physical and sexual abuse and workplace exploitation. Before 1998, they came in on six-month ‘visitor’ visas, with a handwritten endorsement ‘accompanying (named) employer’, tying them to the employer they came in with, however abusive,whom they could not leave without risking deportation. In 1998, following a marathon campaign, domestic workers won the right to remain and to switch employers, with a route to settlement after five years in the domestic work sector – rights which, by treating them as workers, immeasurably improved their conditions. Both rights were removed in 2012 by the coalition government, which was more concerned to ensure that wealthy visitors were free to bring in their servants without worrying

Workers can, of course, seek a referral as victims of trafficking or modern slavery through the National Referral Mechanism (NRM) – but as van Dyke and Roberts both note, that means, first, meeting a high threshold of proof; second, not being permitted to work during the period of ‘recovery and reflection’ while awaiting a decision from the NRM – supposed to be 45 days but frequently three times that length – and third, having no automatic right to remain even if they are conclusively recognised as victims. At most, they might get a two-year visa. Who would want that, rather than recognition that domestic workers are above all workers, who should be treated as such? It is not surprising then that many, not only in domestic work but in other sectors where extreme exploitation is the norm, remain in or return to it rather than consent to referral to the NRM. Once again, the government’s fear that migrant workers would abuse the system – its rationale for refusing to grant the right to remain to all those recognised as victims by the NRM –leaves those workers open to abuse.

Another area where immigration control trumps protection is the government’s failure to honour its commitments to child refugees in transit in Europe, through the family unity provisions of the Dublin Regulation and through the Dubs amendment, with its promise to bring in vulnerable lone children from the camps. It’s a pity that Chloe Setter does not refer, in her chapter on child trafficking, to these failures, or to the government’s refusal to support family reunion rights for child refugees in the UK, which would allow their parents to join them: these factors hugely increase children’s vulnerability to exploitation. Her coverage of the procedural failures and inconsistencies within the fragmented system of child protection in the UK is harrowing in its implications.

As Patrick Burland shows in his chapter on the treatment of trafficked ‘cannabis gardeners’, even on its own terms, the criminal justice approach is strikingly unsuccessful given the resources provided. It is not just bad at identifying and prosecuting perpetrators, but it consistently prosecutes victims. The criminal justice system fails to identify those prosecuted for drug cultivation as trafficked (which should trigger the statutory option not to punish them), and even when they are identified as such, no consideration of the no-punishment option owing to widespread ignorance of the law on the part of the police, prosecuting and defence lawyers and judges.

A related problem is the fragmentary nature of the UK’s policy initiatives, highlighted by van Dyke and Balch. The Morecambe Bay tragedy of 2003, when 23 Chinese cockle-pickers drowned and were found to have been suffering extreme exploitation, led to the formation of the Gangmasters’ Licensing Authority (GLA) in 2004, with a remit to monitor labour suppliers in specific sectors, to grant or withhold licences and to take enforcement action where necessary. Two problems dogged it from the start: its limited remit, and the fact that immigration officers always tagged along on raids. So an exploitative gangmaster might be exposed, even prosecuted, but those exploited might end up in detention or on a plane home. And while the 2016 Immigration Act turned GLA into GLAA (Gangmasters’ Licensing and Abuse Authority), extended its remit to more sectors and gave it a Director of Labour Market Enforcement and more powers, what it gave with one hand it took away with the other by making it a criminal offence to work without authority.

While the book’s main focus is the UK, the first and last chapters, by Aidan McQuade and Klara Skrivankova respectively, look at the global and the European context to the UK’s Modern Slavery Act – taking us through the UN Protocol against Trafficking in Persons 2000 (the Palermo Protocol), the Council of Europe’s 2005 Convention against Trafficking, the EU Directive, the UN Guiding Principles, and the plethora of international and national initiatives and bodies set up to implement their obligations. Vicky Brotherton compares the Scottish and northern Irish legislative response to that of England and Wales – frequently to the latter’s disadvantage. In another important chapter, Colleen Theron discusses the global context from the perspective of the supply chain, examining the extent to which reform and transparency in supply chains, pledged and legislated for following disasters such as Rana Plaza, have been buried, sidelined or undermined by corporate outsourcing.

It is difficult to do justice to the breadth and depth of expertise, information and analysis in this densely packed book. There is a vast amount about the history of policy initiatives, and discussions on the terminology, on the constellation of factors creating or enabling trafficking and extreme exploitation, and on the degrees of state responsibility, which I have not touched on here. In an edited compilation, there is also, inevitably, some overlap, and contributors vary too in their degree of scepticism over the anti-trafficking and anti-slavery measures they describe. But whether they take government efforts at face value or not, all share the frustration of seeing how the system fails victims, and how an obsession with immigration control not only undercuts protection but helps create the conditions in which forced labour and extreme exploitation can thrive.