Why the voluntary sector is under threat

A report into the independence of the voluntary sector holds important lessons for groups struggling for funding and their very existence.

The voluntary sector is under threat. So, who cares, you might reply, everything is up for grabs these days. It is not enough to throw up ones hands and see the demise of the Third Sector as inevitable or unimportant or nothing to do with politics. To have a strong, independent voluntary sector is the lifeblood of struggles for justice. It is the sector which can campaign for change, can articulate the voices of the unheard and powerless, take on the ‘unpopular’ issues and challenge orthodoxies. But to do those things it has to be independent and truly distanced from both centres of power and private profit. And in both these areas the sector is being undermined. 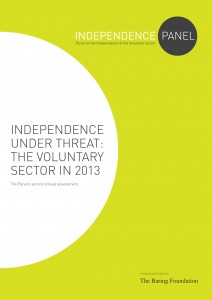 A recent report, Independence Under Threat: The Voluntary Sector In 2013, from the ongoing Panel on the Independence of the Voluntary Sector (funded by The Baring Foundation) makes a searing critique of the trends which pose a threat to the independence of the sector in 2013. The findings of this quite establishment and reputable group should be heeded and discussed, if not campaigned on, by every group working in the voluntary sector. For it highlights just how market forces – outsourcing of key services, the incorporation of the Third Sector into the tendering process, payment by result, target-setting, the blurring of demarcation between private enterprise and social endeavours – are transforming the nature of many NGOs. Of course the report does not openly speak out against neoliberalism and the ‘market state’ (as identified by A. Sivanandan[1]), but that is what its keen observations in The Barometer of Independence add up to.(p6)

Independence matters, it states, because amongst other things, the voluntary sector can innovate, take risks, tackle social problems where people have nowhere else to turn, and ‘speak truth to power’. This necessitates independence of ‘purpose, voice and action’. Today voluntary groups find themselves facing a dramatic rise in demand just when their income plummets. The panel focuses ‘on the sector’s relationship with the state, including indirectly, as it is increasingly encouraging the voluntary sector to sub-contract with private sector organisations. Some are multi-national corporations with considerable muscle and limited accountability.’ Some groups can ‘focus on mission rather than money,[and] walk away from restrictive or inappropriate partnerships’. Others can draw on their ‘knowledge power’ of their clients, but this does not prevent them from being told to toe the line and mute their criticism by funders and those who issue contracts. Small organisations are just not geared up for the contracting culture.

In terms of the ‘loss of the sector’s distinctive identity’ the report does not mince its words. ‘The voluntary sector is increasingly being treated in funding, contracting and regulatory arrangements as interchangeable with the private or public sectors – potentially a mere arm of the state, a delivery agent or sub-contractor without an independent voice.’ What is more, private sector organisations are calling themselves ‘social enterprises’ which will lead to a loss of respect for the voluntary sector’s independence. Independent governance is being threatened when local authorities insist on placing their representatives on community organisations’ boards. And groups need access to diverse sources of funding, yet state funding has shifted from grant-making to targeted contract funding – which reduces the influence and power that groups have to ‘resolve problems’. Fearing for their survival, groups begin to self-censor and for ‘those that do speak out, there is a growing climate of opinion against the campaigning activities of charities’. The government, according to the report, advised local authorities to stop funding ‘fake charities’ that ‘lobby and call for more state regulation and more state funding’.[2] There is a risk that ‘the trend toward fewer infrastructure bodies, and the withdrawal of government subsidies will reduce the voice of the less powerful parts of the sector’.

It is a report that should be studied and debated by all trustees in the voluntary sector; and there are concrete recommendations that can affect practice in the short- and long-terms. For the overall assessment for 2012 concludes, ‘The situation is dangerous … Society will certainly feel the impact, with diverse voices becoming increasingly silent, narrowing political debate, and charities looking to their contract term rather than their mission when vulnerable people turn up on their doorstep for support.’

And that has a very particular resonance when it comes to ‘race’ and immigration issues. These are already the contentious ones, the ones that the tabloids mythologise and misrepresent as of nature. It is here that people face double oppressions – of poverty or homelessness plus discrimination, unemployment and rightlessness by statute – while the whole populace is being schooled into hate, vocal local services closed down and state agencies veer towards dismantling anything that still smacks of multiculturalism (which is now said to promote separatism, disharmony and extremism) or fighting racism (which is now officially a thing of the past).

One of the most important sections in the report is that relating to state funding and contracting arrangements. It is not just that grants are being supplanted by contracts but that grant funding is being drastically cut, especially for those organisations working with the most disadvantaged. And contract funding will never be directed at supporting experimentation and risk-taking – which are key to the sector. Worse, as the Director of Clinks said in his evidence to the panel, over ‘the last ten years … the sector increasingly saw its role as winning contracts, with the expertise of boards and staff shifting to support the goal’. It was, he felt the role and mission of organisations he worked with to represent those on the margin. Other groups gave evidence to the effect that contracts skewed activities and were generally too prescriptive. It was also noted that large private contractors can be trying to enhance their social profile by harnessing a voluntary sector group to their bids. (And recent evidence suggests that this has even given private sector corporations access to charitable funds eg from the Big Lottery Fund.) Payment by results is another issue that voluntary groups can be dragged into via a contract. This can mean that voluntary groups act as sub-contractors to powerful private sector organisations (who put in the bids) and then find that the risk has been transferred to them, especially if they do not meet expected targets.

In all fairness, given that IRR News has been critical of the way that a number of voluntary groups have taken on government contracts in controversial areas relating to asylum, with Barnardo’s working with detained asylum-seeker families being a case in point, it should be pointed out that Barnardo’s has taken a lead in terms of highlighting this panel’s findings. Clearly Barnardo’s are discussing the contradictions that now face organisations like theirs. And there may be an argument for saying that every contract needs to be assessed on a case-by-case basis. But every group needs to be having this discussion about the sector, realising the imminent danger posed to the independence of and therefore the rationale for voluntary groups. Who knows, it could be the start of a concerted campaign to prevent the end of voluntarism as we, not Cameron with his bogus Big Society, know it.

Read an IRR News story: ‘Detention by another name‘

Read an IRR News story: ‘Citizens UK – for the people or the state?‘

Read an IRR News story: ‘The baby and the bath water: community cohesion and the funding crisis’

[1] A. Sivanandan, ‘The market state v the good society’ Race & Class, January 2013. [2] See 50 ways to save: examples of sensible savings in local government , Department for Communities and Local Government, December 2012.