Whose freedom? Whose movement? Whose rights? 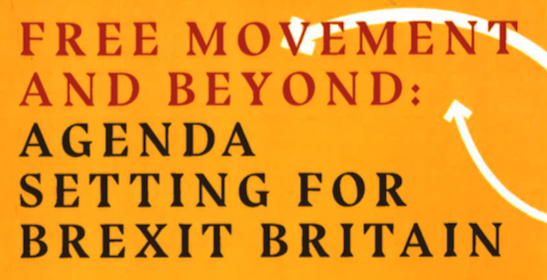 A new book on Brexit and freedom of movement raises more questions than answers.

The corporate venue, the glitzy offices of Bloomberg LP’s European headquarters in the City of London, speaks of a lifestyle a million miles removed from lives now lived in Labour’s old working-class heartlands. But it was here, in a location that epitomises the victories of the neoliberal global elite, that former Labour prime minister Tony Blair delivered his address to the nation, urging British people to ‘rise up’ against Brexit. Blair is a millionaire many times over and, for those he seeks to represent, the line opposing Brexit is clear. But where does his call to arms leave the rest of us? Can a progressive defence of freedom of movement, by necessity rooted in the values of anti-racism and social justice, distinguish itself from a neoliberal defence of freedom of movement that sees that freedom as a vital component of an unfettered market economy − the global supply chain of capital and labour. In search of answers, though still suspicious of arguments that treat freedom of movement as an abstract, divorced from both economic realities and political ideologies, I turned to Free Movement and Beyond: Agenda setting for Brexit Britain, a new collection of essays edited by the British peace campaigner Kate Hudson. 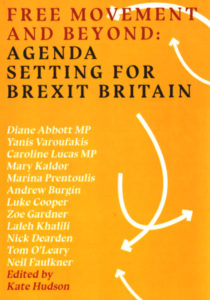 All the authors – from politicians like Caroline Lucas and Diane Abbott, to respected academics like Luke Cooper and Mary Kaldor and grassroots scholar-activists like Marina Prentoulis, spokeswoman for ‘Another Europe Is Possible’− represent particular voices on the Left from the Remain camp. In a beautiful, almost heartbreaking introductory essay, Yanis Varoufakis, former finance minister in the Syriza government, recounts his own attempts to resist the neoliberal principles inherent in the EU decision-making process that brought Greece to its knees. Yet he ends with a passionate defence of the EU on the grounds that ‘the disintegration of this frustrating alliance will create a vortex that will consume us all – a postmodern replay of the 1930s’. Varoufakis’ defence of the EU, given all that Greece has suffered, is humbling.

Though a number of other contributors’ inflated, moralistic tones (for instance, describing the EU as ‘the world’s most successful peace project’) go a tad too far, academics and activists attached to ‘Another Europe is Possible’ are more in line with Varoufakis. They describe how frustrating it is to be put in the invidious, albeit vital, position of defending the EU. While, they argue, we must not accept the insular, nationalist and racist tone of Brexit, we also should not accept the destructive neoliberal policies of the EU. Veteran analyst and campaigner Mary Kaldor implores that pressure be put on the EU, to transform it into ‘a new regional model for global governance … a mechanism for taming globalisation’ and ‘protecting local levels from the storms of globalisation’. Nick Dearden, director of Global Justice Now, berates the EU for ‘the failure of social democracy’ across the European continent ‘to confront the politics of neoliberalism’. This, in turn, gave rise to the disastrous Brexit result which threatens to plunge us even further into the depths of neoliberalism, albeit of a Tory nationalist variety, with the current government containing ‘the most dogmatic pro-liberalisation and deregularisation ministers in modern history’.

But it’s on the issue of free movement, the central issue of the book, that, paradoxically, the contributors fall down. The question, as to whether freedom of movement is an abstract good and a progressive, socialist principle, needs to be teased out but never is. The vantage-point seems to be that of EU citizenship rights alone, and several authors write of ‘mobility’ as though it were indeed an abstract, ethical value, in and of itself, stressing the ‘overwhelming arguments for building a more, not less, mobile world’. This sounds a bit removed from the real world. If you are wealthy, highly-skilled or well-educated, yes, mobility is an ‘overwhelming good’, but for the vast majority of those who move between countries, movement is forced, not a matter of choice. Leaving aside the global context of the massive forced displacement of people by war or economic and environmental catastrophes, who has not met young people from Hungary, Greece, Spain, Portugal, etc, who are working in the UK, not through a positive choice, but because they could not get jobs in their own countries, because those EU countries have been subjected to the kind of structural adjustment programmes and mass privatisation project that the IMF, World Bank etc have imposed on the global South? Professor Laleh Khalali, makes a very important point when she links the massive degradation of national life that has taken place under neoliberalism to the diminishing of social mobility and the growth in inequality. Issues of mobility need to be discussed in the round, for when social mobility and economic security are denied, the escape from unemployment cannot be discussed in terms of ‘free’ movement.

This is not pedantry. It’s to reinforce the point that if progressive people do not earth any discussion about freedom of movement in material conditions, they are in danger of looking like a middle-class, cut-off elite, with no direct connection to the thousands upon thousands of people across the globe excluded from the positive benefits afforded to those genuinely free to move between countries.

Freedom of movement, furthermore, is not exactly colour-blind. As the EU has made freedom of movement for its citizens one of its guiding principles, at the same time, all EU countries have discriminatory immigration laws, which not only discriminate in favour of EU citizens but are applied internally, hindering visa applications and family reunification rights, for instance, from non-white European citizens with families, including spouses, in North Africa, India, Pakistan, Turkey, China, the Caribbean etc.

If we are to fight, in this post-Brexit world, for anti-racist and socially just principles, maybe a better starting point than free movement would be a practical defence of migrant rights, particularly in terms of employment. But since an injustice against one is an injustice against all, this would need to be linked to a broader struggle against the neoliberal working conditions that destroy the life opportunities of all European workers, whether migrant or non-migrant. Disappointingly, only a few of the contributors address this. Laleh Khalali does, as does Andrew Burgin of Left Unity, who observes that eastern European seasonal farm workers in Lincolnshire and other agricultural areas are now at grave risk of the worst excesses of casualisation. He fears that ending free movement would mark a return to sector-based schemes for foreign migrants, reducing the rights of EU workers to ‘temporary stays with no rights for family members’.

Starting a discussion amongst activists about migrant rights would inevitably lead to a grounded discussion of freedom of movement divested of the distortions of neoliberalism and enhanced by principles of anti-racism and social justice. There are the seedlings of such a discussion in this book. But if a movement is to blossom, and, indeed, control the agenda post-Brexit, the debate has to gain greater depth and move away from abstraction. As Marina Prentoulis, another of the book’s more illuminating contributors, put it: Brexit has become a ‘tautological trope that shuts down discussion on concrete contents’.

Thank you for this review. This sounds like a book worth reading. ?

There would no such thing as EUROPE (social or otherwise) had it not been the brutal process of colonization; the BERLIN CONFERENCE of 1884-1885 created artificial boundaries in Africa to enrich the ‘peoples’ of EUROPE. And without the praxis of ‘DECOLONIZING THE MIND’ (NGUGI WA THIONG’O); TRUMP and MAY will pursue the agenda of re-inventing EMPIRE 2.0.
There is more to brexit saga than migrant labor in the ‘fields’ of
LITTLE ENGLAND.