Who facilitated the Christchurch terrorist’s journey through hate? 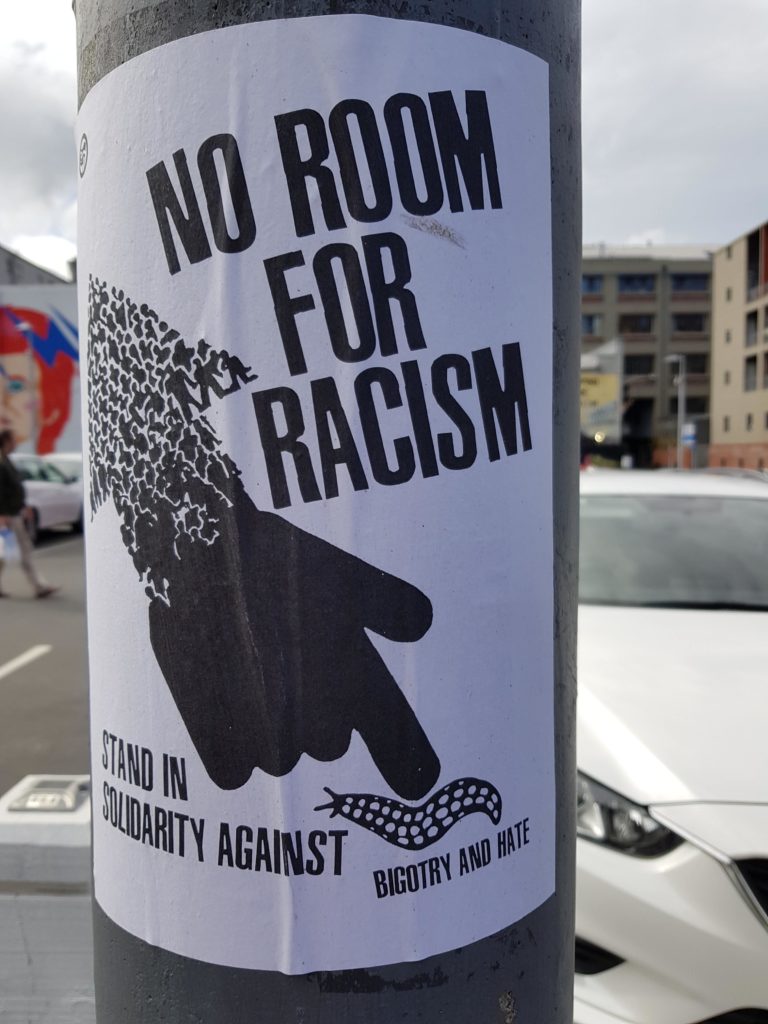 The context of war and the influence of the New Right intelligentsia cannot be left out of the reckoning when it comes to understanding the making of the New Zealand terrorist.

The massacre of fifty Muslim worshipers, and wounding of fifty more people, at the Al Noor mosque and Linwood Islamic Centre in Christchurch, New Zealand, streamed live on Facebook via the gunman’s body camera, has left Muslims scared and angry. Angry because they could see it coming, yet their fears were talked down. Scared because in today’s climate it seems virtually impossible to trust those in power to stop creating the conditions for even more Islamophobia.

Islamophobia is the breeding ground for racism and fascism in Europe today, and anti-Muslim racism has more than one face. It is institutional (enshrined, since September 11 and the war on terror, in a punitive criminal justice system that singles Muslims out for greater punishment and enhanced surveillance); it is electoral (witness the Conservative Party campaign against Sadiq Khan in the 2016 London mayoral election or more recently, in Italy, with the League electioneering on the slogan ‘Stop Invasion’ and the promise to close down mosques). Islamophobia is legally sanctioned by the state (many European countries have deprivation of citizenship laws targeting Muslims, also restricting the wearing of the burqa and the hijab); it is popular (note the British media’s obsessional referencing of ‘on-street grooming’  as a specific Muslim crime and  the fashionable Muslim-bashing in mainstream debates). And all this inevitably leads to attacks on Muslim places of worship and racist violence on the streets.

Muslims, then, are feeling vulnerable because though the massacre may have happened nearly 12,000 miles away, it felt very close. Exactly how close was made manifest in the UK in the immediate aftermath, in the number of attacks on Muslims, including the abuse of a taxi driver in Rochdale, attacks on Muslim worshippers in Whitechapel and Finsbury Park, and what police are describing as a Christchurch-inspired  ‘terrorism-related’ incident in Stanwell, Surrey, where a teenager was stabbed by a man dressed all in green (ie, camouflage gear) and wearing a balaclava, shouting, according to one witness, ‘kill all Muslims’ and ‘white supremacy rules’. (Read a full list of attacks here).

A soldier in a war against Muslims

The first thing to say of the perpetrator of the Christchurch massacre is that he considered himself a partisan in a war – a war against Muslims. He refers to himself, in the 74-page document he sent by email to thirty New Zealand politicians including prime minister Jacinda Ardern minutes before the massacre, as a ‘freedom fighter’, an ‘ethno soldier’ taking a stand against ‘ethnic and cultural genocide’. Dressed in military fatigues, the gunman listened on his car radio to a song idolising the genocidal war criminal Radovan Karadzic, as he pumped himself up, like a paramilitary mercenary, to carry out the murders. Inscribed on his ammunition were the names of other perpetrators of racist crimes, including Luca Traini (responsible for the drive-by shootings of African migrants in Macerta, Italy, in 2018), far-right prisoners (Spanish neo-Nazi and ex-soldier Josué Estébanez who killed a 16-year-old anti-fascist in 2007), individuals and places synonymous with white supremacist narratives about dangerous Muslims (Rotherham) and the names of historical Crusade figures of the Middle Ages who fought Muslim armies. 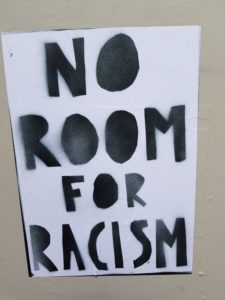 His obsession with war should have – but hasn’t – been cause for reflection about the recent cultural impact on Europe of eighteen years of wars in the Middle East. Since 2012, the IRR has been warning that the far Right is preparing for ‘race war’. In the 2012 publication Pedlars of Hate: the violent impact of the European far Right we warned that the far Right was utilising ‘enemy images’ of Muslims made respectable by the war on terror, imbibing the warmongering of counter-jihadi websites (such as Pamela Geller’s Atlas Watch and Robert Spencer’s Jihad Watch), and drawing on the ‘not dissimilar’ views of mainstream neoconservatives and culturally conservative writers.[1] We specifically warned of the dangers posed by Europe’s growing counter-jihadi movement and network of defence leagues that were depicting the wars in Afghanistan and Iraq as conflicts between a superior civilisation and a barbaric Muslim enemy, as well as the growth of far-right militia and vigilantism, particularly in Europe’s border areas.  According to a detailed analysis by the Centre for Analysis of the Radical Right, there ‘is no doubt that [the manifesto put out online before the killings] is essentially “counter-jihadist”. It is saturated with “counter-jihadist” and Islamophobic enemy images.’

Australian by nation – European by identity

The second thing to say about the alleged perpetrator is that he might be Australian by nationality, but by identity he is European – Scottish, Irish and English’ by ‘stock’, is his own self-description. Certainly his white supremacist fantasies come in European shades. Such was his attachment to the European ‘motherland’ that he travelled in 2016 and 2017 through France, Portugal and Spain, Bulgaria and Hungary, describing in his ‘manifesto’ the ‘fuming rage and suffocating despair’ he felt against the invaders, claiming that French people were ‘often in a minority themselves’.

But to use his term, manifesto, to describe his 74-page document is to flatter him. It would give respectability to the incoherent scribblings of an unadulterated white supremacist and arrested adolescent obsessed with ‘sub-replacement fertility’, civilisational decline, decay and death. Everything in the manifesto is redolent of the deluded narrative of white victimhood and white martyrdom that is everyday exchange in far-right chat rooms and online subculture. It conveys no thought-out ideas, only the self-pity of a 28-year-old man who compares himself to Nelson Mandela and expects, in his own delusional words, to one day win the Nobel Peace Prize. The Norwegian mass  murderer,   Anders Behring Breivik, who also described himself in military terms (his manifesto was signed AB Justiciar Knight Commander, cell 8 Knights Templar, Europe), said much the same in his manifesto, further claiming, at a pre-trial court appearance, that he should be honoured with a military medal for his actions. 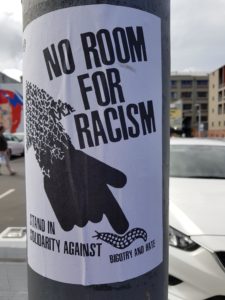 But in all the debate since Christchurch, one category of people has not been called to account as it should be. In the gunman’s journey through racism and hate he greedily gobbled up any pseudo-intellectual titbit thrown his way by a coterie of New Right writers and journalists who have stretched the limits of public debate and made racism respectable under cover of cultural critique. First, the title of his manifesto, The Great Replacement: Towards A New Society, is taken from the FN- and PEGIDA-sympathising French writer Renaud Camus, who in 2012, echoing the Eurabia theme of Bat Ye-or (‘Europe is being colonised by the Arab world and forced into an attitude of dhimmitude’), coined the term le grand remplacement to describe the colonisation of France by Muslim immigrants from North Africa and the Middle East. This process, through changing demographics, replaces an existing culture with a new one, and threatens to ‘mutate’ the country and its culture permanently. In the UK, there was outrage when the BBC invited a leading member of Generation Identity (a movement that originated in France) onto the ‘Newsnight ’ TV programme to discuss the causes of the Christchurch massacre. Generation Identity is a movement that has its roots in France, where New Right authors like Renaud Camus, Eric Zemmour, Jean Raspail and philospher Alain Finkielkraut have dominated the broadcast and print media for at least a decade. When challenged, the high-minded and apparently well-mannered Camus took to Twitter to deny accusations that he provided the intellectual inspiration for the killer, opining that this ‘criminal, idiotic, and awful’ attack was carried out by a perpetrator who is guilty of an ‘abusive use of a phrase that is not his and that he plainly does not understand’. Camus’ words, so elitist and insensitive, make it all the easier to understand Guardian columnist Nesrine Malik’s declaration that she’s ‘done with debating racism after Christchurch’. Malik’s point is that the fork-tongued ‘genre of response protocol’ that follows attacks on Muslims, which ‘blows dog whistles even as carnage is unfolding’, makes it ‘futile’.

A struggle against the culture that provides ammunition and space

In his 1,500-page manifesto, Breivik, now serving a 21-year prison sentence that can be extended indefinitely, made a number of references to New Zealand, in particular suggesting that it might be a place for Europeans to move to in order to avoid immigration. It’s worth recalling that after Breivik was arrested, the mainstream media sought to present him as a disturbed loner, denying that the mass murder of seventy-seven people, mostly children, could be racially or politically motivated. (Let’s not forget that the children he killed were attending a Norwegian Labour party youth summer camp.) Initial psychiatric assessors, who had no knowledge of the universe of ideas that Breivik was part of or the hyper-reality he had joined on the internet, assessed him as suffering from paranoia and delusional fantasies, failing to recognise the ideological roots of his violence and the intellectual currents that nurtured him. Thankfully that view was challenged and overturned.

Today we must stop the mainstream media similarly erasing the roots of the terrorist’s Islamophobia, recognising also that at a time when the extreme Right is represented in nearly every European parliament, the rhetoric of war has become normalised. The idea that European civilisation is threatened by Muslims and by immigration is part of mainstream European political thought. In the UK our struggle is not just against the far Right but the wider culture and politics that provide it with intellectual ammunition and space.

Liz Fekete is author of Europe’s Fault Lines: racism and the rise of the Right. Order a copy here.

That could be very kind of you to say. Sure, it does.

Liz
An excellent article. It is so important to challenge this lone perpetrator narrative. The article rightly spell out how wide spread Islamophobia or racism against Muslims is. You point out wide range of contributors in Europe that support the narrative of the Far Right. We live in perilous times where mainstream political parties are fuelling the flames or at best keeping their heads down – sadly including the Labour Party here. There are very useful links to follow up
Keep up the great work
See you soon