When the state is complicit in hate

Racist violence in Europe is sustained by cultures of impunity, as reports by Amnesty International, and Médecins du Monde and the Greek Council for Refugees make clear.

Two reports published last month document in harrowing detail the reality and impact of racist violence across Europe, as well as its intensification against a backdrop of economic turmoil and the growing influence of far-right movements. In the process they show how criminal justice systems, through a combination of mendacity and inertia, are frequently complicit in attacks ranging from sporadic assaults to those committed by organised far-right terror squads.

The reports, the National Report on Racist Violence by Médecins du Monde (MdM) and the Greek Council for Refugees (GCR), and We ask for justice by Amnesty International (AI), stem from concerns about racist attacks and the response to them by criminal justice agencies. The former draws on a one-year joint initiative by the report’s authors which attempted, among other things, to document racist violence in Greece and provide support for victims. The latter examines racist violence against Roma in three countries: the Czech Republic, France and Greece. Both reports contain interviews with victims of sustained violence, one of whom, a woman in Greece, likens it quite simply to ‘war’.

That she does so is unsurprising. As both the painstaking AI and MdM/GCR reports make clear, racist attacks are not isolated. 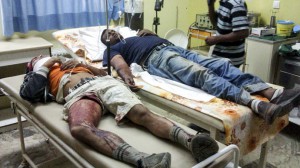 And the examples documented include attempts to burn down people’s homes whilst they are inside, and families having tear gas canisters thrown at them as they attempt to barricade themselves inside buildings. They include a 14-year-old boy from Afghanistan who was set upon, had a bottle smashed over his face and was beaten unconscious. They include the shooting of thirty-five Bangladeshi migrant workers last year in Greece by their foremen after they took part in a peaceful protest against the fact their meagre wages were being withheld.

The details differ. But the ubiquity and frequency of the violence across all of the countries examined is made explicit in both of these reports. In Paris, attacks against Roma continued ‘unabated’ in 2013: a man recounts how several people sleeping rough were, for example, attacked with acid as they slept. In the Czech Republic, meanwhile, a man working with Roma explains how he received death threats for doing so, at one point having stun grenades thrown at him by neo-Nazis. What these reports provide, in the first instance, is evidence of racist violence, the cataloguing of which has been made necessary by the official refusal to do so – either in any meaningful way or in some cases even at all – by criminal justice agencies, until they are forced.

Monitoring attacks, of course, should not be seen as an end in itself. But as these reports make clear, the fact that this is needed is linked to a broader institutional denial of the reality of sustained and ongoing violence. For it is this denial which means that those carrying out such attacks frequently do so with absolute impunity.

In part, this impunity is reflected in the paucity of mechanisms of legal redress. As MdM/GCR show, for example, in Greece, despite reforms to the law, the ‘collection and processing of data concerning the racial or ethnic origin and religious or philosophical beliefs’ is categorically prohibited. This, combined with legislation on aggravating circumstance ensures that it is difficult to follow the way in which the courts apply (or indeed, do not apply) racist motivation as an aggravating factor when sentencing. Moreover, given that ‘according to the prevailing view of the prosecutors’ the victim ‘has no right to refer to racist motives even during the pre-trial’, combined with a system where ‘aggravating circumstances’ (such as racial motivation) are only taken into consideration at the stage of sentencing, the application of the law around hate crime is hindered from the outset.

Yet, as the documented cases exemplify, the law itself cannot be seen as the sole factor through which impunity is sustained. Rather, it is the practical workings of criminal justice agencies – from the courts to the judiciary – which frequently legitimise cultures of hate, normalising and even encouraging acts of serious violence.

First, police forces often do not investigate attacks, sometimes using creative excuses to ignore or downplay violence, sometimes not even bothering to do that. When, for example, bricks were thrown at caravans inhabited by Roma families in Lille in December 2012, in the aftermath of a demonstration against their presence in the locality, the police were called to investigate. However, they arrived after an hour, when the attackers had left, claiming that they had been given the wrong address. A few months later, the attacks intensified. Molotov cocktails were thrown at the caravans and again, this was reported to the police, but after the incident was reported, the police were simply not heard from again. The story is one that is frequently repeated, and provides a reminder as to why, when police forces lament the failure of victims of crime to come forward, there are reasons for this.

But if this points to a refusal to acknowledge people’s victimisation, it can also quickly turn into a scenario where those victimised are blamed for the hostility they face. AI, when discussing repeated anti-Roma protests by far-right groups in the Czech Republic last year, makes explicit the impact of these terror tactics on those targeted: the fall-out in terms of racist abuse and violence, and the fear that was generated. Yet, after one of these marches, the police issued a statement saying that they saw their role as preserving order and protecting property, preventing fighting between the ‘two sides’, as if the presence of far-right hit squads was a result of provocation or some kind of running feud. The notion put forward by the criminal justice system was that a particular form of social order had to be upheld at all costs, and that this form of social order was being threatened by the presence of Roma. The sustained violence against them was understood, ultimately, as a by-product of their own existence.

It is in such ways that responses to hate can be undermined in their entirety, when the prevention of hate contradicts other state imperatives. And this is made explicit through MdM/GCR’s description of the response to attacks in Greece. One of their recommendations argues that victims of/witnesses to racist violence ought to be granted special protection status, and that pending deportations or removals should be suspended until the conclusion of criminal proceedings. That it does so points to concerns over the way victims of attacks or those who could testify against attackers are being deported before appearing in a trial.

Commenting on the MdM/GCR report, the President of the National Commission for Human Rights and Coordinator of the Racist Violence Recording Network, Kostis Papaioannou, states that ‘We cannot turn a blind eye to the long-term institutional tolerance of … racially motivated crime’. What could be added to this is that institutional tolerance to racially motivated crime can be seen as the flip-side of an institutional intolerance of those communities against which these crimes are targeted. When a mayor in a town in the Czech Republic, speaking to an 800-strong crowd who have attended a far-right rally against the Roma, says ‘if you think we have a different view on these issues … you are wrong’; when council members in the same town issue a document splitting Roma into categories of ‘cooperating’ and ‘unadaptable’; when the Minister of the Interior in France says (in 2013) that ‘Those people [Roma migrants] have lifestyles that are extremely different from ours, they should return to Romania or Bulgaria’; or when the police spray tear-gas in the face of a Roma man in Marseille, in one of the many forcible evictions that took place in 2013, it should be beyond doubt that those helping to generate hate and ultimately legitimise hate crimes are those agencies and individuals with the responsibility to prevent them. As far-right and populist right parties gain an electoral foothold across Europe, and as mainstream parties seek to outflank these parties with nativist policies and anti-immigration measures, these are lessons that need to be learned beyond the countries discussed in these two reports.

Read the National Report on Racist Violence by Médecins du Monde (MdM) and the Greek Council for Refugees (GCR), here

MY 5 YEARS DESPERATE CRY FOR HELP TO BASICALLY POSSIBILITY TO HUMANS LIFE!

Our desperate situation of our Czech / Danish family and our daughter Nicole begins to grow into a new life family human tragedy, where the total failure of human and children’s rights and human basal rights to a family life where racial discrimination, psychological and physical torture, the systematic destruction and disposed of human children’s rights and for fundamental possibility of family life, gathering right now to dimensions of destroyed families!
The tragedy of The Danish/Internationals family radios on the legal protection and assistance!
Dear European Ombudsman
Weighted European parliament
Dear European courts
IT’S TIME to take this basic Reports for the fundamental right to life very seriously, as threatening the future of the proper and peaceful European development.