When class becomes a commodity 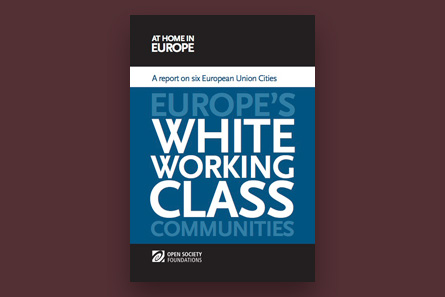 A new Open Society Foundations research project on Europe’s white working class provides a welcome corrective to those who champion the class as a victim of immigration while colluding in the abandonment of working-class areas.

In his classic text examining production processes Labor and Monopoly Capital, published in 1974, Harry Braverman showed how ‘poverty and insecurity have become more or less permanent features of everyday life…’[1] He was writing specifically about the US. But four decades on, the prescience of his work shines through a series of powerful reports, published by the Open Society Foundations, on white working-class communities in Europe. Focusing on marginalised white communities in Aarhus, Amsterdam, Berlin, Lyon, Manchester and Stockholm, the research attempts to document the experiences of sections of the population that are routinely derided as feckless ‘white trash’ and, in some countries, at least, regularly ridiculed through the production of voyeuristic media exposés of ‘problem families’. The specific contexts of each of these localities differ, sometimes markedly. The economic backdrop to deindustrialisation in Higher Blackley (Manchester), for example, is different from that of Marzahn-Hellersdorf (Berlin), formerly part of the German Democratic Republic and remoulded into one of the biggest housing projects in Europe. But one of the things that unites them is that they are areas that have been marginalised economically, politically and socially. And one of the things that connects the reports is the way they reveal how disingenuous dominant narratives of the white working class have become.

In the UK, these narratives have been built up over the last few years through a resurgence of ‘support’ for the white working class. Sometimes this has stemmed from those such as David Goodhart on the Centre-Left; other times from media columnists and New-Right intellectuals arguing that immigration has become diametrically opposed to the interests of working-class communities. These commentators start from differing political perspectives, but they almost all argue that immigration has destructive impacts which have been met for too long with only silence – a silence that must be broken. A common assertion of these champions of the working class is one that used to be confined to the fringes of the Right: that a liberal elite favours minorities at the expense of the ‘indigenous’. ‘Diversity’, for these thinkers, has always been held up as tyrannical, they claim, with those who wish to voice any concerns silenced, their cries killed off before they can even leave their mouths. What has increasingly gained ground, however, is the notion that multiculturalism – as fact and as ‘ideology’ – exists as one aspect of a form of cultural warfare that is being waged on the working poor.

‘Comfortable liberals in well-paid white-collar jobs’, wrote the academic Roger Scruton – long associated with the New Right – earlier this year, ‘can happily dismiss as “racist” those cris de coeur of ordinary working people whose jobs have been taken by low-paid immigrants, who find that the principal language spoken in their neighbourhood is no longer the only one they know, and whose children are being educated in classrooms where the majority are laboriously learning English.’ Leo McKinstry, author and self-styled apostate left wing Express journalist, last year described ‘mass immigration’ as ‘a gross betrayal of the British people, particularly the working class who have borne the brunt of this catastrophically misguided policy’. According to Vincent Cooper, regular contributor to the Commentator,[2] meanwhile, immigration policies in the UK (its welfare state apparently having been turned into a ‘world welfare state’) have resulted in ‘huge pressure on housing and services and the destruction of a homogeneous working class culture that eventually left the white working class marginalised and alienated, living in the shadow of mosque and temple, helplessly looking on as their high streets were covered in the Arabic and Devanagari scripts of Urdu and Hindi.’ Their claims, in common with those of many other commentators, have become political orthodoxy. And they are ironically shared – to greater or lesser degrees – by the political elites which these commentators say they despise. Labour politicians clamber over themselves to apologise for immigration and the policies which have allowed it to happen. The conveyor-belt production of anti-immigrant measures is Conservative electoral strategy.

As the Open Society’s work shows, however, this orthodoxy is reductive. Each of the six reports draws from focus groups conducted with white working-class residents. Interviews are carried out with local government officials and community workers. Local historical and political contexts are analysed. Insights are presented thematically in an over-arching analysis written by journalist Daniel Trilling, distilling the perspectives into sections on identity and belonging, education, employment, housing, health and social protections, security and policing, citizenship and participation, and the role of the media. The broad scope of the research is reflected in the methodology. And it is through this that the research seeks to show the experiences and perspectives ‘of a section of the population whose lives are often caricatured and whose voices and views are rarely heard in public debates and discussion on integration, cohesion and social inclusion.’

In all of the areas studied, there are real concerns – to greater or lesser degrees – amongst some residents about immigration. These cannot be ignored, and the reports’ authors are careful to give voice to them. In some, these concerns are expressed more vigorously than others. In some they find a vehicle in far-right groups. But in others, this hostility is resisted. Diversity is a source of pride for certain residents. Those who use focus groups to attack immigrants are challenged, in certain contexts. A portrayal of white working-class communities as those whose interests are set singularly against immigration, is shown to be simplistic. Whilst those who now claim to defend the white working class construct a narrative that elites have abandoned such communities in favour of immigrants, what these reports show, much more broadly, is the way in which these same elites have colluded in the abandonment of entire working-class areas, in the name of economic progress, and that these areas have become increasingly multicultural. In doing so, the research acts as a window into the destructive capacities of globalisation, with the corporate state as its vehicle, showing how working-class communities are being buffeted and pounded, with insecurity becoming a norm.

Class as a vehicle

In this context, as the research acknowledges, there are inherent difficulties in defining the term ‘white working class’, especially when the category ‘does not translate neatly into the public and political discourse in different European countries.’ There is an attempt to negotiate this by using a loose definition of ‘majority’ populations (a definition which the authors accept is problematic). But this only serves to make clearer the fact that the demographic make-up of working-class communities continues to undergo a process of radical change. The case studies in the reports show the way that working-class communities are becoming more diverse, and within this there are divisions and sub-divisions. But to discuss these changes in class composition solely through a prism of ‘whiteness’ airbrushes this reality out of existence, as well as the processes through which the class is marginalised. In doing so, real debates to be had about class, power, insecurity and anxiety are shifted onto a terrain of race. Those who claim to be newly championing the white working class are disingenuous. They are using the white working class as a vehicle to thrust home their critique of immigration. In essence, they are using ‘class’ as a commodity in the portfolio of neoliberal dogmas that now substitute for informed political analysis, and which serve mainly to obfuscate the possibility of any radical change.

For in the Open Society reports, residents speak of the fact that wages have fallen in real terms to such an extent that in-work benefits are required just to remain above the poverty line. They speak of how employment has become more and more geared towards temporary, insecure jobs. Some speak of a reluctance to buy a home, as employment is so insecure that mortgage repayments may not be met. Others know this would in any case never be possible in the first place. Some speak of their anger at the failure of police to respond to calls for help. Others speak of police violence and the lack of accountability. Informal social networks are frequently important, in part to mitigate against the ways in which formal aspects of state support are sometimes difficult to access. There is an awareness of the ways in which health can correlate with inequalities. There is anger at the persistent media representations of their communities as a source of ridicule.

‘[T]he accumulation of wealth which takes place at one pole of society in the capitalist system’, warned Harry Braverman, ‘is matched at the other pole by an accumulation of misery’.[3] What these reports show is that this is correct, but only to a point. More accurately, fear mixes with resentment mixes with warmth mixes with stoicism. What frequently emerges is a vision of communities proud of their localities coupled with a real mistrust of the political processes and institutions which have little interest in their concerns. Decades of market fundamentalism have social costs. And the indignation of those feeling the brunt of them is legitimate.

What is at stake, at a time when trade unions and labour movements are weak, is the direction in which these emotions will be expressed. As the journalist Gary Younge argues, the political classes are complicit in the globalising processes which have resulted in the destruction of old manufacturing bases, the erosion of welfare, the haemorrhaging of rights that workers have gained and the weakening of those institutions that were once able to defend them. But any broad-based solidarity that could emerge through resistance to these processes is sabotaged through the scapegoating of migrant communities as the cause. To do so is to define the powerless as the enemy, rather than the powerful.