Weaponising violence against women: from Ireland to Poland 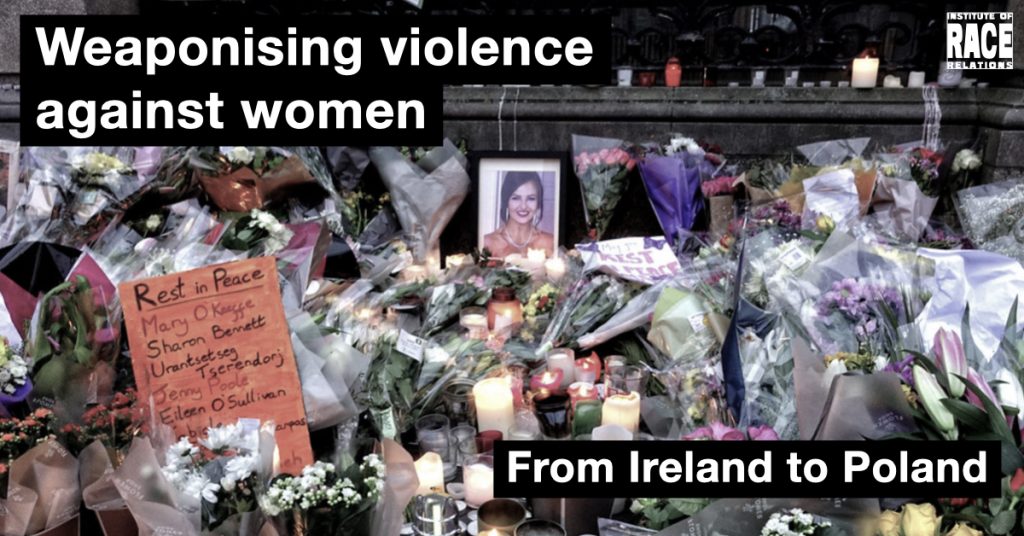 Sophia Siddiqui investigates how the murder of Ashling Murphy in Ireland was used by the far Right to push a racist and misogynistic agenda, and how this follows an all-too familiar pattern across Europe, now replicated at the Polish border, that grassroots groups are pushing back against.

On 12 January, 23-year-old primary school teacher Ashling Murphy was murdered whilst she was out for a run in Tullamore, Ireland. Whilst an outpouring of grief and rage erupted across the world, far-right groups immediately speculated on the nationality of the perpetrator, spreading false rumours online in order to manipulate her death for an anti-migrant cause, whilst claiming to be ‘protectors’ of Irish women. But which women are they claiming to protect? How do such narratives which equate strong borders with the defence of women circulate in different contexts, and what does this tell us about the nature of misogyny and far-right racism?

Searching for an immigrant suspect

As soon as news broke that the gardai arrested a Romanian suspect (who was later released), social media platforms were flooded with material linking Romanians to crimes and calling for the closure of Irish borders. A petition was set up calling for the deportation of the so-called ‘Romanian murderer’ and he and his family received death threats after photos were shared online. When the suspect was released with no charges, the focus immediately moved to the next target, a Syrian man living in direct provision in Tullamore, another false rumour. Jozef Puska, a 31-year-old Slovakian national has since been charged.

The way in which the murder of Ashling quickly morphed into an online frenzied hunt for an immigrant suspect disappeared the victim herself, turning her into a prop for a racist agenda whilst obstructing a criminal investigation, with the gardai calling for misinformation to stop being shared. The focus of far-right groups was not on the murder of Ashling, but solely on the nationality and immigration status of the perpetrator – revealing that they only care about her death if it can be manipulated for an anti-immigrant cause.

Closing borders ‘in defence’ of women

Rather than understanding gender-based violence as a global, systemic issue affecting all communities, it has been weaponised by the far Right to call for more immigration controls. In the weeks following the murder of Ashling, the far-right Irish Freedom Party, whose leader Hermann Kelly has said that those talking about the ‘great replacement theory have a point’, used the tragedy as a justification to push an anti-immigrant agenda, arguing that open borders means ‘the free movement of criminals into your locality’.

The far-right National Party in Ireland shared similar rhetoric on Twitter that ‘women are not safe in multicultural Ireland’ and circulated a flyer calling for Irish men to ‘man up, make Ireland safe for women and children’. These appeals to masculinity assert that it is a man’s duty to protect women against the threat of ‘multicultural Ireland’ – an attack on women is an attack on their masculinity. ‘We the men of Ireland pledge to fight for your honour and the safety of all of Ireland’s women and children’ stated a member of the National Party after laying a wreath at Ashling’s grave in a video posted on social media – in a cynical attempt to present the group as ‘defenders’ of women and children.

An all-too familiar pattern across Europe

The linking of migrants and refugees to gender-based violence follows an all too familiar pattern. Following the rape of a 14-year-old girl in Co Wexford in 2019 (for which two Irish teenagers were jailed for this year) far-right accounts spread false rumours that the assailant was an asylum seeker from the Middle East or Africa. In 2018, the killing of 28-year-old Sophia Lösche in southern Germany by a Moroccan truckdriver was weaponised by the far Right to call for an end of immigration to Germany, with her photo carried during a right-wing demonstration claiming to mourn ‘the victims of Germany’s forced multiculturalism’, much to her family’s anger.

More recently the circulation of false information associating refugees with crime has become pervasive in Poland, as refugees from war-torn Ukraine arrive in the south eastern border city of Przemyśl, with research showing that incidents of misinformation have grown by 20,000 per cent. Fake reports – including rape, false rumours that a man of Middle Eastern origin attacked a woman with a knife and stories of a pregnant woman being attacked on a train[1] – have been circulated on social media by Polish nationalist groups, football hooligan groups and members of the far-right Confederation Liberty and Independence party. Such narratives have fuelled the creation of a ‘citizens’ police’ who have attacked groups of mainly students from African, south Asia and the Middle East, with football hooligan groups claiming to ‘cleanse’ the city of undocumented people in order to ‘defend our women’.[2]

But which women do they claim to defend? Their protection certainly doesn’t extend to a female student from Sudan who was attacked by football hooligans in Przemyśl. For far-right groups, gender-based violence is only of importance if it fits their narrative of migrant men attacking white women – obscuring the way that gender-based violence works on an interpersonal and state level whilst erasing black and minority ethnic victims as it suits.

For far-right groups in Ireland, anyone who sits outside of the imaginary of the archetypal white straight Irish woman is seen as a threat to the nation. At an anti-mask protest in 2020 a National Party member assaulted an LGBTQ activist with a wooden plank wrapped in the Irish flag whilst chanting ‘paedo scum’ at her. And as feminists point out, when the victim is non-white, for instance Urantsetseg Tserendorj, a 48-year-old migrant cleaner who was stabbed on a street in Dublin in January 2021 and died in hospital two weeks later, ‘nobody was talking about nationality then’.

Today we remember Urantsetseg Tserendorj on the one year anniversary of the brutal attack inflicted on her as she was walking home from work. She became a victim of #femicide two weeks later when she died as a result of her injuries.

Feminism itself is also seen as a threat, as it supposedly victimises white men. Women’s charities were accused of pushing a narrative that all men were to blame for Ashling’s murder, and after minister for justice Helen McEntree spoke out about her experiences of feeling unsafe in public, a member of nationalist fringe group Siol na hÉireann encouraged her to walk down the street in Africa or the Middle East and ‘see how long you last. They’ll have you raped, murdered and your head cut off within half an hour’.

Responses on the ground

We can clearly see how, by so overtly combining misogyny with anti-immigrant and ethno-nationalist sentiment, these aspects of the far Right reinforce each other. Anti-feminism is not merely a gateway to far-right thought – fused with racism, it is an integral part of far-right ideology.

Feminists in Ireland know that this demands an intersectional solidarity in response. Speaking at one of the protests organised in memory of Ashling, Laura Fitzgerald, a representative of the socialist feminist group ROSA highlighted how: ‘the movement that we must build has no room for racism and no room for transphobia…racism and transphobia are inextricable from sexism, they’re all at the root of the problem and we stand against all of them together and united’.

ROSA, established in 2013 following the death of Savita Halappanavar, a migrant woman who died after being refused an emergency abortion at a Galway hospital, campaigns on many issues including ending violence against women, racism, austerity, trans rights and refugee solidarity. Speaking at a rally for Ashling in Dublin, Laura Fitzgerald drew on the death of Savita which sparked a movement to repeal the 8th amendment (the constitutional abortion ban in Ireland which was repealed in 2018) and the need to make a collective promise to Ashling – never again.

As anti-racist feminists in Ireland know too well, the fight for reproductive justice, the safety of all women and gender non-conforming people and the rights of migrants and refugees are interlinked. And for groups working on the ground with migrants and refugees in Ireland – such as MASI, a group of asylum seekers campaigning to end direct provision; Akidwa, a network which supports migrant women; and MERJ, a group of migrant and ethnic minorities fighting for reproductive justice for all – or in Poland, where volunteers and NGOs are the backbone of relief efforts in the absence of state support, false information about crimes committed by migrants and refugees creates a tense environment. We cannot allow the far Right any room to claim they are ‘protectors’ of women whilst pushing a racist and misogynistic agenda.

Cover image: a vigil for Ashling Murphy by Harry Warren via Flickr

[1] The police in Poland have denied claims that crime has increased since the outbreak of war in Ukraine and warned against the dangers of disinformation. Following claims that an ‘Arab looking man’ attacked a pregnant woman on a train from Przemyśl to Warsaw, the Polish railway company PKP Intercity stated that the company had not registered such an incident.

[2] According to DFRlab, ‘Some football groups in Poland are connected to far-right organisations, and have a history of committing violent acts under the pretext of defending the homeland and conservative values’. In the UK, we have also seen the mobilisation of football hooligan groups in October 2018, when the Democratic Football Lads Alliance (DFLA) marched in London under the banner ‘Justice for Women and Children’ with placards protesting ‘rape gangs and groomers’.

[3] The Irish Men’s Rosary denies disrupting the protest for Ashling.