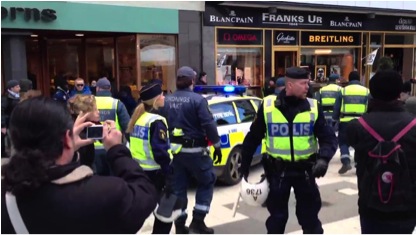 A member of the Swedish anti-racist magazine MANA reflects on the challenges posed by Operation REVA.

Asylum and migrants’ rights activists had been warning about the dangers posed by Operation REVA, the police operation to pursue, detain and deport undocumented migrants, ever since a pilot study was commissioned by the Swedish government in 2010. But it was only when REVA, which was piloted in Malmö, was rolled out nationwide and came to the streets of Stockholm, that opposition became widespread, with thousands of people marching against racial profiling in Malmö, Stockholm, Gothenburg, Norrköping and Uppsala. Now the anger over racial profiling seems to have opened up a long-awaited and much needed debate on the parameters of Swedish racism. But how far will it go?

The roots of Operation REVA lie back in 2008 when the government decided to review policies on the ‘location, imprisonment and deportation of undocumented migrants’. Prior to that, this had been the sole responsibility of the Swedish Migration Board, but its powers were soon to be split up between three public authorities: the Migration Board, the National Police Board and the Correctional System (ie prisons). An annual work programme issued in 2009 laid the formal basis for future cooperation which would be formulated around two principles: a more effective approach to deportation, and increasing the execution of deportation orders and the number of removals. A steering committee comprised of officials from the three agencies was formed, different consultant agencies were procured, giving birth, eventually, to REVA – Rule of Law and Effective Enforcement Work (Rättsäkert och Effektivt Verkställighetsarbete).

A large part of the funding for REVA came from the EU. The European Refugee Fund had earmarked  €676 million for all EU countries (saving Denmark) to strengthen the deportation machinery between 2008-2011. But no other country received more financial support from the EU than Sweden. Sweden received over €60 million for the period 2008-2011 while the UK, the country receiving the second highest support, received just under €41 million.[1] REVA was designed to take place in three stages: a pilot study (April 2010 to March 2011); a pilot in Malmö (2011); rolling out nationwide (from 2012 to mid 2014).When the border police rolled out REVA in Malmö, there was local opposition, but it was never commented on nationally. Local asylum activists were soon pointing out that the increased police presence which heralded the advent of REVA was fast becoming the norm. Cyclists whose appearance apparently marked them out to the border police as being from a migrant background complained that the police were stopping them and asking for ID, on the pretext of checking to see whether they had bicycle lights, or asking for proof of ownership. White Swedes, who were actually cycling without lights, would pass through the controls unchecked.

The mechanisms through which Operation REVA were implemented varied from city to city. In Malmö the border police seemed to have mainly relied on workplace and traffic controls, and immigration raids seemingly based on tip-offs from the public. In Stockholm, and more recently in Gothenburg, the border police have mainly stopped metro and tram passengers. On the pretext of checking their tickets, they have then carried out identity checks. More and more accounts of racial profiling began to be exchanged on social media. But one case resulted in more publicity. At the end of February, Swedish born Gonzalo Montes de Oca was questioned by the police as he waited for a friend at the entrance of the Central Station in Stockholm.  The police officer spoke to him in English and said he suspected that he was living in Sweden illegally. As soon as Gonzalo presented his ID-card the police officer  apologised (this time in Swedish) and let him go. It was this incident – and Gonzalo’s outrage over it – that triggered off more news interest and from here on the debate was to take a new turn. Another important development came when the  author Jonas Hassen Khemiri published an open letter in the Dagens Nyheter challenging Justice Minister Beatrice Ask to ‘change skin’ with him. The article was widely shared on social media, prompting many to share their experiences of being victimised by what Khemiri had explicitly named Sweden’s ‘structural racism’.

So why did REVA only become a national concern when it hit Stockholm? And how effective has the campaigning been?

On the one hand the answer is simple. Once REVA was rolled out in the capital, more and more Swedish citizens were affected, and this is what made the story newsworthy. Paraphrasing one of the main news agencies:  nine out of the ten people who were stopped in the metro checks were innocent. But if nine out of ten were innocent, just what was the actual crime of the remaining ten per cent?  To be without papers is not a criminal offence and the debate, so far, has tended to reinforce misconceptions about the rightlessness of the undocumented – as well as those who assist them.

But on the other hand, the opposition to REVA has opened the door for the consideration of more complex questions. Up until recently it has been very hard to introduce anti-racist perspectives into public debate. People and movements attempting to critique the use of racist stereotypes, caricatures and language, for instance, have either been described as oversensitive or patronised in a myriad of other ways.  In addition, there is great sensitivity in Swedish society over the use of the word ‘racism’. Swedes tend to have a self-image of themselves as the most non-racist, tolerant and equality-conscious people in the world. Another aspect of this sensitivity is the attitude to the word ‘race’ which is rarely used in Swedish and provides a further explanation of why Swedes disassociate themselves from the word ‘racism’. It is precisely because of such deeply-ingrained attitudes that any discussion of popular or structural racism meets with opposition. Since 2005, there have been repeated attempts by anti-racists to challenge the truth of the Swedish self-image and enter into debates about cultural representation and unconscious racism in everyday life:

Opposition to REVA has to be placed not just in the context of the growth in far-right movements, restrictive migration policies and popular and structural racism in Swedish society, but also in the development of new urban movements that have entered the public scene in recent years. They focus on issues of civil rights and the need to fight welfare cuts. Many of these movements have also raised criticisms about REVA, as they too, parents and young people alike, are affected by racial profiling when it hits their neighborhoods. Many Swedes from the ‘second generation’ (whose parents migrated to Sweden in the 1970s, ‘80s and ‘90s) are now entering university and the labour market and making their voices heard.

The police, in response to opposition and questions in parliament, have said that border control officers will no longer run ID checks on commuters on the underground. But this seems to be more a public relations exercise, as the controls are continuing, only with less intensity. Difficult, and exhausting though it might seem at times, campaigning needs to continue – against racial profiling, the pursuit of undocumented migrants and institutional racism in general. All efforts, even small ones, can make a significant contribution. Like many others countries, Sweden is in urgent need of more everyday resistance to racism. But the focus should shift from concentrating solely on the far Right and racist parties to take in the bigger story, one that challenges the status quo. We need to talk about racism – period. The biggest obstacle to change is the Swedish self-image – and only when this is successfully challenged will a significant shift take place.

[1] A table of the EU's funding budget is available to download here.

Thanks to the author for highlighting this issue in Sweden. A few weeks ago, the New York Times also ran a powerful piece by Jonas Hassen Khemiri, a Swedish novelist, on his experiences, (Sweden’s closet Racists):http://www.nytimes.com/2013/04/21/opinion/sunday/swedens-closet-racists.html?pagewanted=all&_r=0

Police ethnic profiling is a Europe-wide problem. If you want to find out more about efforts to change this, please visit: http://www.opensocietyfoundations.org/projects/ethnic-profiling-europe

With news of major disturbances in Stockholm (in part a response to the shooting dead by the police of an elderly man), it seems that discontent with policing now goes beyond racial profiling. A youth organisation called Megafonen says that during the ‘riots’ the police charged teenagers with batons and called them ‘monkey’s ‘rats’ and ‘n******’. They are worried about the over-policing of minority-ethnic areas and feel that the police are steadily becoming more aggressive and more prone to violence in their work.
This is not the first time the Swedish police have been accused of racism. IRR News previously reported In February 2009 that a video of clashes between police and youth in Rosengård showed several police officers shouting racist and abusive language at young people. Soon after, an investigation by a national newspaper exposed high levels of racism within the Swedish National Police Academy. See https://irr.org.uk/news/malmo-and-the-fault-lines-of-swedish-racism/