‘We are human beings, we should not be locked up like animals’ 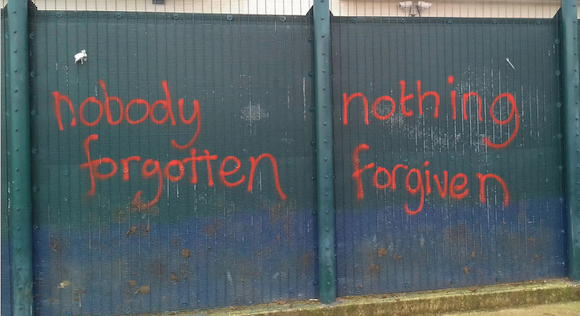 The IRR’s Sophia Siddiqui reports on a recent demonstration at Yarl’s Wood.

The demonstrations outside Yarl’s Wood immigration removal centre are a palpable and direct act of solidarity. Standing facing the detention centre, separated by a prison-like metal fence, barbed wire and security cameras, you can see, wave, and interact with the women inside who look out of their windows. You can hear their voices and read their signs: ‘we need freedom’, ‘5 months in, no end in sight’, ‘release us’.

Last weekend, approximately 500 people flocked to Yarl’s Wood for the twelfth demonstration at the privately run, but publicly funded detention centre in Bedfordshire. Protesters kicked at the walls of the centre, demanding its closure and the release of predominantly female detainees of the 400-capacity facility, whilst those inside stood by the windows and chanted alongside the protesters.

Yarl’s Wood is one of the UK’s eleven immigration removal centres. It has faced intense scrutiny since being set up in 2001. There have been undercover investigations, inspectorate reports, reviews and inquiries that have detailed human rights abuses in UK detention centres.

A highly critical 2015 inspection found instances of physically and sexually abusive behaviour by staff. The latest assessment carried out by HM Inspectorate of Prisons highlights concerns that vulnerable victims of torture, rape and sexual violence are still being routinely locked up. At the time of inspection, one person had been held in detention for more than three years.

Asylum seekers have committed no crime other than to seek asylum. Yet, they are locked up indefinitely for long periods of time, whilst their claims are decided or to await removal following refusal of a claim. The latest inspectorate report found that 70 per cent of women held at Yarl’s Wood are later released into the community, raising questions about the justification for detention in the first place.

The delays and uncertainty in the outcomes of casework have a severe impact on the mental health of the people detained. According to a report by the charity Women for Refugee Women, a third of detainees have mental health problems. Forty-one per cent of detainees surveyed said they had been tortured in the past, 72 per cent said they had been raped. A third of women in Yarl’s Wood had been put on suicide watch. Figures collected by No Deportations show there were 33 incidents of self-harm requiring medical treatment in 2016 alone.

One woman who spoke to the crowd was released from Yarl’s Wood the day before the protest. She had fled persecution from Bangladesh with her family, and was detained for six weeks. ‘We are human beings, we should not be locked up like animals,’ she said. She spoke about the lasting psychological impact of being detained.

A man who fled persecution from Nigeria due to his sexuality spoke about his experience of being moved to four different detention centres in the UK. One woman who was recently released from Yarl’s Wood reached out to her sisters who remained inside, calling for them to resist and be strong.

Protesters took phone calls from inside Yarl’s Wood, so that the voices of those detained could be played out of the loud speaker; their frustration, desperation and resilience came through as they chanted alongside the protesters.

One woman called in and pleaded for legal help for her immigration case. ‘Be strong, be resilient’, was the response given from the protester on the phone. It highlighted that beyond standing in solidarity at a protest, there is a desperate need for practical and emotional support for those detained, such as access to legal advice.

The protest began at midday, and ended at 5pm when the crowds of people went back to their coaches to return home. However, for asylum seekers, their struggle continues inside and outside the walls of detention centres, and so should ours, beyond the limits of a protest. There is an urgent need for an asylum system that is not dehumanising and punitive, but fair and humane.