Vindication for German anti-racists in campaign against ‘spying charter’ 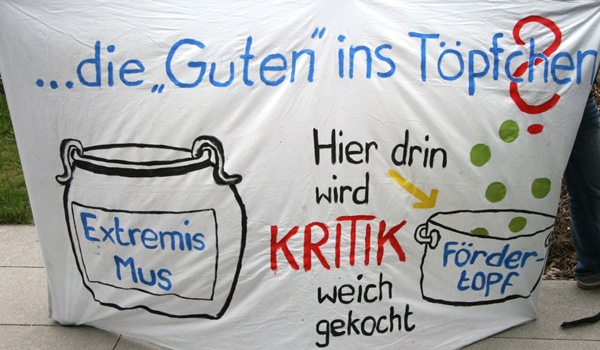 Last year, IRR News reported that the German federal government had introduced a clause into its grant conditions for federally-funded victim support groups fighting far-right extremism which obliges them to swear allegiance to the German constitution and accept the same definition of extremism as the government’s domestic intelligence agency. The ‘Affirming democracy against extremism’ (Demokratieerklärung gegen Extremismus) held them responsible for the acts of all institutions and individuals they worked with (referred to as the duty of all funded groups to monitor its project partners’ loyalty to the German Constitution). Now, following opposition and a spirited campaign by a number of victim support groups, the Administrative Court in Dresden has made significant criticisms of the anti-extremism clause, deeming it, in part, unlawful.

Last year, the Alternative Centre for Culture and Education in Saxony (AKuBIZ) Alternatives Kultur- und Bildungszentrum Sächsische Schweiz e.v.), brought an action against the government after a whole range of civil society and victim support organisations had raised concerns that the clause generated suspicion that groups combating extremism are somehow opposed to democratic values. AKuBiZ ‘s principled stand made national headlines when it refused to accept the Saxony Democracy Award, which it was awarded for its work countering the rise of neo-Nazism in Saxony. AKuBIZ said that it was not possible for it to accept such an honour because to do so would send a signal to the public that it agreed to abide by the ‘allegiance clause’ which undermined the internal democracy and open spirit of AKuBiZ.

On 25 April, the Administrative Court in Dresden ruled that the wording of paragraph 2 and 3 of the clause, which would be administered by the ministry of family, seniors, women and youth, was too vague. The judges considered it unlawful for the ministry to ask federally-funded organisations to check on all its partners. It also argued that the ministry exceeded its powers when it sought to punish a funded- organisation for a project-partner’s ‘disloyalty’.

Even though the judgment is not legally binding yet, it represents a partial success for civil society organisations as well as a major setback for the ministry of family, seniors, women and youth. AKuBiZ spokesperson Steffen Richter said that while he appreciated the court’s decision it was to be regretted that AKuBiZ had been forced to bring this action. ‘The extremism clause represents a very real barrier to important work against right-wing extremism and racism. The court has confirmed that those working for for democracy should not be confronted with mistrust’ he said. Bianca Klose, secretary of the German Association for a Democratic Culture in Berlin (Verein für Demokratische Kultur in Berlin e.v) VDK, commented that ‘This sentence confirms that the criminalisation of socio-political commitment and the work of civil society organisations by the minister for Family Affairs Kristina Schröder is against the German Constitution. It is high time to get rid of the clause altogether.’