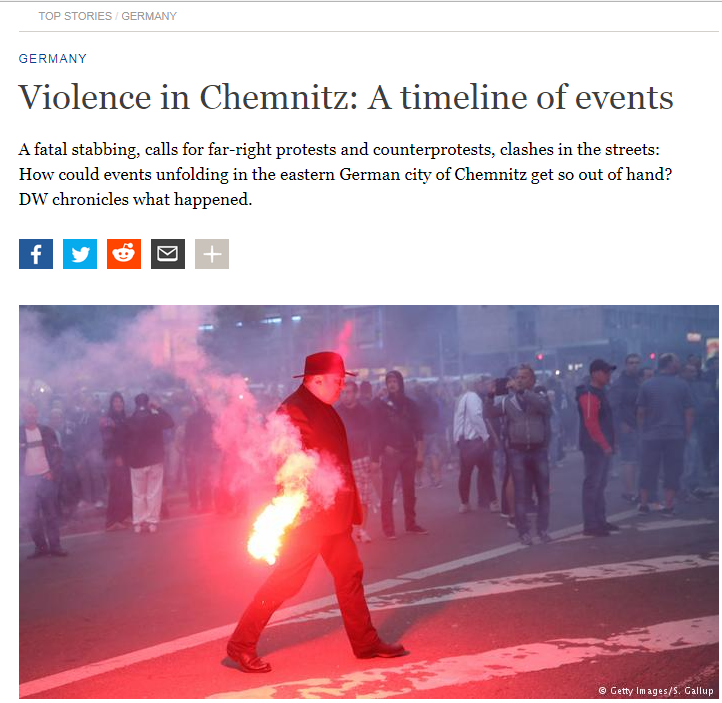 German anti-fascists are asking for support and international protest around events in Chemnitz.

On 27/28 August, in scenes reminiscent of the 1991 pogroms in Rostock and Hoyerswerda, police in the east German state of Saxony all but lost control of the streets to the far Right in the former industrial city of Chemnitz, once a Communist stronghold. Far-right protests against immigrants and crime quickly turned into anti-foreigner riots, with many describing the current situation in Chemnitz, where the electoral far-right party Alternative for Germany (AfD) is strong, as a pre-pogrom situation. As concerns mount that sections of Saxony’s police force are colluding with the far Right, Germany’s well-organised anti-fascist committees are mobilising. They are asking politicians, NGOs, anti-fascist committees and all concerned individuals in the UK to closely follow events in Chemnitz and, if possible, write to top state officials and the police in Saxony, as well as the federal interior minister, demanding action. As Ulli Jentsch, from the Anti-Fascist Press Archive (Apabiz) in Berlin, told IRR News: ‘Many thousands of anti-fascists and democrats have stood up against the Nazis in Chemnitz. They are in real danger in the days, and weeks to come, as the police, even if they wanted to, are unable to protect everyone. Every report from abroad is helpful.’

An English-language timeline of the violence in Chemnitz, can be found on the website of the newspaper Deutsche Welle and an even more complete version of events will be published on the websites of Apabiz and NSU Watch in the days to come. To summarise, the far Right started to mobilise after a fight at a local town festival on 23 August left a Cuban-German man, named only as Daniel H.,  dead from knife wounds and several others injured, with an arrest warrant issued for two men – one Syrian, one Iraqi. The first far-right mobilisation came after an online call from neo-nazis and  a local far-Right football hooligan association, Kaotic. Taking advantage of the tragic events during the street fight, they claimed that a German man

had been stabbed to death because he was protecting women and that a second man had been killed. Let’s show the people ‘who is in the driver’s seat in the city’ they  boasted  on social media. The next day, 25 August,  the far-right anti-Muslim organisation Pro Chemnitz organised an official demonstration, with an estimated 8,000  far-right supporters met by 1,500 counter-protesters. During this demonstration, far-right groups broke into smaller mobs, with many masked men hunting down foreigners, with some shouting ‘For every dead German, a dead foreigner’ and making the Hitler salute. Security experts say there is evidence that the rioters had been mobilised from different groups around the country and probably elsewhere in Europe.

Initially, the police responded to allegations that they were unprepared for dealing with the violence because of cuts in police staff numbers, by stressing that although only 591 police officers were mobilised they had responded magnificently in the face of far-right violence and leftwing counter-protests. But their claims were quickly rebuked by Saxony’s Office for Protection of the Constitution which said that they had warned the police in advance that large numbers of extremists from across Germany, as well as football hooligans and martial arts fanatics with a known far right background, were expected in the city in the ‘low to medium four-figure realm’.

Then, on 29 August, the scandal involving police inaction escalated. The authorities announced that a judicial investigation for official secrets violations had been opened because the arrest warrant for the Iraqi man wanted in connection with Daniel H.’s murder had been leaked to the far Right  and tweeted by Lutz Bachmann, the founding member of Pegida. The photograph quickly circulated online via a WhatsApp group of the far-right movement Pro Chemnitz, which originally called the demonstration.

The neo-Nazi National Democratic Party of Germany (NPD) has always had a base in Saxony and it was in another Saxon city, Zwickau, close to the Czech border, that the terrorist cell, responsible for ten murders, the National Socialist Underground first went underground in the 1990s. The far-right movement Pegida began in Dresden, the capital of Saxony, and it was in Dresden, too, that the Egyptian pharmacist Marwa El Sherbini, who was three months pregnant, was murdered in 2009 by a neo-Nazi in a courtroom. 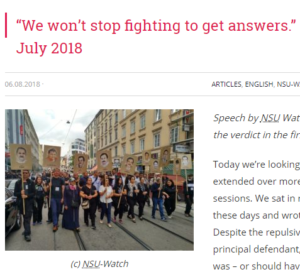 Police officers in Saxony are largely drawn from a region of the former GDR that, until recently, was largely white and monocultural and there has long been concern that sections of the police have been colluding with fascists. After the NSU case, in 2017, more allegations of police collusion emerged during the trial of ‘The Freital Group’, an anti-migrant vigilante and terror group linked to a number of attacks on refugee accommodation, leftwing centres and politicians. Amid disquiet about soft-peddling from the local prosecutor’s office and allegations that the Saxony police not only knew about the group but failed to intervene, it emerged that at least one police officer tipped off its members about police operations. A federal prosecutor was called in to take over the investigation .

While institutional racism in the police has never been formally acknowledged in Germany, the signs are that Chancellor Merkel, who has indicated that she wants more involvement of the federal police in Saxony, recognises that Saxony’s police force is in urgent need of reform. But when will she take action, and what will happen in the meantime? Pegida have called yet another demonstration for the first weekend of September.  Ulli Jentsch implores us to ‘Ask questions of the police, ask questions of the government of Saxony. Ask them what they will do to stop this racist outrage and protect foreigners and refugees in this country.’

Please register your protests to the  following:

Roland Wöller, Minister of the Interior for the State of Saxony

Government spokesperson for the State of Saxony

Read another article from Apabiz  here.