UK deaths in custody families travel to the US

Last week families of those who have died in police custody  in the UK travelled to America for a week-long tour to meet families of those killed by the police in the US  to start a ‘global conversation on deaths in custody’.

The families of Leon Patterson, Sean Rigg, Mark Duggan, and Kingsley Burrell, along with campaigners from Defend the Right to Protest and NUS Black Students, have travelled to California on the ‘UK-US Justice Tour’. The tour will start with a meeting with the family of Oscar Grant, who was shot in the back by police whilst handcuffed face down after being detained while travelling home early on New Year’s Day in 2009.

Families speak before the tour 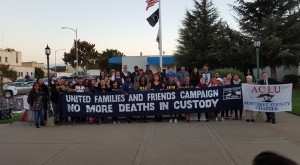 Stephanie Lightfoot-Bennett, sister of Leon Patterson: ‘United Families and Friends was set up to fight for justice, change and accountability. Of 4,800 deaths in custody since 1968, no state official has ever been convicted. From the UK to the US we are joining together to ensure that families’ voices will be heard.’

Marcia Rigg, sister of Sean Rigg: ‘Deaths and violence in state custody is a public outcry both in the US and in the UK. As Dr Martin Luther King Jr said, “Injustice anywhere is a threat to justice everywhere.” It is therefore vital for families like mine to join in solidarity with others, to share experiences and discuss strategies that can bring about change on both sides of the Atlantic.’

Sean Hall, brother of Mark Duggan: ‘On the 4th August 2011 in Ferry Lane Estate Tottenham, my brother Mark Duggan was horrifically shot dead by the police, they later set out to smear and explain their actions by claiming with no proof whatsoever that Mark was indeed one of the most dangerous gangsters in Europe! We move forward determined to find justice and aim to let the authorities know that there will be no peace without justice. We aim to share our experiences as well as learn the experience of others both sides of the Atlantic.’

Kedisha Brown-Burrell, sister of Kingsley Burrell: ‘I am travelling to the US to join the justice tour against police brutality to start to build an international alliance to address this horrific issue. My brother Kingsley Burrell died at the hands of the police after calling for their help. The alarming use of lethal and indiscriminate force by police dealing with black ethnic minorities is something that seems to be emulated by state officials here in the UK as well as the US and I want to unite with others to stop this injustice.’

The tour has been organised by the Ella Baker Centre and American Civil Liberties Union and follows on from the Ferguson Solidarity tour earlier this year. And then on 31 October #BlackLivesMatter co-founder, Patrisse Cullors, will join the United Families and Friends Campaign’s annual memorial procession in central London.

Defend the Right to Protest