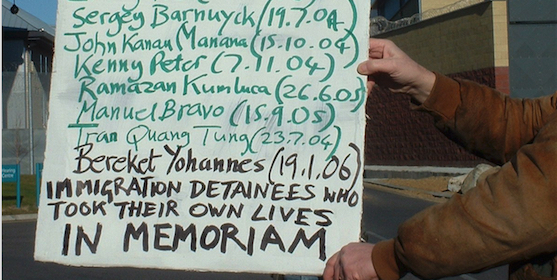 On 7 September, an unnamed Polish man died in hospital after self-harming at Harmondsworth detention centre. Twelve days later a Chinese man was found dead at Dungavel in Scotland. Two deaths in twelve days making a total of four deaths already this year.

The first man was found at the Mitie-run[1] centre in west London with self-inflicted injuries on 3 September and died four days later. A Home Office spokesperson said: ‘We can confirm that a 28-year-old man recently released from Harmondsworth Immigration Removal Centre died in hospital after life support was withdrawn on Thursday September 7. Our thoughts are with his family at this very sad time. A full independent investigation will be conducted by the Prisons and Probation Ombudsman.’

The man’s self-harm attempt came the day before a damning Panorama programme based on undercover filming at the G4S operated Brook House near Gatwick airport was due to be screened on television. The programme revealed racial abuse, neglect, excessive use of force and an apparent indifference of G4S staff to the plight of those in their care – many with mental health problems. Ten staff have since been suspended: a female nurse; six detention custody officers; two managers and an ex-G4S officer now working in the Home Office. And another five G4S staff have been placed on restricted duties

Just twelve days later, on 19 September, the CommonSpace reported that a Chinese man had been found dead at the Dungavel detention centre which is currently run by the GEO Group UK Ltd (but has in the past been operated by G4S and Premier Detention Services Ltd). And the Home Office issued  another bland press statement.

In total, since 1989, thirty-one people have died in immigration detention centres. There have been four deaths in immigration detention this year; the first, on 11 January, when Polish man, Lukasz Debowski, 27, died at Morton Hall – on the day his son was born. At the time, the Glasgow Unity Centre reported that he had been refused bail in 2016, as there was no surety available and and his heavily pregnant girlfriend was unable to attend the hearing. 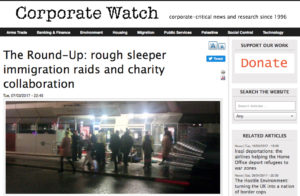 That two Polish men died in such circumstances this year is significant. In the pre-Brexit climate, increased numbers of EEA nationals are being detained as even charities for the homeless assist the Home Office. Important research by Corporate Watch found that: ‘Outreach teams from charities St Mungo’s, Thames Reach, and Change, Grow, Live (CGL) conduct regular joint “visits” with Immigration Enforcement officers, as often as fortnightly in central boroughs. Freedom of Information (FOI) responses show 141 such patrols organised by the GLA and 12 London boroughs last year. This figure does not include Westminster, the biggest concentration of London homelessness, where patrols are likely to be even more frequent.’

The other death in immigration detention was on 9 April: 43-year-old Branko Zdravkovic, was found hanged at the Verne in Portland, Dorset, a detention centre run by the Prison Service. According to the local Daily Echo, Zdravkovic was meant to be on ‘enhanced observation’ as he was at risk of self-harm.

[1] The centre is currently run by Mitie but has been operated by numerous private companies including:  Burns International, UKDS (UK Detention Service), Kalyx (previously UKDS) and GEO Group UK Ltd.