Transnational capital and the technology of domination and desire

The July issue of Race & Class takes up three topical themes: the monetarisation of private information, the politics of film and the demonisation of ‘anti-racism’. 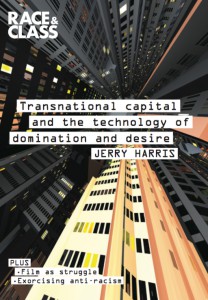 Jerry Harris, national secretary of the Global Studies Association of North America, in a provocative lead article examines transnational capital and what he terms ‘the technology of domination and desire’. The desire for new information technology products, particularly in the realm of social networking and media, has led to a monetarisation of our private information. The control of mega data servers, by both the state security apparatus and information technology corporations, has led to new forms of coercion.

The transformative power of film is examined in three contributions: on the impact of Robert Van Lierop’s A Luta Continua, an account of the 1970s Frelimo struggle, on African American politics; on the pioneering campaigning film-work of  grassroots-based Migrant Media, founded by Ken Fero, about black deaths in custody; and on the way that Gran Torino, a mainstream US movie, regenerated the myth of the American Immigrant Dream.

As the government resurrects notions of ‘British values’ Jenny Bourne and Jon Burnett consider how such ideas were in the 1980s – and are again now – being used by Right ‘thinkers’ to first distort the definitions and then deride the practice of  ‘anti-racism’.

You can buy a copy of the latest issue of Race & Class for £5 here.