To Birmingham with love 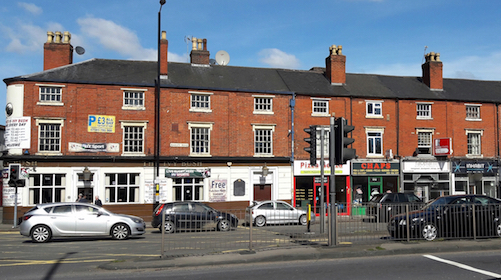 A Birmingham resident fiercely objects, in the wake of the recent deadly terror attack at Westminster, to the depiction of her city as the hotbed of extremism.

‘Birmingham. Birmingham. Birmingham. It’s always Birmingham’, writes the Daily Mail journalist when he talks about the links to Birmingham of the man who carried out the atrocity in London on 22 March 2017 and the previous arrests of people from Birmingham for terrorism. The article was written on the back of the police raid on Hagley Road in Edgbaston. It was the description of the area where the raid took place that drew my attention to the article (that and Dan Jukes, ‘Communications for Nigel Farage’, tweeting a link to the Daily Mail article and writing ‘What the politicians have done is close to treason’):

Officially, Hagley Road falls within the leafy Edgbaston postcode, but it has more in common with nearby Sparkbrook, which runs adjacent to this run-down part of Edgbaston (which famously boasts one of England’s regular Test match cricket grounds).

I went down Hagley Road the day after the initial police raid and passed the police vans and the TV crews parked on the double yellow lines on one of the busiest routes into the city centre. Perhaps it was because of the vehicles that I missed the kebab shops, cheap Asian outlets and boarded-up stores with broken windows because that isn’t a description I recognised from the day before when I travelled the same route. You would think from the reference to Sparkbrook that, as my journey continued, I’d rush to cover my head so as not to offend against Sharia Law. Instead my journey continued down on to Broad Street, Birmingham’s very popular entertainment hub with clubs, bars, cinemas, etc. Broad Street is much closer to the flat raided by the police than Sparkbrook – but why should the Daily Mail write that when it doesn’t suit the narrative. And even if I was in Sparkbrook, no one would be offended if I wasn’t covering my head!

I’m a Brummie. I was born in the city, grew up in the city and, despite living away for study and work from time to time, I am back here again and have no plans to move. I grew up and went to school in an area called Bordesley Green. One of them, Saltley School, was caught up in the ‘Trojan Horse’ affair many years later. I spent most of my time as a youngster either in Bordesley Green or visiting friends and family in Ward End, Alum Rock and Small Heath. When I returned to Birmingham, having been away for six years, I moved to Edgbaston, the ‘not leafy part’. (Those who know this part of Birmingham will know that life either side of the Hagley Road can be quite different.) I got married in a church just a few minutes’ walk from the spot where the police raid took place. And, for the record, it is still a church and not a mosque just in case you are wondering. My daughters grew up in this part of Edgbaston and went to a primary school in Winson Green, within walking distance of Birmingham Prison.

So when I read the Daily Mail article and the suggestions of ‘treason’ from those who want to whip up hysteria that can, in the wrong hands, lead to murder as we saw with Jo Cox, I get angry. Don’t get me wrong, Birmingham is a thriving city and one that is very different from the one that I grew up in and many of its inner-city neighbourhoods have changed considerably, not least in the level of deprivations that they experience.

Birmingham, like many others, is a tale of two cities. In the city centre we see vast building projects including HSBC which is moving its headquarters to Birmingham and renovation of the area where the old Central Library used to be. But we also have some of the highest levels of poverty and deprivation in the UK, not least in the areas immediately surrounding the city centre. Take Ladywood for example, quite literally the adjacent area to where the police raid took place, not one a few miles away like Sparkbrook.

In 2009, the Birmingham Mail carried an article ‘Ladywood in Birmingham is poorest place in UK’, referring to a report about the UK by The Campaign to End Child Poverty which said:

The results revealed Ladywood was the least wealthy region, with 81 per cent of families on a low income, 36 per cent living on working [tax] credits and almost half of adults living in the ward unemployed. Sparkbrook, Small Heath and Hodge Hill were also in the top ten of the most deprived wards in the country and had high levels of child poverty.

Note the reference to Sparkbrook by the way, given its prominence in the Daily Mail article referred to above.

In its 2013 report, ‘Local Authorities and Child Poverty: Balancing Threats with Opportunities’, the Child Poverty Action Group (CPAG) reported that Birmingham had the largest number of children in poverty. For information, 40 per cent of the population in Birmingham is under 25. It is the youngest major city in Europe.

In June 2016, the Birmingham Mail carried an article based on a report by the Birmingham Child Poverty Commission in which they found that 37 per cent of children in Birmingham lived below the poverty line but, when it came to four areas of the city, including Ladywood, they found the following: ‘In inner-city Ladywood, Hockley, Aston and Nechells that figure leaps to 47 per cent.’

Don’t misunderstand me. I am not saying that poverty and deprivation in Birmingham explain the atrocity committed by a 52-year-old man from Kent with a string of convictions including violence or the criminal activities that other men connected to Birmingham have committed (and yes let’s not leave out gender in this debate about extreme violence). Whatever experience or ideology led Masood down a violent route is obviously more complex. And from statements since released by Scotland Yard, ‘we will never understand why he did this‘.

Whatever the reasons behind the attack in London on 22 March 2017, it will no doubt be recorded in the annals of the Henry Jackson Society (HJS) as an ‘IRO’, an ‘Islamism Related Offence’, and Birmingham will forever be associated with it. At some point, we will find people mulling over HJS and other reports to join the chorus of people wanting to label Birmingham for their own purposes and not for our benefit.

Take Andrew Gilligan in the Sunday Times on 5 March 2017 for example in his article headed ‘Revealed: Terror map of UK’:

A tenth of all Britain’s Islamist terrorists come from just five council wards in Birmingham, according to the most comprehensive study of terror convictions in the UK…. The disclosure that such highly segregated, heavily Muslim and deprived neighbourhoods have such high numbers of convictions will raise new concerns about integration and cohesion.

The study to which Gilligan refers is ‘Islamist Terrorism: Analysis of Offences and Attacks in the UK (1998 – 2015)’ in which 269 offences were examined. Leaving aside the misnomers of ‘Islamist’ and ‘Islamism’, the reference by Gilligan to segregation is interesting. What the report says is: ‘19% of IROs were committed by individuals living in a neighbourhood where the Muslim proportion is between 60% and 80%.’

And from that, the conclusion is:

It is possible to identify a general trend whereby offenders were more likely than the national Muslim average to be living in neighbourhoods where the Muslim proportion of the population was 20% or above.

The statistics don’t lead to a conclusion of segregation. If I take that line of argument, then Khalid Masood, known as Adrian Russell Ajao as a child, grew up in a highly segregated neighbourhood – Tunbridge Wells is 97.5 per cent white. Maybe we should be looking at their segregation and lack of integration!

The HJS report found that almost half (48 per cent) of offences were committed by individuals living in areas referred to as ‘highly deprived’. As another Birmingham resident, Asim Riaz, quoted in the Guardian on 25 March 2017, said:

The problem is disenfranchised youths – they are the ones who can be manipulated. They feel they don’t belong in the UK even though they were born here. They feel rejected by their country. It’s not an Islamic thing. It’s about feeling ostracised.

If you want to talk about politicians letting Birmingham down and what to do about it, then let’s have that conversation. But you need to stop portraying Birmingham as a city of segregation and violent extremists because many of us who live here have a very different view of our city.

The enemy of both poor Asians, poor white people, poor black people and poor immigrants is a completely unfair rigged economic system based on class discrimination.