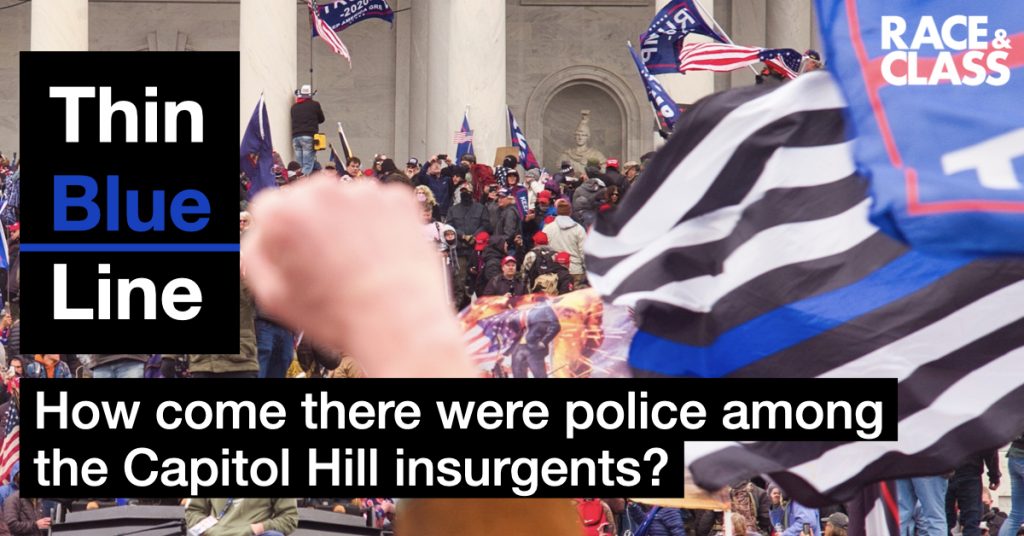 How come there were police among the Capitol Hill insurgents?

Two Race & Class authors, Jarrod Shanahan and Tyler Wall, explain the disorienting image of far-right protesters, including off-duty cops, holding the pro-police Thin Blue Line flag aloft as they clashed with on-duty Washington D.C. and Capitol police on 6 January. Their full analysis on ‘Fight the Reds, Support the Blue: The John Birch Society, Blue Lives Matter, and the US Counter-Subversive Tradition’ is forthcoming in Race & Class.

The turbulent rise of the Trump movement in the United States uplifted and transformed the topography of the US far Right. Central to Trump’s activist base was the movement of rank-and-file cops and their admirers, organised under the banner ‘Blue Lives Matter’. As the name suggests, this movement is an explicit rebuke of the Black Lives Matter (BLM) movement, dating back to the mass street mobilisations of 2014. The 2020 George Floyd Rebellion, Trump re-election campaign, and ‘Stop the Steal’ campaign to overturn the presidential election represented rallying points for Blue Lives Matter and a point of convergence for other far-right forces, like the Three Percenters militia and the Proud Boys. The amalgamation of these groups laid the foundation for the deadly 6 January siege of the US Capitol, which presented the disorienting image of far-right protesters, including off-duty cops, holding the pro-police Thin Blue Line flag aloft as they clashed with on-duty D.C. and Capitol police. How could a movement purporting to support the US police end up implicated in a violent insurrection which claimed the lives of two police officers?

In order to make sense of the Capitol siege, we argue, it is necessary to examine the longer tradition of rank-and-file activism within US police forces, which dates back to police resistance to the so-called ‘procedural revolution’ of the Warren Court in the 1950s and 1960s. In contrast to a functionalist account of the police, which flattens law enforcement and government together as a monolithic power called ‘the state,’ this history reveals the police to be capable of independent grassroots organising to push back against civilian checks to police power, and especially, the encroachment of the federal government into the independence of local police departments. These early efforts also put the activist cops of the 1960s in league with local institutions of white power resisting federal civil rights legislation, and laid the basis for the ‘law and order’ movement on the national level. In this time US cops have organised effectively through their unions – an increasing topic of interest, in recent years, given these institutions’ obstruction of police reform and defence of cops accused of misconduct – but also through activist campaigns not unlike those one finds on the Left. To explore this latter history, we draw from a trove of archival documents, many previously unpublished, to examine one organising effort in particular: the John Birch Society’s (JBS) Campaign to Support Your Local Police (SYLP).

The SYLP campaign was a self-understood ‘front group’ of JBS, founded in 1963, amid the early boon of police organising in the United States. It played a particularly notable role in co-leading the campaign against establishing a civilian complaint review board (to replace one staffed by high-level cops) to monitor the police in New York City. This activism was part of a national campaign to combat the Warren Court, the Black Freedom Movement, and the New Left. The rhetoric of JBS and SYLP was a cartoonish Cold War vernacular that emphasised shadowy conspiracies up and down the ranks of the US government, from local police chiefs resistant to SYLP, to the highest reaches of the federal government. For instance, JBS founder Robert Welch claimed President Dwight Eisenhower was a clandestine communist.

While this conspiratorial rhetoric is often used to dismiss JBS in hindsight, we argue that doing so misses the powerful impact the group was able to have – either in spite of its wild conspiracies, or because of them – in galvanising the nascent activist power of local cops, and shaping the movement of politically-active police unions that arose in the time between SYLP and Blue Lives Matter. ‘Support Your Local Police’ caught on, becoming a reactionary rallying cry of the nascent ‘law and order’ zeitgeist. Its message offered many rank-and-file cops and members of the white middle-class an organising mythology, a ready-made narrative on the necessity of local police forces to resist ‘regulation’ from a corrupt federal government while aggressively policing ‘black and white unity’ on the grassroots level.

We have several reasons for calling attention to this long-forgotten activist effort of the similarly obscure JBS. (Incidentally, both still exist today – which is news to most people.) First, JBS as a parent organisation traces its roots to the movement among the US ruling class against trade unionism, the New Deal, and Bolshevism, while simultaneously serving as a bridge to the so-called New Right which opposed the Black Freedom Movement and the New Left of the 1960s. Following Jordan Camp and others, we find there to be a profound history in the feared conflation of Black Power and white radicals in the eyes of the US right, extending to the present day, when this couplet has been rechristened ‘BLM and Antifa’. Second, like Blue Lives Matter, SYLP was an effective tripartite organising vehicle – at once a meme, a movement, and an official organisation – enabling a relatively small number of organisers on the national and local levels to carve an outsized role for themselves in both local political and the national discourse around law enforcement.

Third, the positioning of SYLP against the federal government, and often against state and local politicians who did not support the autonomy of the police, provides a framework for understanding a longer-term trend in anti-state politics within law enforcement organising that predates the Capitol riot by decades. Fourth, JBS represents an earlier form of the kind of wildly conspiratorial politics we see today around QAnon, the ‘deep state’, election fraud theories, and other outlandish political rhetoric which nonetheless successfully mobilises the far-right and seeps into the mainstream political discourse as well. Through JBS, we explore its material basis in local challenges to federal power. Finally, many of the key themes, chief among them the imperative to ‘Support your local police… and keep them independent!’ which today defines the Blue Lives Matter movement, were honed in the 1960s by SYLP and its fellow travellers.

While we do not propose a smoking gun linking the two movements neatly in the kind of conspiracy narrative JBS might have advocated, we do provide considerable evidence that the language and guiding politics of SYLP, including the campaign’s name, provided inspiration for the founding of Blue Lives Matter. In any case, we understand the two as bookends of a long tradition of rank-and-file mobilisation within the US police. This is not to suggest the past and present are one and the same. There is no doubt the political economies of capitalism and racism have certainly shifted in many ways from the heyday of JBS and SYLP. Nevertheless, it doesn’t seem like much of a stretch to suggest that the current conjuncture defined by racialised conspiracy, police powers, and capitalist crisis owes much to the history of SYLP.  For the purposes of understanding the siege at the US Capitol, the history of SYLP, and its present-day heir, Blue Lives Matter, instructs us that police have a political agenda that is uniquely their own, and in moments of social crisis, can target perceived adversaries in the organized Left, as well as local, state, and federal governments.

Tyler Wall is an associate professor of Sociology at the University of Tennessee, Knoxville. He is the co-author of Police: a field guide (Verso 2018).