The Windrush scandal exposes the dangers of scaremongering about ‘illegal immigrants’ 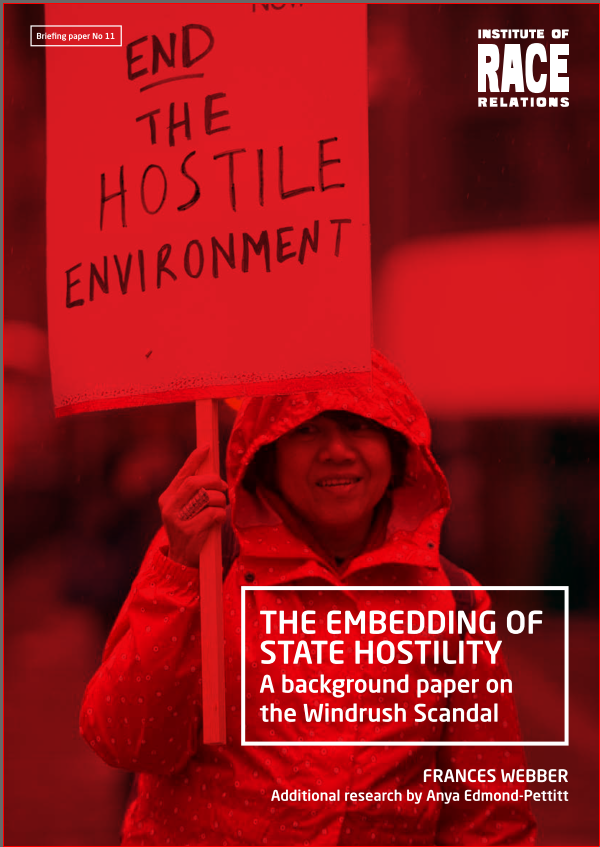 The Institute of Race Relations (IRR) publishes today a background paper showing how the injustices meted out to the Windrush generation are not anomalies but the logical result of an immigration system that, over many years, has weaponised the idea of ‘the illegal immigrant’.

How can people who considered themselves British over a lifetime suddenly be told that they are no such thing? How did a person’s immigration status become so life-defining? When did ‘illegal immigrant’ change from a regulatory phrase into a badge of criminality?

These questions, thrown up by the Windrush scandal, are addressed by Frances Webber, a former immigration lawyer and vice-chair of the IRR, in her background paper The embedding of state hostility, published today.

*examines the Windrush scandal in the context of three decades of immigration law, based around a set of interlocking policies of denial, exclusion, surveillance and enforcement that, taken together, have coalesced into today’s ‘hostile environment’;

*shows how the good immigrant/ bad immigrant dichotomy, and the term ‘illegal immigrant’, have, at different times, been deployed by politicians, aided and abetted by a constant scaremongering from sections of a hostile media.

According to author Frances Webber,

‘The roots of some hostile environment policies are very deep and the idea that they have been dismantled overnight, simply by a change of phrase – not “hostile environment” but “compliant environment” — is wishful thinking.  The UK’s immigration policies have turned all foreigners into a suspect population and our society into a nation of border guards.’

This 30pp background paper has sections on: the build up to the Windrush scandal; case studies of those affected; the roots of hostile environment policies; the role of the media in weaponising ‘illegality’; the government’s retreat from universal human rights standards; the role of campaign groups and professional organisations in challenging the hostile environment and standing up for the Windrush Generation.

The embedding of state hostility: a background paper on the Windrush scandal can be downloaded here