The ‘Windrush generation’ retreat and the hostile environment

The ‘Windrush generation’ of long-resident, elderly Commonwealth citizens has won a moral victory, with an apology from home secretary Amber Rudd and her predecessor, Theresa May, the architect of the ‘hostile environment’ policies which saw many of them dismissed from long-held jobs, denied housing and medical treatment, and threatened with deportation, for want of proof of lawful residence.

The government has sought to treat the whole issue as an unfortunate oversight, brought about by individual carelessness (disposal of boarding cards some years ago) and over-zealousness on the part of officials. But as rights groups, many commentators and some MPs have realised, it goes much deeper than that. Racism, unlike wealth, trickles down from the top, and a punitive political culture, combined with a Home Office culture of targets whose aim is exclusion, makes injustice inevitable.

The focus of the Guardian stories, which provided the impetus and focus for MPs’ and public anger, and forced the government climbdown, has understandably been on those who arrived in the UK as children, some with British passports, issued to them or their parents as colonial citizens before their countries became independent. Some of this group arrived before immigration controls were imposed on Commonwealth citizens in 1962, others were granted indefinite leave to remain on their arrival between 1962 and 1973. Most lost British citizenship when their countries became independent, but many would have been eligible to register as British after five years’ residence here. In any case, their lawful status should never have been in doubt.

What about long-term overstayers?

The narrow focus on those with the right to remain but unable to prove it does not disturb the Home Office overarching divisive narrative which insists that those without such legal rights must be excluded, removed by Border Force or G4S officials, or forced out by the hostile environment measures which are calculated to make life impossible for those in the UK without permission. Those who arrived here decades ago as students or short-term workers and simply stayed on, are technically illegal – but they too have worked, paid taxes, had families, put down roots, become settled, and British in all but law. 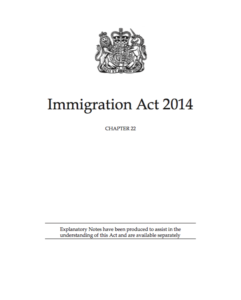 Until recently, this – the fact that life goes on regardless – was recognised in various ways in the law and the immigration rules. In one important way that has become relevant now. Commonwealth citizens who were lawfully in the UK on 1 January 1973 were by law exempted from deportation, or from removal as overstayers, once they had chalked up five years’ residence, even if by then they no longer had permission to be here. But the exemption from removal for long-term overstayers was quietly repealed by the 2014 Immigration Act, with no consultation – ministers promoting the Bill did not mention it before or during its passage through parliament (or afterwards), and made no attempt to find out how many people would be affected by the repeal. The repeal was not noticed by immigration lawyers or experts, until I discovered it ten days ago.

Measures announced by Rudd to help long-resident Commonwealth citizens with legal status but unable to prove it, include a team of twenty officials who will speedily establish their rights – within two weeks of a request; they will actively help those seeking to prove their status, rather than sitting back and demanding four pieces of evidence for each year of residence, as before; and there will be no charge for the ‘no time limit’ stamp proving the holder’s right to live, work, study, rent, drive, have a bank account and receive hospital treatment in the UK. There is also a promise that no one will be detained for deportation while these inquiries are being made. Anyone who has been wrongly removed will have their case ‘looked at’ (so far, no cases have been identified). There will be a dedicated hotline for MPs to raise constituents’ cases. The default position will be to accept applications, and Theresa May has even used the word ‘compensation’ in relation to those who lost jobs or other rights. The contrast with the normal ‘culture of disbelief’ of the Home Office could not be sharper. It remains, of course, to be tested – but given the embarrassment suffered by the home secretary and the prime minister, we can anticipate unprecedented helpfulness towards this particular cohort, the ‘Windrush children’.

But what will happen to those pre-1973 Commonwealth entrants admitted for study or short-term work, who lost their legal status decades ago? Until 2014, they would have been protected against removal if they could prove entry before 1973, and residence for the past five years. But now the exemption for long-resident Commonwealth overstayers has gone. If they come forward in response to the government’s assurances, will they be told they have no right to remain, and be removed as overstayers? Or will media and public pressure force the government to stay its hand and reinstate the exemption? We need to know.