The road to anti-racism 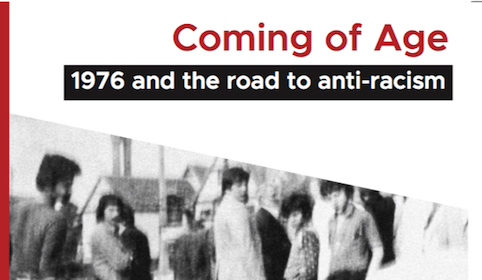 A unique project tells the tale of how militant anti-racists in the 1970s helped create the multicultural London now taken for granted. 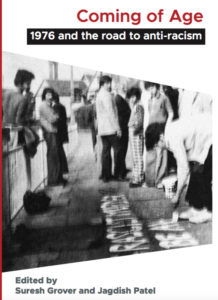 1976-7 was the pivotal year in the annals of British anti-racism. There was the vilification in the press of Asians fleeing Malawi, the murder of Gurdip Singh Chaggar in the heart of Southall, the electoral rise of the National Front. But there were also unique fight-backs: the Grunwick strike, led by Asian women from East Africa; the creation of the first Asian youth movement; the riots against the police at Notting Hill with its echoes of Soweto; the confrontation against fascists and police at Lewisham; the birth of Rock Against Racism.

It was the events of the late 1970s, too, which led to the creation of Southall Monitoring Group (SMG), now known as The Monitoring Group, involved in this unique project to recall the importance of those struggles and record the voices of political activists on whose shoulders a new generation of BAME campaigners now stand. ‘There have been various heritage projects which have told aspects of the different events’, the project explains, ‘but no project has linked the series of events into a cohesive narrative … there is an overwhelming demand by people from the earlier generations of migrants to emphasise how different communities worked together in the past. Many of the individuals who were activist in 1976 are now much older, and their stories have never been told, and their contribution to building the modern multicultural London is mostly unacknowledged. This project provided an opportunity to document their stories.’ This is a telling of ‘history from below’ and telling it like it was. 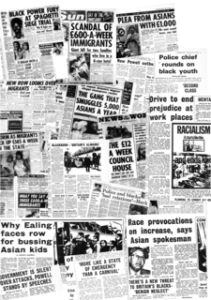 The project ‘curated ‘by veterans Suresh Grover and Jagdish Patel has many facets: exhibitions, schools packs, a website and now a huge 218-page book entitled, Coming of Age: 1976 and the road to anti-racism, which brings together a unique and wide-ranging collection of writings, interviews, photos, timelines of key moments and newspaper cuttings that breathe life into the anti-racist resistance story of the last century.

1976 was the year that instances of the many forms of black struggle against racism came together – sometimes one after the other, sometimes simultaneously. It was the year that black anti-racism inspired and gave a lead to white anti-racists on many fronts: racist attacks and murders, fascist violence, racist immigration laws, black worker strikes, police harassment, press incitement to racism, the struggle against apartheid, to name but a few. And significantly this book makes such connections all the way through, linking struggles of early migrant seaport settlers to those of the post-war generation, those of Asian communities to those of West Indian’s, women’s with men’s, the anti-racist and the anti-imperialist, the streets with the town halls, the arts with their communities. 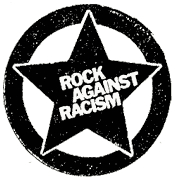 But 1976 has to have historical context. This complex set of stories is prefaced by an in-depth look at struggles in the first half of the twentieth century, with two long narratives − one by Jacqueline Jenkinson on the little known story of riots and resistance to racism in South Shields in 1919 and second, A. Sivanandan’s seminal From resistance to rebellion: the struggles of Asian and Afro-Caribbean struggles in Britain (1982). Pieces by Claudia Jones and Gus John complement historical accounts of the resistance and rebellion of the quarter century before 1976.

Thus we are made ready for the stories in Part 2 from the 1976 protagonists. Through a series of (then and now) interviews and articles by a selection of African Caribbean, Asian and Black British activists in the mid 1970s, differing assessments and accounts of struggles over the years are offered. We hear from the late Vishnu Sharma (of the Indian Workers’ Association), Karamjit Chaggar (brother of Gurdip), Suresh Grover (founder of SMG), Avtar Brah (a founder amongst other things of Southall Black Sisters), Balraj Purewal (founder of Southall Youth Movement), Laxmiben Patel (of Grunwick strike), Gautam Appa (academic and activist), Stafford Scott (partaker in Notting Hill Carnival 1976 now of Tottenham Rights), Cecil Gutzmore (analysing the Carnival events), Gurinder Chadha (at the launch of Rock Against Racism).

The stories in this volume comment not just on overt political physical battles against police harassment such as at the Notting Hill Carnival of 1976, but also include literary/ cultural dimensions of struggle such as the founding of New Beacon Books and the Caribbean Artists Movement. The Indian Workers’ Association (IWA) activity around the Grunwick strike is connected to the struggles in India by Gautam Appa and to fighting discriminatory immigration controls by Vishnu Sharma. Essentially the ‘Coming of Age’, recounted and illustrated so graphically here, is the history of how first- and second-generation post-war ‘immigrants’, through a mosaic of struggles, forged what Sivanandan has termed ‘Communities of Resistance’ and made black a political colour.

With endnotes, including bibliography, timeline, and lists of racist murders and industrial disputes 1965-75, this hefty volume in itself provides an important archive to inspire future generations.

Coming of Age: the road to 1976 and the birth anti racist movements

Anti-racist movements against European colonialism and imperialism existed from the beginning of the British Empire. Resistance is one of the basic emotional responses to a threat and, though largely expunged from the Western historical memory, black and brown people did fight slavery and colonialism. However, through the deployment of cunning hegemonic strategies, the resistance wan’t capable of defeating the imperial project.

Another history of resistance against Western Imperialism is that of the many 1000’s of migrant labourers that found themselves transported to the corners of the British Empire as a reserve army of labour. The UK, as the ‘mother country’ saw large numbers of black people from the Indian sub continent and the Caribbean settling into the major inner cities during the post war period.

Though there are heartwarming stories of conviviality displayed by the host white communities, the is also another story of overt and covert racism, both at the street level and in the schools and workplaces. Rekindling the traditions of struggle by their forefathers, the new migrants began to organise resistance against racism, the difference being now it was in the ‘mother country’.

This important collection of stories, archival material and analysis of the anti-racist movements that rooted themselves in places like Notting Hill, Southall, Brixton and other inner cities of the UK is rich resource that needs to be part of the national curriculum. This history of struggle is an integral feature of the contemporary British narrative and therefore it needs to be understood as such.

The rise of all kinds of religious fundamentalisms in the world and UK over the past 25 years has led to a fragmentation of anti-racist struggles of the 60’s and 70’s. Struggles that united the communities under the collective concept of ‘black’, signifying all peoples who were subject to British Colonialism and Imperialism. Sadly today, through a combination of neoliberal conservatism and the promotion of a ‘faith agenda’ and increased confidence amongst religious organisations, the anti-racist project lies in tatters.

The voices of secularism and socialism that were the hall mark of the post war anti-racist movement have been pushed to the margins. The demands for social justice that were made by these movements were built on an analysis of the intersections of race, class and gender in the production and reproduction of oppression and imperialism. Today the voices of religious conservatives and fundamentalists are driving young people down a sectarian faith based identity politics. Today, left progressives from all faiths and none need to reclaim this rich heritage and forge new anti-racist alliances to defeat the forces of oppression that are manifest both in the British State and its neoliberal policies and reactionary religious groups, be they Christian, Muslim, Hindu, Sikh or Jewish.

Where can I find this book?