The Pandora’s box of German fascism has been opened

Below we publish an edited version of a speech given by a spokesperson for the Berlin anti-fascist documentation centre Apabiz at a symposium held at the HAU Theatre, Berlin*.

‘The problems we face in Germany today are twofold. First, the emergence of a far-right electoral party that is gaining between 10 and 25 per cent of the vote in state elections. Second, the activities of a far-right racist, anti-Muslim and anti-refugee movement on the streets.

Over the last decade we have been experiencing the ongoing propaganda against the so-called ‘Islamisation’ of Europe and Germany. It was here in Berlin, back in 2006, that ‘concerned citizens’ first went on the streets to prevent the building of a mosque – a type of protest that has spread across Germany in the years to follow.

But we should also remember that the ideological thrust of this right-wing movement was widely reinforced and spread through the mainstream media, as well as social media.

So today we witness a far Right in turmoil. For although, at the grassroots, many of these seemingly spontaneous anti-Muslim and anti-refugee demonstrations were actually organised by extreme-right activists and even neo-Nazi groups, like the National Democratic Party of Germany (NPD), these parties have not reaped the political benefits.

Since the rise of the Pegida movement in 2014 and after those driven by war from the wastelands of Syria found their way to Germany, terrorism against refugees, their homes and their temporary shelters has exploded. 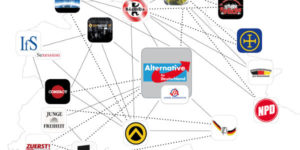 Ironically, it is not the old far-right and neo-Nazi networks that are surfing the crest of the racist wave, it is the New Right and it is Alternative für Deutschland (Alternative for Germany, AfD). Yet, and this is very important to understand, the neo-Nazi NPD, as a party, may be on the decline, but its ideology is definitely not!

The situation is complex and rapidly changing and, as such, not always easy to analyse. But in my opinion, we now have in Germany a pre-fascist movement that is aiming to take power in order to reform the political process so as to transform it into an authoritarian, völkisch system.[1]

So my suggestion is that we understand and analyse developments on the German hard Right in terms of the emergence of a new völkisch movement that has elements of both Storm Trooper-style street terror and a national-Conservative electoral party.

In Germany, if such a coalition on the far Right were to materialise, it would need certain conditions to ensure its survival.

First of all it would be necessary to get rid of the leading role that the Conservatives have played, post-war, in shaping the Right and isolating Nazism. So it is first of all an anti-Merkel-movement and an anti-anti-Nazi-movement.

At the same time, in order to succeed, the new far Right has to deal with a quandary: how to stay far enough away from yet also close enough to the angry mob on the street. It was such a mob, fuelled and led by people that in the 1990s, as we in the anti-fascist movement well know, incited racist youth to attack foreign contract workers and refugees at Rostock and Hoyerswerda. We witness now a continuity of street terror, as one older generation of neo-Nazi criminals hand over knowledge and tactics to a younger generation.

So right now we see a movement that is combining elements of (pre-)fascism, of traditional anti-democratic Conservatism and of far-right populism – and the dynamic between them, as yet, is unbroken.

This movement wants to crush the idea of social democracy – or what is left of the idea, if you like. This movement’s reference point is not the discredited system of German National Socialism. It is the ideas of the pre-fascist, elitist and anti-democratic Conservative Revolution.[2] It is this that makes it possible and capable of reinventing a fascist perspective acceptable in our times.

Those Conservatives that split from the Christian Democrats to join the AfD are the ones who hold the greatest responsibility for opening Pandora’s box.

* The Return of European Fascism was part of The Aesthetics of Resistance festival curated by Bini Adanczak to celebrate the work of the late Peter Weiss. Listen to all the speeches here. [1] A reference to the populist movements which first emerged in Germany in the 1890s in the context of a romantic nationalism. After the first world war, the Volkisch's movements ideas on militarism, blood and soil and the 'organic national community (the Volk) became openly anti-Semitic and were linked to the rise of Nazism. [2] The Conservative Revolutionary movement was an apocalytical anti-liberal movement which gained in influence after first world war. The ideas of its key theorists have proved very influential on the development of neoconservatism and the New Right today.