Kevin Searle’s ‘“Mixing of the unmixables”: the 1949 Causeway Green “riots” in Birmingham’  examines a hitherto unknown landmark in British race relations which throws into question standard accounts of postwar immigration.

Most popular accounts begin with the arrival of Jamaican immigrants on the Empire Windrush, and place the 1958 disturbances in Notting Hill and Nottingham as the first postwar ‘race riots’. Searle’s account reveals an earlier history of conflict between West Indian workers and their European and Irish contemporaries in labour hostels for migrant workers. Further, the ‘racial’ housing policies of the hostels may well account for later long-term black settlement patterns in the UK.

The article, appears in the January 2013 issue of Race & Class which, also includes A. Sivanandan’s ‘The market state vs the good society‘, which analyses the rise of neoliberalism in the UK, arguing that the market state no longer serves the nation, but transnational capital. Government rhetoric about the small state, ‘big society’ and localism are cons that smooth the way to privatisation, the undermining of democracy, and the imposition of market morality. And Michael Grewcock examines developments in Australian border policing policy since the election of a Labour government in 2007. 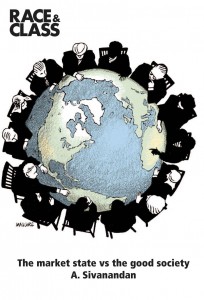 Race & Class is published quarterly, in January, April, July and October, by Sage Publications for the Institute of Race Relations; individual subscriptions are £33/$61. You can also buy an online subscription for £18 which includes access to the last three years' issues.

It seems to me that much in the way of Black rights, immigrant rights, is rather curiously something that is taken on by the White Middle class. When I write to the Institute of Race Relations, I never get an answer, and what I write to them about (mainly) is why they seem to ignore, deftly and studiously, the rights and issues of White Working class people. It seems to me that, instead of really being concerned for Black rights, Immigrants rights, they are in their own little way turning poor Black people against poor White people, and playing each group off against each other, but for what purpose I can’t say why; or perhaps I can. My instincts are that because often Middle class people prosper, sometimes at the expense of the poor, be they poor Black, poor White or poor immigrants, they use their promotion of Black rights and so on as a smokescreen, to distract us from the REAL injustice at the heart of Britain. That injustice is the slowly creeping economic apartheid that now exists in Britain and indeed many wealthy Western countries. Whilst some people at the top earn millions, some in the middle bracket earn many thousands and even hundreds of thousands, many poor people at the bottom, Black, White, Asian, Immigrant, whatever are earning minimum wage in often dead end jobs that go nowhere.

The problem with poltical correctness, especially the White Middle class variety, is that it is rather confused and rather naive. The assumption seems to be held that ALL White Middle class people are non-racist, non-sexist AND therefore somehow all White Working class people, never said but heavily inferred are all racist and workshy and etc etc. Usually negative stereotypes. Black people, Asian people, Immigrants, even though all people are different, are portrayed as suffering saints, when the reality is that Black people, like White people, like people anywhere are good, bad and indifferent.

Yes, I agree with much of what the Institute of Race Relations is trying to do, in its rather naive and questionable way, it’s just that I wonder why they have to demonise one group of people (the White Working class) whilst making other groups of people seem an amorphous mass with no opinions other than those grafted on to them by the Middle class.

Mr Childs should at least have the courtesy of reading what he is about to critique. As far as I can see, articles in this journal – particularly those by Sivanandan and Searle – are precisely looking at what happens to the working class – whatever its hue.

OK, when I have the time I will look at the articles; Can you recommend any I should look at particularly? I have an issue with the Institute of Race Relations because when I email them they don’t bother to reply to me, so you can understand why I feel a little peeved. My issue isn’t with anyone who is genuinely concerned about many of these issues, but those who use political correctness to play mindgames, pretending to be socially aware but being just as greedy and selfish as those who rule, divide and ruthlessly exploit in this so-called democracy. And, I wasn’t particuarly critiquing anything. But you’re right, I should read a few things first 🙂