Taking on the fraudulent anti-globalisation rhetoric of the Front National

A timely pamphlet aimed primarily at French trades unionists provides an opportunity to reflect on the FN’s growing appeal to working-class voters.

‘If we don’t stop the waves of immigration, in ten years whites will become a minority in France.’

‘If we had real freedom of expression we would be able to say anything, including racist remarks.’

‘Foreign workers from poor countries are ready to work for any kind of salary and under any conditions; it is because of them that there has been a social recession.’ 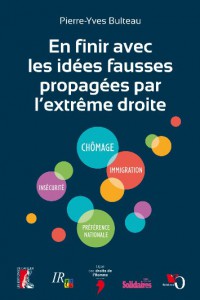 It is myths such as these that journalist Pierre-Yves Bulteau, with the financial support and research assistance of charities, trade unions and organisations,[1] attempts to debunk in the (French-language) pamphlet, En finir avec les idées fausses propagées par l’extrême droite (‘Putting an end to the myths spread by the extreme Right’). In this attractively produced, simply written and accessible 160-page pamphlet (perhaps, more aptly described as a small book), Bulteau takes 73 popular myths propagated by the far Right and breaks them down into the generic themes of: ‘The foreigners are guilty’; ‘It’s the system’s fault’; ‘France for the French’ and ‘False solutions’.

The author sets out with a purpose, to provide: ‘a weapon to arm the members of our organisations who ask us how to respond.’ This timely intervention came shortly after the French local elections in which the Front National (FN) captured 1,546 municipality seats and gained control of ten towns across France, and on the eve of the European elections where a quarter of French voters cast their vote for the FN. Amongst FN gains was the previously Parti Socialiste (PS) stronghold of Hénin-Beaumont. A mayor who ran on the FN ticket is Robert Ménard, a founder of Reporters Without Borders and former activist with the Revolutionary Communist League[2]. Similarly, Fabien Engelmann, the new mayor of Hayange (once famous for its iron mines) was formerly active in the Trotskyist party, Lutte Ouvrière (Workers’ Struggle) and the Nouveau Parti Anticapitaliste (New Anticapitalist Party), which he broke with when it fielded a veiled Muslim woman candidate in a regional election. His former trade union, the CGT, attempted to expel him when his affiliation to the FN became known.

Not only is the FN appropriating anti-capitalist rhetoric and left symbols and traditions (its annual march is traditionally held on May Day), and speaking the language of anti-globalisation, but it is now steadily sweeping up the votes of disgruntled former Socialist and Communist party voters, both in rural areas and former manufacturing towns like Hénin-Beaumont. It captures the votes of the disenfranchised, public workers, pensioners and conservative small businessmen by vowing to protect them from unfettered markets and immigration.

This is the context, then, for Bulteau’s concern about the growing acceptance of racism against migrant workers, mainly originating from eastern European countries. In the section entitled ‘False Solutions’, Bulteau sets out to analyse the extreme-Right argument that immigration is unsustainable and that migrants’ impact on wages and welfare will always be negative, and to show the dangers of the FN call to put the native French first through policies of national preference. In response to the FN argument that ‘there are too many workers and not enough jobs for everyone, and for this reason we must give priority in employment to the French’, Bulteau urges his readers to seek solutions by joining a wider fight for better working conditions, a living wage and employment security, rather than falling for the divisive tactic of scapegoating migrant workers. Anti-racism, Bulteau argues, needs to become embedded in workplace struggles, if we are going to stop the FN from presenting itself as the anti-austerity party. Just how significant Bulteau’s intervention is becomes clear when we recall Marine Le Pen’s ‘Tour de France des Oublies’ (‘Tour of France of the Forgotten’) which she undertook in 2013 as a means of meeting the ‘small people’ sacrificed to multinationals by EU and French government officials. Using this anti-globalisation rhetoric to mask its traditional xenophobic stance against both international and intra-European migration to France, Le Pen managed to capture the votes of workers who would previously never have joined or voted for the FN.

But, of course, the FN’s popularity goes beyond the issue of immigration. While most of the pamphlet responds to the popular myths surrounding employment and migration, Bulteau also considers the appeal of Islamophobia to FN voters, particularly the use of laïcité[3] as an anti-Muslim tool in order to justify racism. In fact, since gaining control of ten towns, it is anti-Muslim sentiment that Marine Le Pen has prioritised, announcing in April that school canteens in FN towns would no longer cater for those who do not eat pork. Additionally, the FN mayor of Hayange proposes to establish a ‘Pork Fest’. With statements like: ‘White Christian foreigners who have come to France have integrated themselves because they have the same culture and religion as native French people. Today, this is not the case with the Muslims who come to France’, it is clear that the FN demand for French Muslims to assimilate into French culture has made racism more acceptable. Bulteau could have said much more on this subject, as he does not dwell on the causes of anti-Muslim racism, instead encouraging a more inclusive interpretation of French laïcité.

But, in the final analysis, Bulteau’s intervention is important, particularly when it is seen alongside a number of other recent developments in the ten towns the FN won. Since the March municipal elections, several organisations have been created to ‘monitor’ or directly resist the racist and divisive policies of FN mayors. Opposition is vital to uphold democracy, as FN mayors are already acting in autocratic ways, attacking any signs of cultural diversity and fanning the flames of xenophobia. The FN in Toulon is seeking to prevent the naming of a square in front of the train station after Nelson Mandela. And in Mantes-la-Ville, the FN is blocking the construction of a mosque which had been agreed by the previous administration. There are many more actions of resistance, ranging from teachers of the Paul Langevin school in Beaucaire refusing to sit on the Administrative Council alongside three elected FN representatives (they held a rally outside the school gates instead), to the creation of an anti-racist sub-section of the ‘Barreau de Lyon’, or the ‘Lyon Bar’, by lawyers who aim to monitor the legality of the FN’s actions. Such actions and new organisations like the monitoring centre ‘Mantes en Mouvement’ show that the growth in FN popularity has provided the impetus to strengthen opposition and resistance. Actions and publications such as these show that there is a determination to disrupt the FN in its attempts to appeal to and represent the French ‘everyman’.

[1]  Including the Institut de recherches de la FSU, Ligue des droits de l’Homme, Editions ‘La Vie Ouvrière’, Union syndicale Solidaires, la CGT, FiDL, JOC, Mrap, Unef, and UNL. [2] Several of the FN-backed mayors are part of the so-called 'Blue Marine' grouping which means that they ran with the FN support whilst not necessarily being card carrying members of the FN, bringing FN and far Right mayoral wins to twelve. [3] Laïcité is the French term signifying the separation of religion and the state.