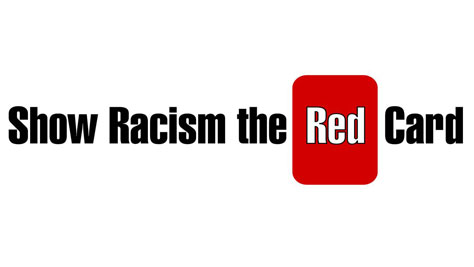 At a time when anti-racism in education is often being reduced to ‘cultural awareness’ projects, Show Racism the Red Card’s direct tackling of racism is welcome.

Yet some thirty years later, there is a new watering down of racism – seeing it as a product of a lack of shared values, of communities not being afforded enough opportunity to meet and mingle. And against this backdrop, Show Racism the Red Card’s (SRtRC’s) hard hitting educational materials on anti–racism are valuable resources.

Growing from a £50 donation by the then Newcastle United goalkeeper Shaka Hislop to anti-racist campagners in the locality mid-1990s, SRtRC has become a leading educational organisation in the UK, producing materials, providing workshops in schools and, in Scotland, combating racism within football. In the process, current professional footballers have been encouraged to lend support, featuring on the DVDs that are used as resources, and former players help give workshops. Part of this work is achieved through the production of ‘education packs’ on various aspects of racism, including (but not exclusively) that directed at asylum seekers, Gypsies, Roma communities and Travellers, and on Islamophobia. The packs are designed for upper key stage 2 pupils (aged 11, in England and Wales) and older.

SRtRC’s materials are at their strongest when they use innovative ways to show how racist ideas can circulate, and where they stem from. In their education pack about Islamophobia, a section on ‘media myths’ asks pupils to read and discuss newspaper headlines about Muslims such as ‘Hogwash: now the PC brigade bans piggy banks in case they offend Muslims’ (Daily Express) or ‘Get off my bus I need to pray’ (The Sun). All of these headlines are real; all of them propagate lies. And pupils are asked to reflect on the ways such portrayals impact on the perception of Muslim communities. Similarly, in the pack on asylum seekers, headlines such as ‘Kick out the scum’ (Daily Star), ‘Losing the war on asylum crime’ (Daily Mail) and ‘Bombers are all sponging asylum seekers’ (Daily Express) are examined. Pupils are given the opportunity to reflect on the impact of such media bombardment and the wider repercussions they may have. In both cases, they are equipped with facts about the issues they are looking at. The booklet accompanying the DVD on Islamophobia, for example, explains that ’36 per cent of media headlines about British Muslims overall are about terrorism’, or that the most common words used to describe Muslims in the media are ‘terrorist’, Islamist’, ‘Militant’ and so on. The resource on asylum seekers, meanwhile, has a powerful section on the reality of asylum seekers’ housing conditions in the UK and the restrictions that can be placed on residents’ movements.

‘Myth busting’, of course, is not an end in itself. Tackling a myth does not necessarily alter the context within which myths and particular ideas gain currency. And racism, as SRtRC makes clear, cannot be reduced to the outcome of the construction of a particular set of media narratives. But SRtRC’s resources are useful in the way they go beyond this, encouraging pupils to think about the realities of racism in the UK, and its impacts. In ‘Out of Site’, the resource on Gypsies, Roma and Travellers, a letter by Nellie Delaney is featured, describing the backdrop to the death of her 15-year-old brother, Johnny, in 2003. Johnny Delaney was killed by a group of teenagers, one of whom was heard to say ‘He deserved it, he was only a f*****g Gypsy’. After reading the letter, pupils are encouraged to write one of their own in response to Nellie, outlining ways in which they would try prevent such an attack happening again. This is part of a central message in all of SRtRC’s exercises: that pupils can have a role in resisting racism and challenging the country that they live in.

Could this go further? Without doubt. When discussing how racism is shaped, materials could, for instance, help pupils to think also about the role of policies, laws and institutional groupings such as the criminal justice system. (After Johnny Delaney was killed, for example, it is worth bearing in mind the anguish that the judge in the trial caused when he denied that racism was an element in his death.) But what these resources do is create an environment where pupils can begin to ask and reflect on these critical questions. In doing so, they are valuable tools.

Teachers and head teachers turn a blind eye to bullying, it’s a fact!! Even if there is an anti-bullying policy it doesn’t mean they’ll act upon it when they see a pupil being bullied. Schools do NOT tackle bullying by ejecting the bullies themselves but will gladly sweep the problem out of sight in case it blots their Ofsted rating which has become more important now than the education and well being of the pupil. Bullying is unacceptable. The bullies should be targeted, not the victims.Just watch ‘Educating Yorkshire’ to see how senior staff tiptoe round the bullies trying not to offend them. Also a general point – there are many teachers these days with a strange psychological need to interact with the trouble makers and retain them within their schools. They tell everyone how caring they are for keeping the badly-behaved in their schools, when in fact they are keeping a bad person who is causing misery and stress and anxiety to the other children. Not so caring after all, as they keep claiming they are. Teachers are supposed to protect your children, not indulge the bullies and allow them to reign in schools. The statistics for bullying are damming as are the statistics for the quality of education in this country…………ever down we go………….where is the bottom of the pit? This is what I hate about schools in general. Many of them turn a blind eye to bullying. If they do catch a kid bullying another kid, they either do nothing at all or give the bully a slap on the wrist. What’s worse is that kids are now turning to Facebook and other social media to continue the bullying outside the classroom. So actually, even a kid who transfers to another school can easily be bullied by the same kids they tried to get away from. When will schools listen to people and understand that bullying is serious?

According to a mixed race person, I did some research last week about bullying in Germany. In Germany, the figure is 1 in 6; in the UK, the figure is 4 in 6. This reflects the 2007 European crime statistics – 5 times more violent crime in the UK than in Germany, even though the UK has only 3/4 of the population of Germany. What is it that makes people in the UK so vicious? I was bullied for the first 2 years of secondary school for having a German mother. I had further problems with the English when I studied in Manchester and worked in London. I get on well with people all around the world, just not with the English it seems. I went to school in Wales, no Welsh-speaker bullied me, just the English ones. In all my 18 or so years in Germany, I’ve not had one adverse remark about my origins. Why are the British so aggressive? “But Russell Hobby, of the National Association of Head Teachers, said: ¿Schools have robust anti-bullying policies and treat all reports seriously. ‘However, there can be a gap between incidences of actual bullying and perceptions that it is taking place.¿” Translation – we can’t be bothered to deal with it, we will pretend it’s the victims fault for not “fitting in” and we won’t jeopardise our OFSTED standings by admitting there is a problem and it’s rife.

Bullies are weak and ineffectual people, they bully because they are cowards but want to be seen as clever. If only their poor victims, who are usually much, much nicer people could stand up to these senseless morons, but because they are nice people, they fell intimidated by them instead. It’s a vicious circle. Schools are useless in helping to tackle it because they are not allowed to punish these pupils, plus, I think they themselves are afraid of the backlash from the bullies parents, what a stupid situation. Something has to be done, but I doubt it will be. One of the main causes of bullying is the ‘inclusion policy’. This is the policy followed in recent years whereby those types who used to be expelled are now kept in mainstream. Note how in fly on the wall documentaries about schools the senior staff go out of their way to keep the bad ones in their school. And they would never ever use the term ‘bad ones’. In fact some of them shed a tear when one of the bad ones is at last expelled after 100 warnings (which must be a great relief to the other children, especially the bullied ones). These types end up in senior management and as head teachers. Shame on all those teachers who support inclusion. Teachers strike readily over pay, but never over inclusion or indiscipline. And their unions fully support inclusion and of course they also fully supported banning of the cane for bullies.
IA
London School of Islamics Trust

Sunderland fans who campaigned against the appointment of Di Canio last year know that when a real struggle against fascism and racism takes place SRTRC run away. SRTRC were intent on publishing a poster with Di Canio in it but were saved when he was sacked.