‘Pushed back’, the new report by migrant and refugee rights group ProAsyl, exposes the systematic abuses and human rights violations of the Greek border control regime.

Greece’s abject failure to comply with international and European legal standards regarding the treatment of asylum seekers and refugees is a well-known and well-documented issue in the EU. However, in recent months, Greece’s failed asylum system has to some extent slipped down the agenda in the European migration debate. Recently, the horrendous death-toll of migrants trying to reach Italy by boat, and the deteriorating conditions for asylum seekers from Syria in Bulgaria have been exposed. Greece, in the meantime, has unveiled a new asylum processing unit in Athens, and publicly assured all that it has developed a system that will cope with arrivals of asylum seekers.

According to the testimony of the ninety asylum seekers interviewed by ProAsyl researchers, however, the Greek border authorities have developed another systematic response to the arrival of asylum seekers from countries such as Syria, Somalia, Afghanistan and Eritrea: their illegal, unregistered detention, followed by collective expulsion from the territory without being given the opportunity to request international protection, or to challenge their removal. ‘Pushback operations’ is the name given to the practice of intercepting migrants once they have reached European soil or waters, and forcing them back across the border, without any consideration of their needs, or regard for their safety. The practice was condemned by the European Court of Human Rights (ECtHR) in 2012 in the case of Hirsi Jamaa & others v. Italy, but this is what the Greek border authorities are now doing, according to ProAsyl.

The manner in which these expulsions are carried out, in many cases leaving men, women and children adrift in boats, with no lifejackets, engines or oars, in Turkish waters, seriously endangers the asylum seekers’ lives. Many also report that they were beaten, mistreated and robbed of their possessions by Greek officials before being pushed back. The accounts of this treatment at times make for difficult reading, shocking even for those of us who know something about the situation in Greece. 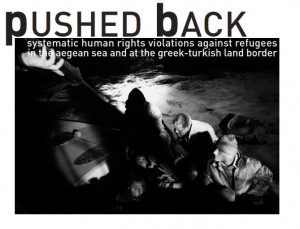 Beyond accusing the Greek authorities of these crimes, the report raises the question of European complicity in Greek treatment of refugees. The majority of the push-backs described in the report took place in areas where the European Border Agency, Frontex, is in operation, and continues to operate despite evidence of persistent and serious violations. Furthermore, much of Greece’s national border control regime is paid for by EU funds; an investigation is urgently needed into whether EU resources have been used to finance illegal activities. EU member states have put enormous pressure on Greece to shut down its border, and have shown little interest in making sure that this is not done at the price of people’s safety.

The testimonies in the report tell of a practice that is much more widespread than the Greek government, which continues to deny any knowledge of push backs, would have us believe. ProAsyl estimates, from the asylum seekers’ descriptions of the groups that they travelled in, that 2,000 people have been illegally pushed back in the last year from Greek shores.

The report also backs up previous research on the topic, including Amnesty International’s July 2013 report on Greek border practices, in which eighty more asylum seekers tell of being pushed back from Greek territory. As the evidence grows of the systematic nature of the use of push backs from Greece, the failure to react and investigate is revealing of the EU and its member states’ true priorities in managing refugee flows. Its actions, or failure to act, stand in sharp contrast to its public declarations of support for causes such as the Syrian refugee crisis.

ProAsyl’s report exposes in the most poignant terms the brutality at Europe’s south-eastern border, bringing to the fore the voices of ninety people who have experienced it first-hand. Despite the dangers, some of the asylum seekers have been pushed back from Greece more than once, and many more are sure to keep on attempting the crossing, hoping to find a place of sanctuary from war, persecution and poverty. There is no legal, safe way for an asylum seeker from Syria or Afghanistan to access protection in the EU. Instead, they are forced to take these incredibly risky journeys, enriching smugglers along the way. That when they arrive they are subjected to further abuses and put back into danger should be intolerable to the EU and its population.

This is not the first time that ProAsyl has exposed the abuses of the Greek border regime. Indeed, it was another report by ProAsyl, in 2007, ‘The truth may be bitter, but it must be told’, which was among the first to document comprehensively the horrendous conditions to which asylum seekers were subjected in Greece. That report was then cited as evidence in a subsequent ECtHR case condemning Greece in 2011. This case, M.S.S v. Greece, which was swiftly followed by the Court of Justice of the EU in N.S. v. UK, led to the suspension of returns of asylum seekers from other EU member states to Greece under the Dublin II Regulation, as conditions in the country breached Article 3 of the European Convention on Human Rights, constituting cruel or inhuman treatment.

Six years on from the publication of that report, ProAsyl has once again sounded an urgent warning to the Greek government and EU institutions. Let us hope the deterioration that we have seen in public attitudes towards migration will not paralyse national and European leaders from taking a stand against this illegal behaviour.