Stop feeding the beast! A review of ‘My Country: A work in progress’ 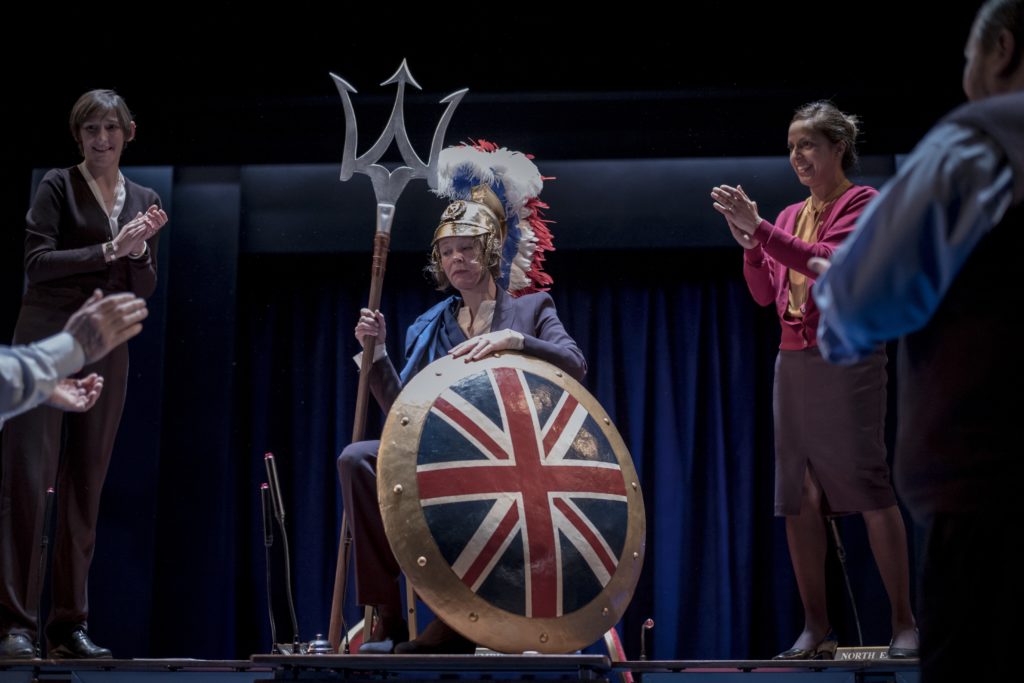 A play built around seventy long interviews with ‘leavers’ and ‘remainers’ about their feelings after the Brexit vote, inadvertently, provides insights into the immigration debate.

The liberal consensus on immigration has broken down. That’s what Brexit has taught us, or at least that’s what the establishment tells us that Brexit has taught us. The Conservative leadership risk no crisis of confidence within its ranks when it comes to pandering to anti-immigration sentiment – the nastier, the more hard-line, the better its coverage in the Daily Mail and the Sun. But for Labour, and its trade union affiliates, freedom of movement, immigration and Brexit have emerged as sources of internal strife. Doom-merchants warn there is no way of reconciling the views of middle- and working-class Labour voters, predicting also, prior to the Copeland and Stoke-on-Trent by-elections, that Labour faced electoral Armageddon in the North of England, had it opposed the triggering of Article 50. On the one side, Diane Abbott (‘fair rules and reasonable migration’), on the other, Stephen Kinnock (‘skills-based managed migration’ linked to work permits). On one side, Unite’s current leader Len McCluskey (unionisation of migrant workers, sectoral collective bargaining to challenge wage undercutting), on the other, Unite contender and anti-immigration hardliner Gerard Coyne (May’s not tough enough on border controls, free movement must come to an end).

I set off to see the verbatim, post-Brexit drama My country: a work in progress, directed by the National Theatre’s Rufus Norris and co-authored with poet Carol Ann Duffy, the hateful, divisive din of the immigration debate echoing in my head.

The Guardian, had, after all, billed this as a production with a mission to ‘understand the roots’ of the Brexit ‘divide that has fractured the country’. And as mobile phones were turned off and lights dimmed, the audience was asked to heed ‘Silence loosening/within the sacrament of listening’.

An affectionate portrayal of the British

There were no stage curtains separating the audience from the play’s setting. We were the ‘witnesses’, the ‘listeners’ part of the referendum drama in what could be a municipal town hall anywhere in the UK, unchanging for decades, old tables and chairs, a bright blue carpet and yellow ballot boxes. Britannia, played by Penny Laden, has invited representatives of six regions of the UK – Caledonia, the North East, Northern Ireland, Cymru, the East Midlands and the South West – to a special meeting in an attempt to understand the opinions of the people of her lands. So the actors, carrying pictures of the interviewees whose words they speak, start to discuss and argue with each other, their views interwoven with that of Britannia herself, representing the point of view of politicians (with a pretty brilliant rendition by Laden of both Boris Johnson and Nigel Farage). The play, despite the resentment and grievance of the spoken word within its text, proceeds through humour.

It is essentially an affectionate portrait of the British, redolent of the fond national stereotypes in the stock jokes about the Englishman, Irishman, Scotsman and Welshman. The pre-publicity may have emphasised the challenging nature of My country: a work in progress, but the play sits easily in the comfort-zone of majority Brits. Those who have been at the butt-end of post-Brexit ‘outsider’ racism may well find its evocation of the essentially generous nature of our island people grating.

What’s most interesting about the language of the verbatim is its tone. The main theme that emerges from the seventy people interviewed is ‘unfairness’. There’s the familiar moan (accompanied by a few laughs) about the EU dictating the shape of bananas, and the amount of green in mushy peas (idiotic rules) but the sense of unfairness becomes more intense when the discussion shifts to welfare and social benefits (‘we work hard, they get benefits, we worked, worked hard, it didn’t fall into our laps’). But it is when the discussion turns to immigration and terrorism (ie Muslims) that the sense of grievance reaches fever pitch ‘(they don’t abide by the rules’, ‘we’re a soft target’, ‘if we speak out, we’re racist’). At this point, family Britannia looks on the way out; issues of immigration and integration are tearing the nation apart. Yet, because the script takes us to anti-immigration grievances via a range of other grievances (the EU, work, redundancy, welfare), and because the framework in which these grievances are expressed mirrors that of the tabloid press, you come away feeling that the worst thing we could possibly do is be intimidated by the mainstream narrative that the liberal consensus on immigration has been irretrievably lost. Kowtowing to anti-immigration arguments, simply feeds the beast.

A sense of loss

There are also moments in My country where the words sound like a lament – memorable moments spoken in a softer, less resentful and more lyrical, regional idiom are powerful and evocative. Just as ‘unfairness’ is a central theme, so too is ‘loss’: loss of the land, loss of the status that comes with secure employment (‘ I was like, I’m a police ofﬁcer.’ ‘Now I’m nothin. I’m nothin’), loss of human dignity which comes with redundancy or poor health (‘they’ve been finished’, ‘they’re treat like second-class citizens when they paid tax all their lives’). And a general loss of meaning which comes when industries die and a thriving local culture linked to that industry dies with it, so that ‘even the football club’s disbanded and the rugby club’s moved’, and the ‘kids have tae move – they move to America, Canada, J-Japan, London. Any-fuckinwhere’.

One interviewee, the son of a tenant farmer, evokes a way of life now eroded as farms are taken over by big business. When you can no longer go ‘shepherding every day’, the ‘sheep’, who used to know you, are simply ‘astonished when you arrive’. Another interviewee from Fife, points out that one ‘ industry used to employ the whole village. And that industry died. So that whole village now doesnae have a main industry’. Once again, a door opens to a wider perspective – one in which immigration is merely a sign that stands in for something else, namely the indignities and dislocations that arise with the end of an era that promised full employment. Addressing the loss of meaning that ordinary people have experienced as their workplaces have been destroyed, and the dislocation of neighbourhoods and communities, that have been abandoned by successive governments, now that certainly is ‘a work in progress’.

My Country: A Work in Progress is now touring the country. For listings see: