Statement of solidarity from Relatives for Justice 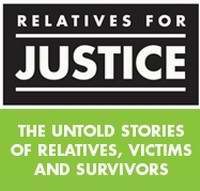 Below, we reproduce a statement from Relatives for Justice, a support group for those bereaved and injured in the conflict in the North of Ireland, in solidarity with Mark Duggan’s family and their fight for justice after the recent inquest verdict.

As the verdict from the inquest into the killing of Mark Duggan began to emerge it was an all too familiar pattern for those of us in Ireland following these events.

People in Ireland could relate to and empathise with the feelings, frustrations and emotions of the Duggan family and their community. They felt their pain and families here likely relived their own personal and very similar experiences of injustice in those moments when the Duggan family spoke outside the court. Sadly they too had been there – they once stood in those shoes. Families watching in living rooms that also hold mementos and pictures of loved ones taken from them in similar circumstances. It was all too familiar. It was all humanly painful.

During four decades of political conflict members of the police and British Army killed 367 people in Ireland. Like Mark Duggan the vast majority were unarmed and included scores of children and women. A shoot-to-kill policy existed in the North of Ireland and almost exclusively all of these killings were visited against one section of the community. A community vilified and denied its rights.

The usual accompanying lies were: ‘we were fired upon and returned fire’; ‘there was a gun but others removed it from the scene’; ‘I thought there was a gun’; ‘the person made a sudden movement’; ‘they turned as though they were about to shoot’; ‘there was a hostile crowd’. In countless cases these statements were found to be untrue yet there were only ever a handful of prosecutions – poorly prosecuted it must be added and where acquittal was more frequent than prosecution. Those sentenced were then quickly released after right-wing establishment campaigns.

The standard practice after such killings was that the police and military would issue public statements and brief the media, often while the dead body was still at the scene of the shooting. Such misinformation became the initial story forming the first link in a sequence of perfunctory measures throughout the criminal justice system that, when concluded, equated to impunity. And that is the journey families relate to as they watch and listen to the Duggan family.

Truth always became the first casualty. Attempts to deter witnesses and the changing of their statements occurred regularly. Harassment too – of witnesses, bereaved families and those organising and campaigning for justice – even lawyers representing families were threatened. Two of our brightest and most successful lawyers were assassinated by the State using loyalists as proxies. David Cameron has acknowledged this with regard to state collusion in the killing of Pat Finucane.

The parallels are striking to say the least.

I have often said that when a community is vilified and described in certain terms, subjugated in many ways, then it creates a subtext where the rights of that community and its people are then also dismissed. In this context all sorts of abuses by those in authority take root and can even flourish. What would be unacceptable police behaviour in other mainstream white middle-class areas appears acceptable in Black, Asian, Muslim and other minority ethnic communities in Britain. Even more disturbing is that when these abuses occur the accountability and due process necessary in curbing such activity is found wanting. And this merely exacerbates the entire situation. It adds insult to injury.

Many questions remain unanswered concerning the shooting of Mark Duggan. And even if – even if – Mark Duggan was armed, the penalty for possession of a firearm is not summary execution.

The Independent Police Complaints Commission (IPCC) lacks the statutory and legislative powers required when such killings and other serious abuses occur.  In the North of Ireland we now have a statutory body in the Office of Police Ombudsman that has, when the will of the office bearer is to do the right thing, sufficient powers. This could be a template from which people in England could examine and learn in terms of police abuses and violations.

We were also a community vilified, marginalised economically, politically vetted, censored and criminalised, of which there remains a legacy yet to be resolved. We were wronged and we were right to make a stand for truth and justice and so are you. Campaigns for truth and justice here remain, and have with the passage of time grown stronger in recent years.

But like the community Mark Duggan came from we are a proud and determined people, despite what was visited against us – we persevered with great pride, self-reliance, and dignity and our resolve kept us going. Moreover, like you, right was and remains on our side.

Recently we watched as the relatives and survivors of the Kenyan Mau Mau sought justice against State abuses. We took comfort from that as we continue to struggle for justice. There is hope. Truth will out if people speak out. As citizens and democrats we all have a responsibility to speak out and act accordingly when wrong is perpetrated.

The case of Mark Duggan must not be seen in isolation to other such abuses by police in Britain, for to do so would lend to a continuing culture of abuse by those in authority. We note that the Duggan family rightly referenced other such deaths including of those who died in police custody. Organise, campaign, build and show solidarity – together you are stronger and more effective. Importantly, your efforts can help prevent other families suffering a similar fate and that’s the best legacy in memory of Mark Duggan.

Our thoughts, support and solidarity are with you.