Spinning the death of Sheku Bayoh

Following the death of Sheku Bayoh last month, police used the decades-old tactic of attacking a victim’s character in a suspicious custody death.

On 3 May 2015, Sheku Bayoh, a gas engineer from Sierra Leone, died on the street in Kirkcaldy, Fife. He had been restrained by up to nine police officers responding to an alleged report from a member of the public of a man seen wielding a weapon. Pathologists suspect that he died from ‘positional asphyxia’, a cause of death following restraint in a number of previous cases.

The grief of Bayoh’s mother, Aminata, and partner, Collette Bell, has been compounded by police statements that have raised more questions than they have answered about the circumstances of the death. Bayoh’s family was initially told that police were hunting two men suspected of involvement in his death. Police officers then repeatedly changed their story. They had been responding to a witness who had seen a man walking down the road carrying a weapon, they said. First Bayoh was wielding a machete, next it was a knife, then a ‘blade’; then a woman police officer had been stabbed, next she had not been, but had been hospitalised nonetheless.[1] Bayoh’s partner, Collette Bell, spoke to the press: ‘The people we put our trust into to protect us has changed their stories too much in such a short time!’

Over the weeks, another account emerged. After being beaten with batons and sprayed with both CS spray and PAVA pepper spray,[2] Bayoh was taken to hospital, still in handcuffs,[3] where he died. While pathologists were told of the use of sprays – known to have caused death in a number of other cases – a preliminary post-mortem report (hastily conducted despite the family asking for it to be delayed) failed to mention their use.[4]

In a series of statements, the Scottish Police Federation (SPF) and its legal representatives responded to the family’s concerns, relying on unsubstantiated claims about the character of the deceased. On 14 May 2015, Bayoh’s family, along with their solicitor Aamer Anwar, held a press conference to ask why officers involved in Bayoh’s death had not been suspended from duty, or given statements to the ombudsman, the Police Investigations & Review Commissioner (PIRC), which was conducting an investigation. Within minutes of the conference ending, Brian Docherty, chairman of the SPF, accused the family and its legal representative of making ‘unhelpful comments to the press … innuendo and speculation [which] adds nothing other than to the pain and grief of the family’.[5]

The SPF stressed that Bayoh’s restraint by officers was in response to a ‘violent and unprovoked attack by a large male’ upon a ‘petite female officer’ who ‘believed she was going to die’. The SPF’s legal adviser, Professor Peter Watson, later reiterated the point:

I would ask the media and public to remember that a petite female police officer was chased and then subjected to a violent and unprovoked attack by a very large man who punched, kicked and stamped on her. The officer believed she was about to be murdered and I can say that but for the intervention of the other officers that was the likely outcome.[6]

Here was the first indication of the extent of the alleged attack on the police officer, its potency relying on comparisons between the disparate sizes and strengths of attacker and attacked, and an emphasis on the sincerity of the officer’s fears. The full facts aren’t yet known but the police’s ‘defence’ bears a worrying resemblance to the way that other black people who have died in custody have been painted as possessed by violence, with a degree of strength that makes necessary the use of extreme force by officers. The violence meted out against Joy Gardner, for instance, who died in Tottenham in 1993 after police officers wrapped thirteen feet of tape around her nose and mouth, was justified on the basis that she was a ‘strong and violent woman’ who ‘might be HIV positive’.[7] Shiji Lapite, a Nigerian asylum seeker whose body was covered in forty-five separate injuries after his death in Stoke Newington, was described by one of the officers who detained him as ‘the biggest, strongest most violent black man’ he’d ever seen, despite his five foot ten build.[8] Again in Tottenham in 1999, the use of force against Roger Sylvester, who had been suffering from a mental health episode, was put down to his ‘exceptional strength’ and allegations that he was a ‘crack user’.[9]

Undermining the campaign for truth 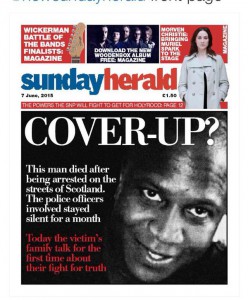 As the Justice for Sheku Bayoh campaign garnered media sympathy, the SPF reoriented its focus onto the family of the deceased. On 18 May, solicitors from PBW Law, SPF’s legal representative, threatened action on behalf of the officers involved in Bayoh’s death against what they described as ‘criminal’ posts naming the officer he had allegedly attacked on a Facebook page set up as a tribute to his memory. For Bayoh’s mother, Aminata, the threat constituted an attempt to ‘silence a grieving mother’.[10] Two weeks later, the company claimed that Anwar, the family’s solicitor, had directed ‘hyperbolic, inaccurate and bizarre rhetoric at the Scottish Police Federation’, before accusing him of failing to allow ‘the investigation to proceed without interference’.[11]

Yet the interventions of the Scottish Police Federation raise doubts about its own assistance of the investigation process. Its claim, that the PIRC had failed to ask the officers for a statement until almost a month after the incident, appears contentious. The PIRC has claimed it made repeated attempts to gain interviews,[12] but new guidelines issued in March by Police Scotland commanders have stripped the watchdog of the power to compel officers to hand over evidence if they could face criminal charges.

The SPF states that it is ‘saddened’ that Bayoh’s ‘legal representatives are inferring police officers should not have the same legal protections as any other member of the public’.[13] Yet the opposite was the case. The officers involved in Bayoh’s death remained on duty able to confer for a month before providing statements to the PIRC. Allegations that an officer was hospitalised as the result of a violent attack have yet to be substantiated. So too the claim that Bayoh was wielding some kind of blade. This type of assertion has historical precedent in other spectral weapons used to justify the use of deadly force: the table-leg-cum-shotgun of Harry Stanley (1999), the pistol-shaped lighter of Derek Bennett (2001) and the gun ‘raised’ at a police marksman – recovered four metres away and behind a wall – that haunted Mark Duggan’s reputation after his death.

Read ‘The defamation of Joy Gardner’ in Dying for Justice