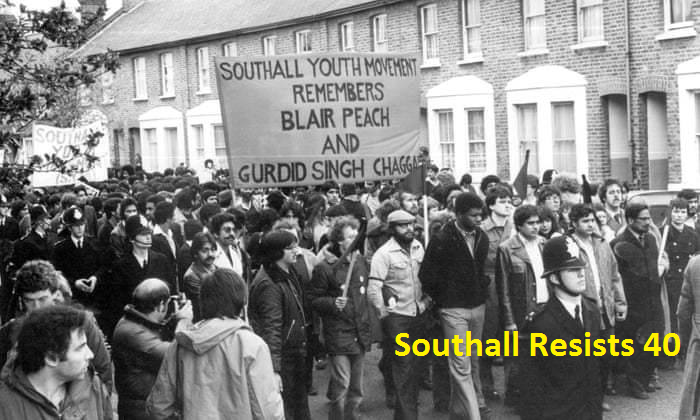 A Southall resident describes the community activities in Southall Resists 40, remembering the death of anti-fascist Blair Peach in 1979 and the historic opposition to racism and fascism in Southall.

23 April is mainly seen as England’s national St George’s Day. But, that day also stands out as a moment in British history when nationalist sentiment was supplemented with state racism and police brutality of the deadliest kind. Tuesday 23 April 2019 will mark forty years since the murder of teacher and anti-racist activist, Blair Peach. Peach’s death in 1979 was a consequence of a ruthless display of police violence against Southall’s predominantly South Asian community, with whom Peach was protesting in solidarity against the National Front’s unwanted and provocative presence in the town. It is with a commitment to honouring this salient milestone in British anti-racism, as well as remembering Southall’s wider history of grassroots anti-racist resilience, that Southall Resists 40 (SR40) was formed. 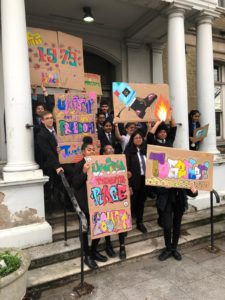 SR40 is a coordinating group comprised of local residents, organisations, activists and artists. Underpinning the project is the collective view that remembering the aggressive policing of Southall’s black and Asian community, and of the wider contingent of anti-fascist protesters, in April 1979 is imperative, not least because Peach’s murder remains ‘unfinished business’ – no police officer was held to account for it. SR40 also represents a collective effort to relate the pivotal moment of 1979 to Southall’s broader history of racist violence and anti-racist resistance, which includes the racially-motivated murder of Gurdip S. Chaggar in 1976, and the community’s successful efforts to defend the town from fascist intruders in 1981. The project also recognises the significance of Southall’s anti-racist history for ongoing struggles against state racism and far-right fascism. That is, SR40 remembers not for the sake of remembering, but rather to draw inspiration from the past for the anti-racist challenges facing us today.

In practical terms, SR40 serves as a hub for various projects to work together, support one another and use creativity as a political tool for learning about past anti-racist struggles to mobilise in the present. Some initiatives already underway include the Southall Rising Arts Project, to make the monumental events of 1976, 1979 and 1981 a point of sustained classroom discussion — decolonising the curriculum in action. The project has involved community members working with local primary and secondary schools throughout the year, with students learning about the struggles of Southall’s black and Asian working-class community through art and creative writing. Some of the artwork is, appropriately, on display at the Southall Town Hall. Complementing this, the history walks initiative traces the gradual development of Southall into a proud symbol of multicultural conviviality, while also covering sites like the Dominion Centre, where racist violence and community fightbacks underpinning that development took place. 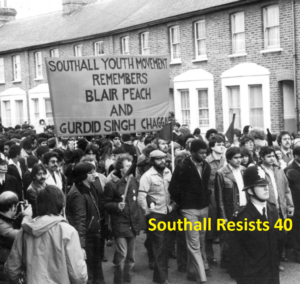 Upcoming events that will recall Southall’s past anti-racist struggles, while also organising for the present, include ‘An Evening of Culture and Resistance’ on Friday 12 April 2019, which will involve poetry, music and film; a plaque ceremony and vigil in honour of Blair Peach and Gurdip S. Chaggar on Tuesday 23 April 2019; a procession on Saturday 27 April 2019; and a symposium on fighting fascism on the following day at Birkbeck, University of London. Each initiative is special in its own way and makes a unique contribution to the collective endeavour of acknowledging not only Southall’s anti-racist past, but also how it speaks to the now.

Hopefully, the momentum generated from these grassroots projects can be built upon beyond April 2019. The community victory that put paid to the far Right ever stepping foot in the town again, is a proud legacy to remember in radical history, but SR40 suggests how that tradition can be carried forward beyond Southall too. 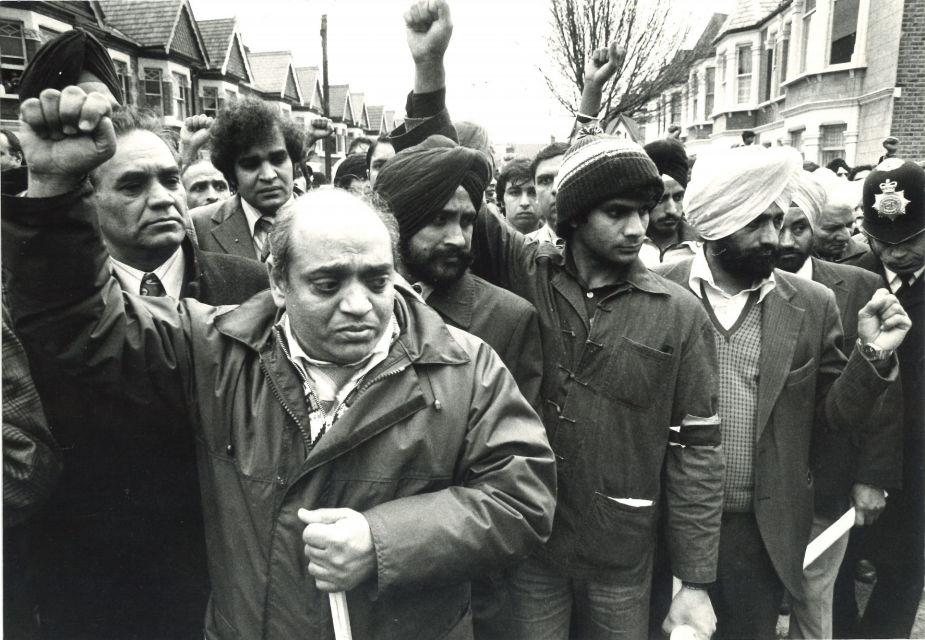 Blair Peach memorial march following his death on 28th April 1979. Protesters look towards to spot where Blair Peach was killed.

12 April: An evening of culture and resistance (6.30pm, at Tudor Rose Club, Southall)

28 April: Conference on How to fight fascists and win, (1-5.30pm, Birkbeck, University of London)