Sewell, stigma and the policing of race 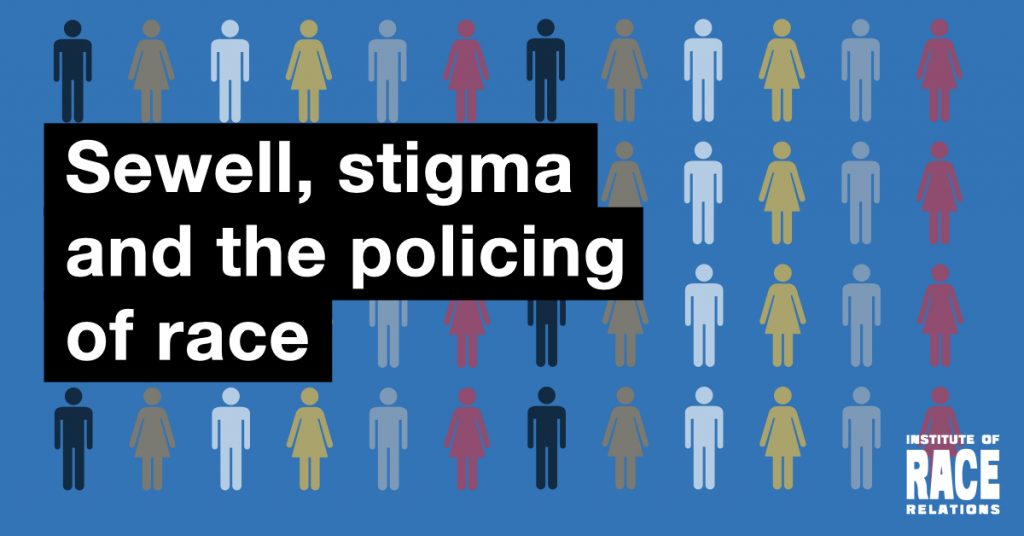 Whilst many agree with the Commission on Race and Ethnic Disparities report’s recommendation to disaggregate the term ‘BAME’, IRR Director Liz Fekete warns that this is designed to create a new set of norms about how race and racism are conceptualised – and to disappear the matter of structural racism.

Enough has been said by others about the ideological approach, farcical methodology and flawed conclusions of the Commission on Race and Ethnic Disparities report (CRED), never mind the process itself, which has been ridiculed by so many supposed consultees. But irrespective of whether Boris Johnson accepts all its recommendations, the CRED report has already served its post-Brexit ‘anti-woke’ purpose. It ensures that the pre-Brexit stance of British exceptionalism, the focus on our unique and glorious island story, will roll on and on like the proverbial stone that gathers no moss. And at the same time as appeasing the ‘patriotic instincts’ of its white working-class supporters in northern constituencies, the report tells Black and minority ethnic communities that they too should fly the Union flag with pride, as the UK is the diversity model for ‘white majority countries’ across the world.

Yet, even though it is by now quite clear that the whole CRED process lacks credibility, this does not mean that there won’t be implications – particularly in the area of research. For if its recommendations are accepted, research into structural racism could become virtually impossible for those in receipt of public funds: in the civil service, university and aligned Third Sector research. One recommendation that the government has already indicated it will accept is the abolition in data collection of the concept and terms BAME or BME.[i] (This is ironic given that the terms were advanced by the 1980s Tory government to promote ethnicity so as to undermine cross-racial solidarity against racism.)

While these are far from perfect categories, and alternative terms are used by communities to express solidarity with each other and explore common ground, as a limited statistical research tool they have been useful to identify and analyse common patterns of discrimination across ethnic groups in service delivery, or discriminatory policing such as stop and search. In relation to the latter, the Sewell report is quite emphatic that disproportionality in stop and search has nothing to do with discrimination or structural matters, but everything to do with criminality in young people from specific ethnic minority communities.[ii] CRED’s recommendations, which include calls for all those in receipt of public funds to adopt a new set of ethnic data categorisations,[iii] as well as to follow its rigid framework for distinguishing racial disparities from racism,[iv] seem set to insulate the government from any potential criticism on policy. A government that has set itself up as defender of academic freedom and free speech on campus, is being urged in a report, commissioned by the prime minister himself to control funding of university research in line with a particular ideological view of how race should be conceptualised.

Ultimately, what we at the IRR fear is that such disaggregated, ethnic-specific data will be used to create a kind of league table of good and bad, successful and failing groups. A variation of the ‘good migrant’ ‘bad migrant’ scenario. A kind of stigmatisation via comparison. Sewell, the chair of the commission, has form here – and we already see this in his report, contrasting good parenting techniques and enterprising family structures in the Black African community with family dysfunction or breakdown in other communities, most notably the Black Caribbean.

A version of this article was originally published by Byline Times, 9 April 2021.

[i] Commission on Race and Ethnic Disparities: Report, p51.