Screwed by the system 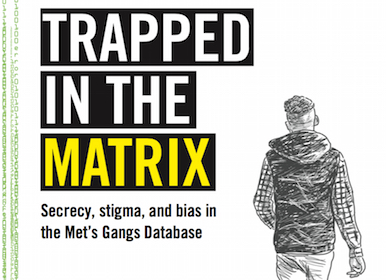 Lord Herman Ouseley writes for IRR News on the findings of a recent Amnesty International report on the Gangs Matrix. 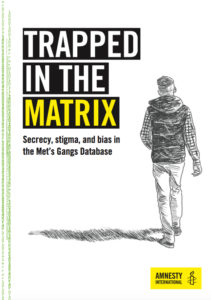 By October 2017, there were 3,806 individuals on the Gangs Matrix, 87 per cent of whom were Black, Asian and of a minority ethnic background, 78 per cent of whom were black. Amnesty International spent the past year researching this Matrix and found that the database was compiled based on a vague and ill-defined concept of what is a gang. Forty per cent of those on the list had no record of being involved in any violent offence in the previous two years and 35 per cent never had a serious offence attached to their name.

The system simply defines you as a gang member if you are young, (as young as 12 years old), you are male (99 per cent) and if you are black. It is part of a tried and tested formula for stigmatising and ruining the lives of young, black men. The system utilised the previous Vagrancy Act to treat young black men as suspected persons and picked them off the street; the notoriously used stop and search tactics were part of the same process and still play a part in the racialised profiling and criminalising of young black men; the rounding up of groups of young people and using the joint enterprise doctrine to criminalise those who have not actually committed a crime; and now the gangs matrix takes it a stage further. It uses the data collected about each person on the list across the entirety of the system to share with the other social agencies such as the CPS, criminal justice authorities, housing, education, immigration, employers, social services etc. If you are on the Gangs Matrix, your life is blighted, because you are defined as a gang member and stigmatised as a person whose card is marked. You surely are on a blacklist!

As with the Windrush fiasco, the system, which is the network of power, prejudice and decision makers, determines the processes to apply to achieve the outcomes which are most detrimental to the intended beneficiaries. In the case of Windrush, it is all about the hostile environment, now a compliant one, which presumes guilt and determines who is guilty without any reasonable consideration for fact or evidence. The Gangs Matrix is underpinned by institutional racism. It may have been well intentioned but the collective actions are discriminatory. 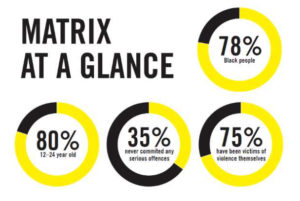 The Amnesty International 53-page report could be a watershed moment to expose these unaccountable activities which infringe on human rights, have a discriminatory impact, are approved by those at the highest levels of society and all done with the clear expectation of being able to get away with it. Amnesty International must be supported in their call for the disbandment of this arrangement and for an urgent independent investigation into the whole damn system!

IRR News: JENGbA responds to the Amnesty International report on the Gangs Matrix