Scottish councillors join in condemnation of Gypsies and Travellers 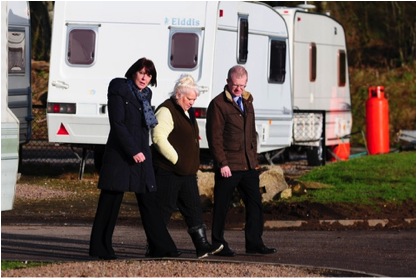 Community councillors in Scotland have accused Gypsies and Travellers of self-segregation, claiming that the younger generations have a ‘chip on their shoulder’.

Since September 2011, Members of Scottish Parliament (MSPs) have been conducting ongoing inquiries into the ‘reality of Gypsy/Traveller lives’ as part of the Scottish Parliament’s Equal Opportunities Committee. Starting from the position that the locations of Gypsy and Traveller sites are often crucial, the Committee has collected evidence from Gypsies and Travellers, NGOs, public bodies and local authorities. Their findings have so far been shocking.

Scotland’s Gypsies and Travellers face persecution at every point of contact with the wider population. And so it must have come as something of a slap in their face when five community councillors, from Mid Argyll, Aberdeen, Perthshire, East Lothian and South Ayreshire, seemed to be telling the Committee that part of the problem is down to their unwillingness to interact with local settled communities. Speaking of a footpath surrounding a site in Perthshire, Christopher Ahern, Chairman of North Muirton Community Council, told MSPs that ‘when [Travellers] are there, nobody goes along it’.[1] A spokesperson from Lochgilphead Community Council told MSPs that Travellers ‘come in and they think that everything is owed to them … the younger ones have a big chip on their shoulders and play the Gypsy Traveller card’.[2]

A report of the Committee’s findings shows that young Gypsies and Travellers are right to feel aggrieved. It has found incidents of Gypsies and Travellers being denied access to a GP without explanation. Its survey of Scotland’s settled community found that over two thirds of respondents would condemn a relative for starting a relationship with a Gypsy or Traveller, and that such people are not to be trusted with the care of primary school-age children.[3] What else could be expected,the Committee has heard, when the region’s press portrays the community in a ‘disturbing’ light.[4]

On the back of such open hostility it is easy to see how the community councillors would have felt on safe ground in criticising Gypsies and Travellers themselves. But liaison teams from the Association of Scottish Police Superintendents, working with Gypsy and Traveller communities and attempting to urge local authorities to properly house them on official sites, have reported that community councillors have used ‘disturbing rhetoric’.

Amnesty International (AI) research, published last year to check on the progress of recommendations made by Scotland’s last Equal Opportunities Committee over a decade ago, was submitted to the Committee. It found that little headway had been made on accommodation needs – only nine of the country’s thirty-two local authorities had made use of good planning strategies. In 2010, Perth and Kinross Council vehemently rejected AI’s criticism over their ‘widespread failure to deliver on the recommendations in the [last Committee’s] report’.[5] Yet a representative of one of Perthshire’s community councils was among those which, last month, blamed Gypsies and Travellers for their own exclusion and poverty.

AI found two major obstacles to Gypsy and Traveller site development. Firstly, local opposition. One local authority told AI that ‘there is always a difficulty in agreeing a site which doesn’t offend someone’.[6] As has been documented, local opposition to sites in England and Wales has been given teeth by the Localism Act. (Read an IRR News story: ‘Localism, populism and the fight against sites‘.) Scotland has had similar planning legislation since 2007, which proponents have said allows communities a greater say in local planning decisions.[7]

Secondly, the severity of the budget cuts to local authorities is making funding for sites difficult to come by. According to one local authority spokesperson, ‘Costs to establish the standard of site as expected by the Scottish government and others, means a significant financial commitment both in terms of capital, and more relevantly in ongoing revenue.’

Respect, responsibility, tolerance, empathy surely must work both ways..non travellers and travellers…reason for self and reason for others right not just for themselves.

Hi my name is edith. Macgregor and iam wondering if you can help me iam looking for gypsy travlers photos from lochgilphead going back to1979