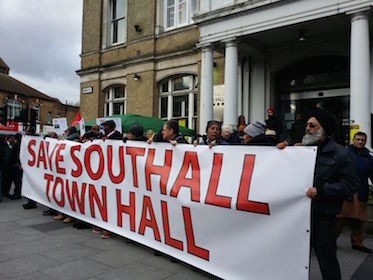 Long-time campaigner Suresh Grover reports from a demonstration at the weekend to save Southall Town Hall from development.

It was an extraordinary and historic event. In order to save Southall Town Hall, we gathered peacefully in our hundreds, occupied the main traffic junction and crossway adjacent to the town hall, and for the first time in the history of community and civil rights struggles in the UK, raised a community-designed people’s flag on the town hall flagpole. It is a radiant flag that says: Southall Not for Sale * United We Stand * We Shall Overcome and it is adorned with all the progressive political struggles. We organised the event without the help of the police and when we occupied the main square most of the drivers, despite suffering major inconvenience, supported the cause – some even left their cars and joined us for a few minutes. The flag is still flying because the council won’t be able to take it down.

It’s often said that if a community has no vision it will perish. That seems to be the fate of the town we live in. Rather than build on its dynamic history of pluralism and multiculturalism and fight austerity, the local Labour-controlled council – the London Borough of Ealing – is hell-bent on asset-stripping by selling public spaces and buildings. It has now sold the local town hall that is home to scores of community organisations and used by thousands of people every year. In the late 1970s it was occupied by the racist National Front for an evening as a gesture by racists of ‘taking back control’ and calling for open repatriation of black and brown people. We fought back and won. It has that iconic status, and selling it is like selling our own history. Not only have we lodged a legal action against the council’s decision, but we have also launched a powerful struggle against asset-stripping and austerity in London that has managed to unite different communities to retain and strengthen a secular identity and spaces in our locality.

Sign a 38 Degrees petition to Save Southall Town Hall