Safety or stigma? FGM safeguarding measures in the UK 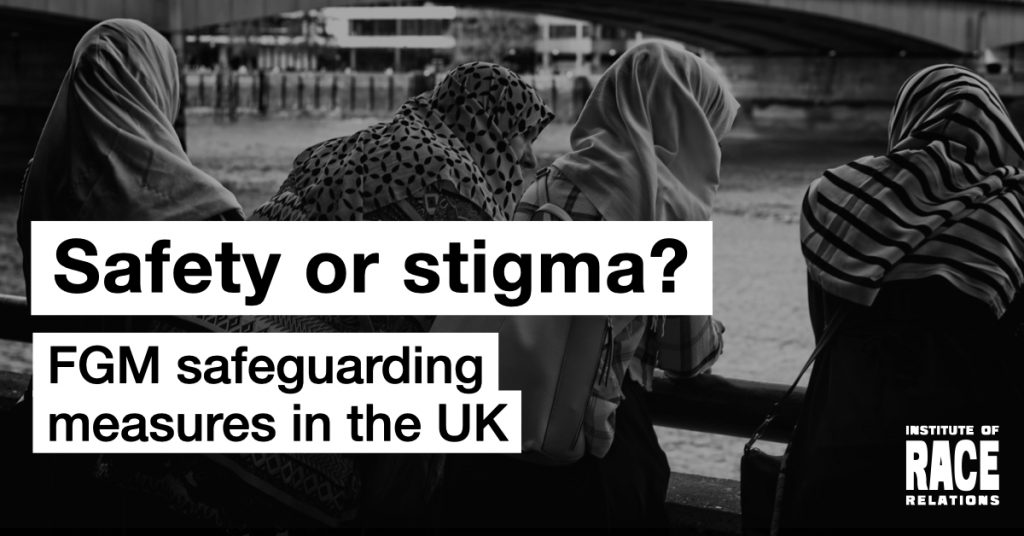 IRR News contributor Kaiisha Kukendra writes on the stigmatising impact of FGM safeguarding measures on Muslim families in the UK, who campaigners argue are being racially profiled, criminalised and over-policed.

Female Genital Mutilation (FGM) is a global human rights violation and severe form of gender-based violence against women and girls, itself a reflection of a deep-rooted patriarchal inequality. However, the framing of FGM as being an ‘African problem’ based on culture and tradition has led to the stigmatisation and racial profiling of ethnic minority communities in the global North.

Over the past decade, the anti-FGM movement in the UK has become institutionalised within statutory services including hospitals, schools and social services. This is despite evidence showing that FGM practices are diminishing with radical change brought by the efforts of community organising, alongside shifts in cultural attitudes due to migration. Most communities entirely denounce the practice and are committed to eradicating all forms of it, with many activists campaigning against FGM alongside honour killings and forced marriage, arguing that these issues should be targeted primarily as forms of violence, not culturally specific practices.

The increased awareness of FGM has led institutions and organisations to introduce various forms of safeguarding for young women and girls. What has been overlooked is the harm that can emanate from the safeguarding procedures themselves. Researchers and grassroots groups have done vital work revealing how Britain’s Somali communities are being stigmatised, racially profiled and over-policed by FGM safeguarding measures, causing damage to families and communities.

In the UK, the mandatory reporting duty for FGM requires health, social care professionals and teachers to report known cases of FGM in under-18-year-olds to the police. This policy also includes a mandatory recording duty, which requires the collection and recording of data on women of any age who have undergone FGM, including whether or not they have girl children.

The recording of women who have undergone FGM automatically defines them as a risk to their child, with the assumption being that it is intergenerational and that mothers are likely to carry out the same procedure on their children. What this ignores is that many of these women would have undergone FGM over 20-30 years ago (maybe longer) prior to migrating to the UK, often against their will, and are very unlikely to repeat such abuse on their children because of their own traumatic experiences. It is unclear how the data recording risk, which draws a very dubious connection between those who underwent FGM possibility repeating the same harm to their children, is being used to influence policy. What is clear is that the fact of the reporting and recording duty opens the door to misrepresentation and exaggeration of the prevalence of FGM, resulting in a general moral panic that, in turn, legitimises the surveillance and over-policing of Muslim communities.

An important question to ask is why the reporting duty is only mandatory for FGM and no other form of child abuse. If it is believed that such a duty ‘would offer greater protection to children’, separating it from other forms of child abuse is contradictory. Would it be fair for a therapist to record that a parent was sexually abused as a child, thus automatically categorising them as a risk to their own child’s safety? In fact, in July 2016, the government launched a consultation in order to review the possible reform of introducing mandatory reporting of child abuse and neglect, however, in March 2018 it decided against it, stating that the response raised a number of risks. No such consideration has been extended to FGM.

Researchers have shown that there is a worryingly large mismatch between NHS and police data, alongside a lack of clarity regarding women and girls’ ages resulting in misleading and unreliable statistics. Data shows that there are now low numbers of children presenting with FGM, which implies there has been a significant shift in attitudes within communities. A recent study by FORWARD, an African women-led organisation working to end violence against women and girls, reveals how professionals are concerned about the nature of reporting and recording, and question the accuracy of the data collected and whether it is resulting in an exaggeration of the prevalence and incidence of FGM.

The creation of suspect communities

Mandatory reporting and FGM safeguarding has led to the treatment of black Muslim communities as ‘suspect communities’, a group considered by the state to be suspicious despite there being no evidence of criminal behaviour. This has led to social dislocation and discrimination. ‘Everyone is a suspect, you are guilty until you are proven innocent’, a parent stated in a 2019 report written by Saffron Karlsen on the experiences of the Somali community in Bristol.

In conversation with Karlsen, she reiterated that it is unclear how the data collected is being used and how it can lead to the interrogation of families by statutory services. Some allegations have resulted in children being put into care, only to be given back to their families sometimes months later after no evidence of real risk of FGM was found. As campaigner Zainab Nur from Hidden Voices UK, a grassroots groups challenging the harmful impacts of anti-FGM measures, told the BBC, ‘these policies are having a massive impact, we’re being victimised, we’re being racially profiled as being at risk of FGM, and it’s affecting us.’

Policing of schools and borders

The mandatory reporting duty holds safeguarding staff responsible if they fail to notice FGM, a duty that ultimately should not fall upon teachers, police, or border control staff who are often not specialised in dealing with such cases. As one mother said, ‘teachers and schools are frightened. They see a little thing and assume something is happening … and any mistake will be blamed on them’.

Interviews in FORWARD’s study reveal the distressing impacts of reporting families to the police without their knowledge. For this has resulted in the questioning of parents by the police and social services if they merely plan to take their children on holiday to Somalia. Often, they are forced to sign a declaration form agreeing not to allow their daughters to undergo FGM.

Two mothers explained how they were threatened with their children’s passports being confiscated if they didn’t comply with FGM Protection Orders, under the Serious Crime Act 2015. From July 2015 to July 2020 there have been 614 protection orders granted in the UK. Another concerning issue is the impact of Operation Limelight, under which passengers travelling between the UK and countries where FGM is deemed prevalent may be stopped for questioning and have their baggage checked by the UK Border Force and the police in airports.

Loss of trust and social dislocation

The treatment of Muslim families as ‘suspect communities’ leads to a lack of trust in statutory services. Communities believe that medical staff are prioritising the collection of data, as instructed by the mandatory reporting duty, over the participants’ health needs. Safeguarding procedures carried out without consideration of previous trauma for many survivors of FGM results in ‘putting salt on the wound’, for instance doctors asking intrusive questions without sensitivity during gynaecological and antenatal examinations. Due to the loss of trust in statutory services, many are afraid to seek help due to fear of being reported to social services – which mirrors the way that some Muslim people avoid mental health services for fear of being reported to PREVENT.

Participants in Karlen’s study believed that this was negatively impacting on the grassroots campaigning work being done by the community, who felt their work was being ‘discounted’ and ‘undermined’, leading to increased social dislocation, distancing from statutory services and a detrimental impact on families’ mental health.

What must be done?

More must be done to show the negative impacts of FGM safeguarding on marginalised communities. Like Prevent, the evidence shows that mandatory reporting (and recording) of FGM has resulted in institutionalised Islamophobia when used in schools and at borders. Whether this was inevitable and inherent in policy is unclear, but what remains necessary is a thorough analysis of its stigmatising impact. An urgent review of the data and statistics surrounding the incidence and prevalence of FGM in the UK must take place in order to dispel myths surrounding communities and focus on truly protecting women and girls through a community-centred policy.

There will continue to be a debate within the anti-FGM movement about the decriminalisation of FGM, but what remains urgent is that funding and resources should be diverted from safeguarding procedures into community services, education and provision of specialist health care clinics that remain the best way to support communities.

Unfortunately, the government is doing the opposite by funnelling huge amounts of money into anti-FGM safeguarding which, as demonstrated above, has hugely stigmatising effects, whilst cutting support for the very specialised services that communities rely upon, most recently the domestic violence charity Sistah Space in Hackney, which has been evicted from its premises. The work of grassroots organisations that do the crucial, yet under-recognised work of challenging sensationalist anti-FGM narratives and drawing attention to their destructive impact on families and communities must be foregrounded.