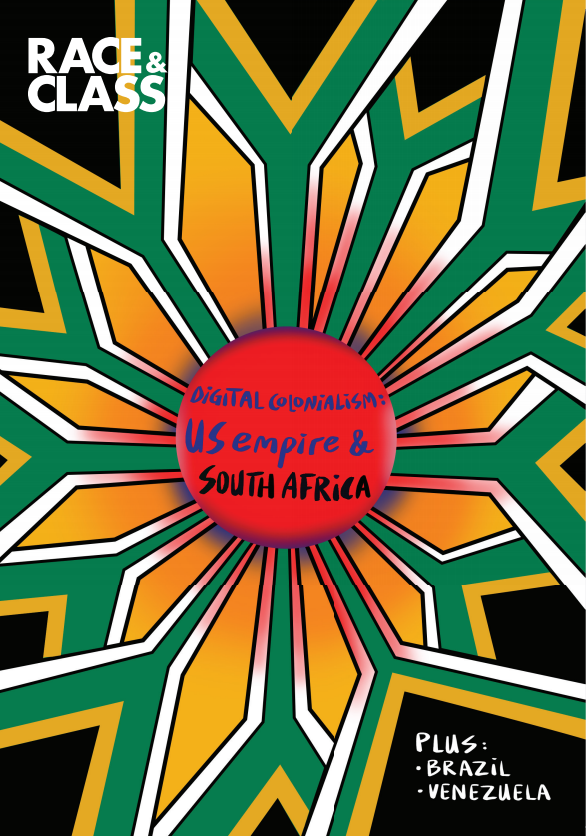 The April 2019 issue of Race & Class shows how the reinvention of colonialism through the domination of digital technology and transnational flows of securitisation is being met by unique forms of resistance.

‘Today, a new form of corporate colonisation is taking place’, argues Michael Kwet, ‘Instead of the conquest of land, Big tech corporations are colonising digital technology’. Kwet, a Visiting Fellow at Yale Law School, reveals in a path-breaking article, with South Africa as an example, how the US is reinventing colonialism by exerting structural control of the tech ecosystem, leading to perpetual resource extraction and US economic and cultural dominance in the global South.

And as US multinationals exercise imperial control of the digital world, flows of securitisation also travel via geopolitical relationships. Chandni Desai and Heather Sykes, faculty members at the University of Toronto, trace the flow of securitisations between Israel and Brazil, showing how Israeli companies use Gaza as a ‘lab’ to develop weapons, policing techniques and security technologies that is then sold at the Olympics to police the favelas. The way that favela communities in Rio were perceived and violently policed during the 2016 Olympics resonates with Alan MacLeod’s timely article on how western media represents Venezuelan chavista supporters (who are mainly working-class black communities) as dangerous ‘gangs’, hoards or mobs.

As Jair Bolsonaro was embraced by Israel’s prime minister Benjamin Netanyahu at the presidential swearing-in ceremony in 2018, revealing the deepened relations between the two rightwing leaders, Desai and Sykes also highlight the ‘the unique forms of solidarity from Brazil to Palestine’, through which global struggles against the policing and militarisation of oppressed communities are being strengthened.

And actively recalling these anti-racist histories of resistance is an important political act. As Jasbinder S. Nijjar writes in his commentary on Southall, a key community of resistance in the UK, ‘out of systemic racial oppression comes political awakening, collective organising and persistent campaigning – guidelines for resisting the many forms of contemporary racism.’

Nobody cares about your bs propaganda you pathetic clowns.