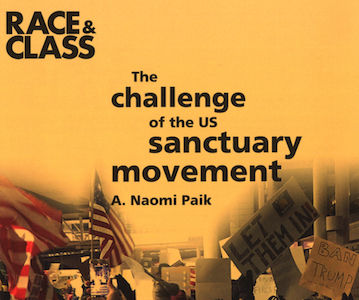 How, asks the October 2017 issue of Race & Class, are societies attempting to corral non-white surplus populations, especially when they resist their racialisation?

A. Naomi Paik, an expert on US imperialism and incarceration, examines the ways in which the current US cities’ sanctuary movement (for new migrants) opposes the Trump regime and how it could be radicalised along the lines of the prison abolition movement. Mark Jay and Philip Conklin, Detroit-based activists, taking issue with Wacquant, argue convincingly that ‘broken windows policing’ like the introduction of stop-and-frisk in the 1960s, was an integral part of strategies to deal with the resistances of a section of the black working class as gentrification hit their city. Urban sociologist Parastou Saberi exposes Toronto’s community policing strategies as no more than a desperate attempt to contain resistance in ‘immigrant neighbourhoods’ so as to prevent the ‘Paris problem’, ie the possibility of ‘race riots’. Australia is a step ahead – not allowing would-be migrants on to its territory, keeping them offshore on Manus Island, where, as criminologist Michael Grewcock reports, they are, for demanding basic human rights, punished for their very existence.