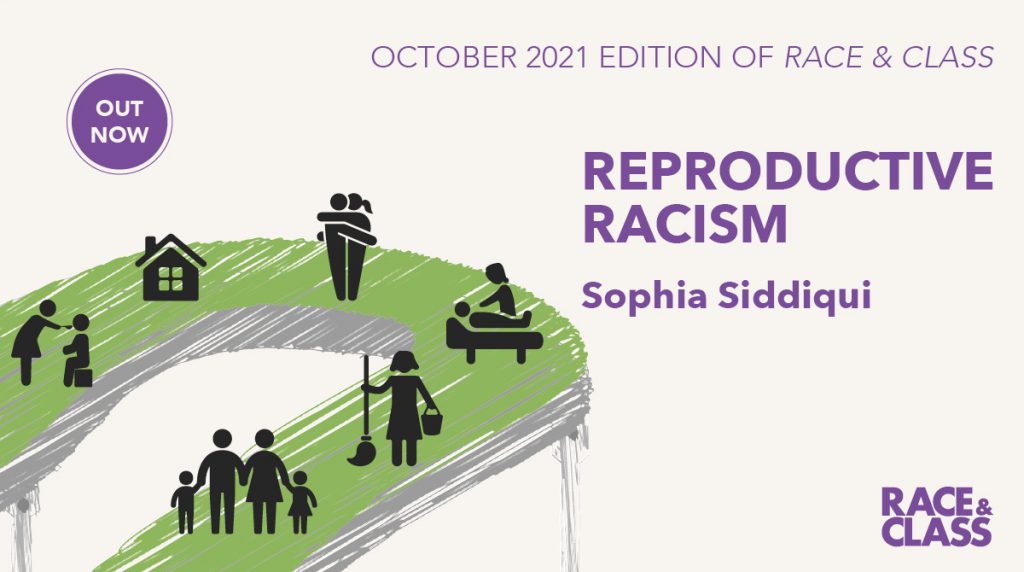 In the lead article of the October 2021 issue of Race & Class, Deputy Editor Sophia Siddiqui charts new ground showing how reproduction is now a key dividing line in European racism, with global implications.

The publication of ‘Racing the nation: towards a theory of reproductive racism’, which documents how the maintenance of the heteronormative native family has become the cornerstone of far-right campaigning, whilst migrant women uphold a breaking care system, could not be more timely. Only last month, right-wing leaders from around the world met in Budapest for a demography summit in defence of the nuclear family. ‘Increasingly the number of European children is essential to preserving Europe’s Christian culture’, states a joint declaration signed following the event, ‘immigration is not the solution to a falling birth rate in the EU’.

Women are placed at the centre of this new racism and feminists are now charged with facing up to new challenges. For this is just one example of how anti-migration agendas merge with the misogynistic notion of women as the ‘womb of the nation’– who must reproduce in a demographic race against ‘others’. This amounts to a nativist demographics that Siddiqui names ‘reproductive racism’ – a new dividing line in European racism, with global implications.

Based on the monitoring of events in Poland, Hungary, Spain, Germany, Italy, France and the UK over the past two years, the article examines the exclusions that are inherent to family policies of the Right and shows how mobilisations against ‘gender ideology’ and far-right conspiracies like the Great Replacement Theory play out in different contexts. As elements of the far Right gain political ground on issues concerning the family, sexual rights and reproduction, this article could not be more urgent for scholars, activists and researchers looking to understand what is going on in Europe and beyond.

‘This is a racism that is central to the extreme Right, which uses certain women’s bodies as conduits for the production of national identity whilst propelling conspiracy theories of a demographic takeover by migrants, Muslims and increasingly LGBTQ people’, Siddiqui believes.

But reproductive racism is simultaneously embedded in society another way, too. Whilst migrant women are essential to the reproduction of the nation – as carers, domestic workers and cleaners in the midst of a care crisis – nativist policies banish them from the social arena and immigration laws ensure their work is hyper-exploitable and precarious. Often separated from their own families, a predominantly feminised workforce is employed to look after the more affluent native class.

This article incorporates scholarship by Black feminists, social reproduction theorists and anti-fascist feminists, as it also tracks the resistances that are emerging in opposition to anti-equality politics, which have implications for women, migrants, Muslims and anyone who does not fit the mould of the heteronormative nuclear family.

‘Understanding the overall system that entangles us all in the context of globalised capitalism offers the possibilities of coalitional practices of anti-racist feminisms that centre on broad visions of solidarity’, she argues, ‘Feminist strikes happening around the world have already made these links clear, by recognising that race, economic and gender justice are indivisible – one cannot be deal with without the other.’

Read ‘Racing the nation: towards a theory of reproductive racism’ for free download.

Good that you are speaking on these topics. I’ve not heard much about support on the reproductive spectrum in years before recent tines. After the reproductive matter was highlighted a number of thing began to be exposed. As per usual black people bear the brunt of most of it. I’d like the opportunity have children but I’ve roped up on a really nasty and twisted situation which begs belief. You see, I live next door to racists and on top of racists and they’ve driven a campaign against me for years. Imagine the things they say reach to the Police, TFL, LAS the LFB even within the NHS itself. I realised how malicious certain people can be and what racism really looks like in the UK. This is racist hate on no other level. I’ve had to deal with one thing to the next and this also involves the council and the reach is the NHS. I’m aggressively harassed and so much so that stress and health issues set in, things are done that aren’t even speakable but if no one knows whose goign to be able to act on this. My home was flooded out! The cpuncil take sick doscriminatory measyres to cover over rhe thigs they don’t do.
Floodings and leaving my home in utter degredation then leads to further health issues. The people next door and below do the most alarming racist things and this entailed false reporting to police, creating stunts and staging things. It’s tk rhe point my communication is tampered with and so much more. I feel a lot more can be done. Not coming of topic but there needs to be a whole overhaul method of tackling hard topics on racism and the scope it reaches. Even in health and reproduction issues – NHS. It starts from hearing black and ethnic people then pitting thigs in place to actually help develop strategies to resolve them effectively. One initiative came out of the Covid pandemic but it takes mass deaths on a disproportionate scale in a short period of time to have anything set up. That organisation needs input from the likes of this and then needs to effectively work with others that can actually develop structures to support this.

Hi, I ordered the pamphlet on reproductive racism, it hasn’t arrived , it is probably because of the Postal service, normally people are employed to help at Christmas but that hasn’t happened this year and they are overwelmed, I thought I let you know.
In solidarity
Caterina

Hi Caterina, sorry to hear your order didn’t arrive. Please could you email us at info@irr.org.uk with your order details and we will look into it for you. I don’t think we’ll be able to get it to you before January as we have closed the office but will be sure to get it to you in the new year. Best wishes, IRR team.