On Friday 2 August, Romani rights activists and supporters commemorated the Roma Holocaust and protested at Europe’s continued mistreatment of the Roma.

In 1944, on 2 August, Nazi guards at Auschwitz murdered almost 3,000 Roma at its ‘Gypsy family camp’. This is now the memorial day of the Roma Holocaust – or Porajmos (the ‘devouring’) – in which an estimated half a million Roma people were put to death. Romani rights activists gathered in Hyde Park to learn the lessons of this history, and to take heed of an anti-Roma racism that is reaching fever pitch across Europe. 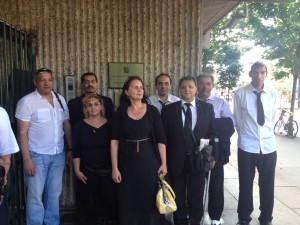 The day began with a protest outside the Czech embassy, against the rise of neo-Nazi attacks against the Roma in the Czech Republic and Slovakia. Delegates from the Halifax Roma Group, Europe Roma, the Roma Virtual Network, the European Roma Rights Centre and Derby’s Roma Community Care were among those who gathered to hand a letter of protest to the Czech Ambassador. 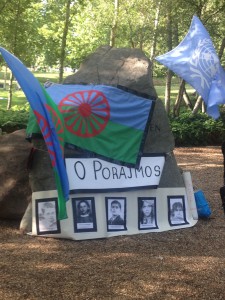 The group then journeyed to Hyde Park’s Holocaust Memorial to meet others who had come to commemorate the Porajmos. Grattan Puxon, a Gypsy, Roma and Traveller rights activist, told IRR News that the same Nazi feeling of the 1940s was gathering pace today:

‘We see the racism against Roma turning into ever more acts of violence and murder almost everywhere in Europe … The problem is even mainstrem governments are failing to curb the threatening revival of fascism and are themselves adopting anti-Roma policies – which include mass evictions and deportations.’

The next stop was the French embassy, for a protest against the enforced evictions of Romani people from camps on the outskirts of Paris, before protestors made their way to Marble Arch, where, earlier this year, the process was mirrored – homeless Romani people were rounded up by the Metropolitan Police, with the aid of Romanian police officers and UKBA immigration enforcement officers, in a ‘voluntary’ deportation programme bizarrely dubbed Operation Chefornak.

The protests of 2 August were a timely rebuke to a mainstream media that blames Gypsy, Roma and Traveller people for their own persecution, misdiagnosing the rise of violent anti-Roma fascism as a response to the inherent criminality of the persecuted, rather than the result of a pan-European policy of criminalisation, pauperisation and deportation.

Read an IRR Briefing Paper: From Pillar to Post: pan-European racism and the Roma

Read an IRR News story: ‘It’s like a war‘

Read an IRR News story: ‘One stunt too many‘

The treatment of Romani people can be appalling. The holocaust was beyond evil (we should consider all of it’s victims) and the behaviour of some of the European governments is completely wrong. However, to bring up the holocaust in reference to the moving on of Romani people in Marble Arch is disingenuous and fails the Godwin test in the first paragraph. And (nothing to do with race – everything to do with learned behaviour) the Romani culture is a largely parasitic one, feeding on the host whilst generally contributing little. I have no idea of how to deal with this situation as human rights should be paramount but you’ll excuse me if my sympathy for the treatment of Romani by the UK state (in most cases) is somewhat tempered. To talk about the police moving people on from a public place in the same way as the acts of Neo-Nazis in Eastern Europe is trying to take advantage of the generally compassionate nature of British people. I have found the people in this country generally the least xenophopic I have come across in the fifteen years I have lived here. I believe I have a right to live in this country but for this I am grateful and this right comes with a responsibility to contribute.

To draw attention (on the occasion of Roma Holocaust Day) to the stigmatisation of Roma across Europe and heavy-handed police operations in London is not to equate what happened at Marble Arch to the Holocaust. Rather, it highlights the sad fact that the ill-treatment of the Roma has not gone away. Language, too, reflects continuums. To describe Roma culture as a ‘largely parasitic one’ , has resonances with the Nazi view of Jews and Roma as ‘parasitic races’. It is insensitive to the Roma tragedy to say the very least. And the implication that it is not racist to use the term ‘parasitic’ in relation to Roma culture ignores modern fascist thinking, where ‘rationalisations’ have shifted from the terrain of race (lesser breeds) to the terrain of culture (inferior cultures).