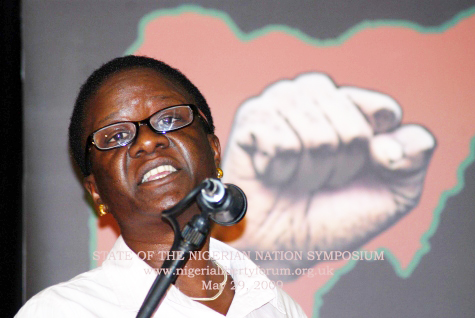 The life and work of a dynamic anti racism campaigner was recently celebrated in Dublin.

Anti racism and refugee rights campaigners, past and present, gathered on 6 September in Dublin to celebrate the life and work of Josephine Olusola Olapeju Olajumoke Amuwo, whose untimely death occurred in London this August.

Although she had been based in London for over ten years, she left an indelible mark on human rights campaigns and campaigners in Ireland. Her Irish friends and former colleagues wished to remember and mark her significant contribution to both anti racism and refugee struggles with a simple celebratory event.

During her time in Ireland in the 1990s, she was instrumental in leading the nascent movement of asylum seekers seeking to speak out on what affected them in the asylum process, rather than have their words ventriloquized by white activists who were not experiencing the dehumanising injustices of the asylum process. She was gifted as both a writer and an impassioned speaker. She used her prodigious talent for communication to vividly describe the intersections between racism and sexism as it manifested itself in the asylum process and to articulate the many ways in which the process impacted women asylum seekers differently. She was a leading light in the Association of Refugees and Asylum Seekers in Ireland (ARASI) the first refugee led advocacy organisation in Ireland and edited their newssheet The Voice of Refugees. She was also a talented journalist and cultural worker and counted Irish writers, playwrights and actors among her broad and eclectic group of friends.

As Robin Hanan, former director of the Irish Refugee Council, recalled: ‘She arrived in Ireland at a challenging time for asylum seekers, who at that time in the 1990s, were facing suspicion and hostility from sections of the media, public and the State. This translated into abuse and even violence on the streets, in meetings and on TV and radio. Like so many of that first generation of ARASI leaders, Josephine paid a high cost for her activism, in personal, career and artistic terms. She was one of the few women able to play a highly public and articulate role in ARASI and this made her something of a target but also an inspiration to other women. While she worried about tokenism, she also understood and accepted the importance of her role as an advocate and an example and she was in constant demand as a speaker and trainer in schools where she became well known, inspiring many young women.’ The significance of what she achieved and how this paved the way for other migrant-led organisations was highlighted at the celebration of her life by Salome Mbugua, director of AkidWa, (national network of African and migrant women living in Ireland), who stated that, although she had never met Josephine Amuwo, she was highly conscious of how the pioneering work carried out by her had highlighted the need for organisations like AkidWa and created the space for them to exist.

Throughout the evening to celebrate her life and service to the cause of refugees, her warmth, dynamism, humour and tenacity were recalled with fondness and respect. Testimonies from more recent arrivals to Irish shores referenced the dire circumstances of those still caught in the nightmarish asylum process, emphasising the fact that the work begun by Josephine Olusola Amuwo is sadly far from over. Activists mourned not just the passing of an inspirational campaigner and activist but also the passing of an era when a more pro active solidarity movement for asylum seekers existed in Ireland, an era now passed as the economic austerity measures have destroyed any sympathies for asylum seekers and fuelled a hardening of public attitudes in general towards immigrants.