The latest issue of Race & Class examines the 2013 ‘riots’ in Stockholm in the light of other recent urban rebellions.

In the new issue of Race & Class, three distinguished academics from Sweden’s Institute for Research on Migration, Ethnicity and Society  examine  the 2013 ‘riots’ in Sweden, comparing them to the August 2011 ‘riots’ in the UK and similar disturbances across the French banlieues in 2005. In this seminal piece, Carl-Ulrik Schierup, Aleksandra Ålund and Lisa Kings, draw attention to the  dynamic, new youth-led urban justice movements, such as The Megaphone and The Panthers, that are contesting urban degregation and the withdrawal of welfare. 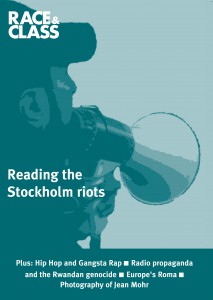 Just as the killing of Mark Duggan sparked the 2011 riots in the UK, the police killing of a 69-year-old man sparked five days of rage among young inhabitants of Stockholm’s urban district of Husby, described by one local politician as ‘a drama of discrimination, poverty, stigmatisation … a city and a society getting torn apart.’ While police violence and racism ignited the unrest, it came on the heels of a decades-long neoliberal experiment.

‘Reading the Stockholm riots’ looks at urban uprisings in terms of struggles against urban policing, the corrosion of citizenship, and the structuring of social inequality. They are, according to the Swedish authors, a way of claiming social justice when all other avenues to do so are off limits. But while those involved in disturbances in the UK were written off as violent opportunists and punished with a heavy hand, there was no mass criminalisation and the legal aftermath of the Swedish disturbances was restrained, and the response of the political classes was more nuanced and sober.