Hundreds of people gathered outside the Daily Mail’s London headquarters on Saturday 30 May to protest against its coverage of the Victorino Chua case, and in solidarity with Filipino healthcare workers. 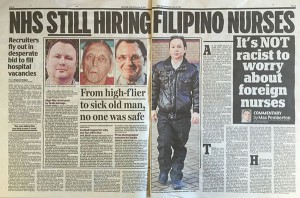 On 18 May, Victorino Chua, a nurse at Stepping Hill Hospital, Stockport, was found guilty of deliberately poisoning twenty-one patients, two of whom died. The day after the verdict, the Daily Mail ran the headline ‘NHS STILL HIRING FILIPINO NURSES’ (19 May 2015) next to a commentary by Max Pemberton, a psychiatrist in the NHS, entitled ‘It’s NOT racist to worry about foreign nurses’.

Throughout the case, the Daily Mail played a significant role in collecting evidence about Chua’s criminal history following his arrest in 2012, travelling to the Philippines as part of its investigations. Statements from Filipino associations in the UK, and comments on the event listing on Facebook, suggests that since the Chua case, there has been an increase in racist abuse against Filipino healthcare workers within the NHS.

– was called for by a number of Filipino healthcare workers. Speakers repeatedly highlighted the importance of Filipino workers in the NHS, and the fact that an incident concerning one individual does not justify the vilification of a whole community. Healthcare workers from hospitals, ex-patients cared for by Filipino nurses, and trade unionists all spoke of the need to stand in solidarity with Filipino workers against racism, and questioned the lack of NHS management presence at the rally. A letter was handed in to the Daily Mail signed by the organisers of the protest, demanding an apology and ‘recognition of the outstanding contribution of Filipino healthcare workers … to the UK’.

The demonisation of whole communities as a result of the actions of individuals is nothing new, particularly by the press and politicians, and migrant communities often take the brunt of Europe’s current xenophobic climate. The rally on 30 May showed resistance to attempts to isolate migrant workers, bringing together Filipino healthcare workers and families.