Racist violence involving public order offences, physical attack and criminal damage has increased, but the Home Office and the media are in denial as to the real causes.

On 16 October, the Home Office released the 2018/2019 statistics on hate crimes in England and Wales with all hate crime (race or ethnicity, sexual orientation, religion or beliefs, disability, transgender) increasing by 10 per cent from the previous year (a total of 103,379  recorded crimes). And in the days that followed, regional newspapers broke down local police force data (More details of this in our calendar.) The data, both national and regional, shows overwhelmingly that while crimes based on sexual orientation, transgender identity, and disability are increasing at a higher rate than those that are racially aggravated, they do so from a much lower base than for race hate crimes (which can also include a mixture of race and religion as motivating factors.) Simply put, race hate crimes continue to be by far the highest category of all reported hate crimes, as they were in 2017/18 and continue to be so today, with (76 per cent) of recorded incidents (a total of 78,991 incidents) categorised as race hate crimes.  From the local data emerges much the same pattern, albeit with variations – two thirds of all recorded hate crimes were motivated by race hatred in Cheshire, Hampshire West Mercia, Dorset, Lincolnshire, North Wales, with that rising to three quarters in Thames Valley and Teeside. 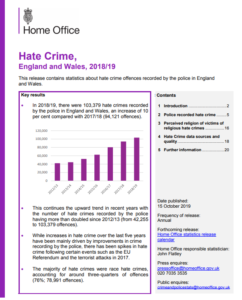 It was very disappointing that nearly all the regional newspapers failed to go out to local representative BAME organisations to discuss the impact of racially- and religiously-motivated hatred on communities. Efforts were made, quite rightly, to discuss the impact of crimes based on sexual orientation or transgender with local groups, as well as Stonewall, but the views of ethnic minorities were largely not sought, though Lincolnshire Live  made efforts to search through its archives and link to its previous coverage of racist and far-right attacks. The fact that the local newspapers did not turn to community sources to comment on these figures, or discuss the impact of Brexit, which was actually mentioned by an Avon and Somerset police spokesperson as giving a ‘mandate’ for hate crime, reinforces what one interviewer  told a recent  Channel 5 documentary on hate crimes. ‘It’s really sad to say, it’s become normalised’.

A recent study by the Equality and Human Rights Commission (EHRC) into racial harassment in universities has also come under criticism. This is because of its flawed methodology. On the one hand it treats racism as a series of incidents carried out by backward individuals who simply hurl abuse. On the other hand, it diminishes the experiences of BAME students by calling claims by white students that they had experienced ‘anti-English’, ‘anti-Welsh’ and ‘anti-Scottish’ sentiments also racial harassment, thereby, as NUS black students officer, Fope Olaleye, explains ‘positioning white people as equal victims of discrimination’. But one statistic buried in the report, which clearly relates to the experiences of BAME students, does call out for further interrogation. Around one fifth of students who were racially harassed and who had reported suffering racial slurs and insults, including the N-word and the P-word, told the EHRC that they had also suffered physical assault.

Reducing everything to a generic  ‘hate crime’, the approach that has become fashionable since the 1990s, tends, as Kehinde Andrews puts it in relation to the EHRC report, to reduce racism to ‘individual encounters’  and a ‘series of incidents’. In reality hate is not an abstract category, and cannot be delinked from the material act, whether it is discrimination or physical violence. And hate is not merely the prejudice shown in individual encounters, but the verbal and physical working out in aggression of racist ideas imbued in individuals by a wider political framework that demonises minorities. Hate when it is expressed is most often violent, ranging from a public order offence on the street or on the transport system to physical assault on individuals and criminal damage to religious and community centres. In other words, the racially aggravated aspect of the offence (i.e. the hate) is accompanied by violence against the person, whether it is verbal or physical. 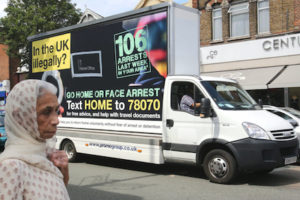 In too much of today’s media debate the hate is being de-coupled from the causes of violence and its impact on individuals and communities.  This is a narrative that might well suit the Home Office, which plays a rather schizophrenic role, overseeing the hostile environment towards immigration, while having a responsibility to fight the hate crime that anti-immigration and xeno-racism engenders. This may explain the Home Office’s crass decision to release a video on Twitter encouraging people to report racists hate crimes, in which a young black man talks of being told to ‘go home’ by strangers, despite the same Home Office deporting black citizens and emblazoning the very same message ‘go home or face arrest’ on vans in its notorious 2013 advertising campaign. And it could also explain the self-satisfied approach of the home secretary, Priti Patel, who told a parliamentary committee that the rise in hate crime was a ‘good thing’, as it showed the police were doing their job. While the recently released Home Office statistics, do acknowledge that there were spikes in attacks following the EU referendum and the Manchester and other terror attacks, the analysis accompanying the release of the statistics suggests  that the increase in reported incidents reflected increased public confidence in reporting hate crimes. But this is just an interpretation, as it is not backed up by hard evidence.

Preparing the ground for the Right

It is now  feeding into the racist frameworks of the hard Right of the Conservative party, as well as UKIP and the Brexit Party, which argue that hate crime is trivial and people are just becoming too sensitive to prejudice and need to ‘man-up’.  Karen Harradine, writing in Conservative Women (‘Hate crimes are the only ones that count for our PC police’) claims that ‘anyone can alert the police to perceived slights against their identity and the police are then compelled to investigate, no matter how nonsensical the accusation is, leaving them with less time to tackle real crime’.  And Brexit party candidate, Stuart Waitron, a lecturer at Alberta University, Dundee, says concerns about Nazi salutes on the football terraces is an ‘overblown moral panic’ and that far from racism being on the rise, people are just more sensitive to it.

One exception to this approach by politicians and the media was Channel 5’s excellent Hate Crimes: Uncensored produced by Zeppelin Films broadcast on 21 October and still available on Catch up. Director Mark Henderson’s approach involved no reporter, no voiceover, no expert ‘talking heads’ but the giving of authority to the victims of racist violence to tell (and analyse) their own stories, with their testimony backed up by film of actual incidents, including racist rants caught on mobile phones. Those interviewed included a Greek photographer called a ‘smelly, dirty foreigner’ and subjected to a vicious physical assault, individuals present at the scene of the Finsbury park mosque attack in 2017 when a van was driven at speed into a crowd, the daughters of 75-year-old Mohammed Saleem who was stabbed to death in Birmingham in 2013 by a Ukrainian fascist, as well as African-Caribbean men and eastern European women who have been at the butt end of racist abuse and discrimination. In contrast to the local newspapers who, for the most part, gave no platform to BAME individuals or their representative organisations to explain the impact and causes of racist violence, those who testified were given space to analyse the cause of the violence, pinning much of the blame on the EU referendum and Brexit, as well as the attitude of the media and the racist comments of politicians. ‘It’s like othering Muslims as though they were a totally different species’ says one young Muslim woman, with interviewee after interviewee adamant that, ‘the people in power are responsible for what’s happened’.

The impact of austerity

One controversial but very necessary aspect of the documentary was the decision to broadcast mobile phone footage of individuals delivering excruciatingly racist  rants on the streets or on public transport, many clearly under the influence of alcohol or drugs.  It gave a sense of the bleakness of Britain and the way society is unravelling under the impact of austerity. Yes, they were poor and uneducated and victims of substance abuse – yet, still,  they are violently abusing others, with ethnic minorities now paying the price for £700 million cuts in community drug and alcohol services since 2015-16, which, according to King’s College London researchers, is leading to a  ‘national epidemic’ of substance abuse problems which are not being  tackled. The public health crisis and the breakdown of community are other factors obscured today in our very limited discussion of hate crime. In this respect, it is worth observing that austerity, often described as a ‘war against the poor’ also unleashes a ‘war between the poor’, with neoliberal policies abandoning communities to the hate, violence and dog-eat-dog mentality that austerity engenders.  As another Channel 5 interviewee put it, ‘it’s a free for all’.

**Karen Harradine has asked us to point out that she is not a member of the Conservative Party.**

Wikifreaks,We kinda find this quote very amusing “Karen Harradine has asked us to point out that she is not a member of the Conservative Party.” and her work more than valuable…..