The April 2015 issue of Race & Class argues that Northern Ireland’s BAME communities have been living the peace process in reverse. 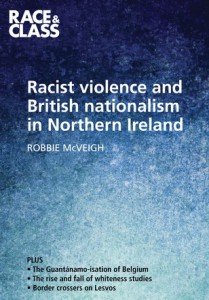 In 1971 British Home Secretary Reginald Maudling suggested that the situation in Northern Ireland amounted to ‘an acceptable level of violence’. During ‘the Troubles’, this became the de facto security policy of successive British governments prepared to countenance a ‘manageable’ level of paramilitary activity. This reality supposedly changed irrevocably with the peace process and the 1997 Good Friday Agreement.

Over the last fifteen years, however, Northern Ireland has been dubbed ‘the race hate capital of Europe’ with the ‘targeting of ethnic minorities’ by loyalist paramilitaries characterised as ‘ethnic cleansing’ by the police. As Robbie McVeigh argues in ‘Living the peace process in reverse: racist violence and British nationalism in Northern Ireland’, this reality has profound implications – both for the future of Northern Ireland and for the ways in which we understand the relationship between the state and new forms of British nationalism across the UK.